The Future Group is announcing technology today that blends real-world video with virtual worlds in an attempt to immerse people inside something like an interactive game show.

The Oslo, Norway-based company is coming out of stealth today. It has raised $8.5 million to date, and it is working closely with an unnamed game show production company on a major project, according to cofounder Bård (pronounced “Board”) Anders Kasin in an exclusive interview with GamesBeat.

Kasin, a former technical director at Warner Bros. and a veteran of using game-oriented technologies in The Matrix films, said that he and cofounder Jens Petter Hoili, a retail expert, have big plans. Kasin said he got the idea to build the technology as far back as working on The Matrix.

“We saw gaming applied to the film pipeline, and since then we have seen a huge change in what we were able to do in real time,” Kasin said. “This is the accumulation of dreams that people had for many years. And the technology is finally there to do it.”

The Future Group’s first project will debut on prime time in a game show on a major TV network, and its virtual world will be accessible on computers and mobile devices. The unnamed partner is one of the biggest game show makers in the world, the company says. The show is expected to debut in 2016.

It’s hard to visualize without seeing it, but the company isn’t yet authorized to show off what it can do, beyond the still frames shown in this story. In the image at the top, one of the actors swings the bat and launches the egg far into the world.

Kasin came up with some examples of what is possible. If you had a game like Angry Birds, you could have a game show. A contestant in a live studio could fire a full-sized slingshot at something in the virtual world, like a giant castle for piggies. Or you could have game show contestants drive in a motion simulator for kart racing and then drive through a virtual environment. At home, viewers could participate by using a tablet to drive the kart. Players could try to beat the race time for the game show contestant — and maybe purchase boosters via microtransactions to do better in the game.

You could, theoretically, combine a game like Temple Run, with an animated landscape, with an Indiana Jones-like live video actor running from a giant rock rolling down a hill. 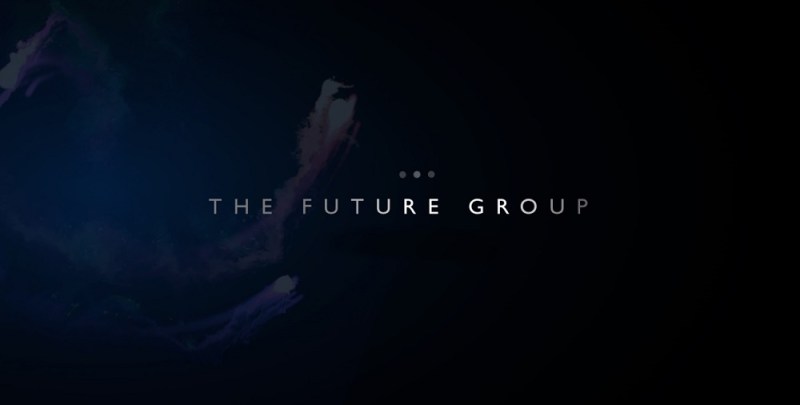 Above: The Future Group’s logo — a virtual game show will soon debut.

Altogether, between The Future Group and the game production company, about 200 people are working on the project. They’re taking on the difficult task of making live video of actors blend seamlessly in a virtual world. It will be as if the people are cut out from a film, using “green screen” technology, and inserted into a computer-animated environment where you can’t tell the difference between video and animation. I saw an unreleased video of what the company has in mind, and it’s cool.

“There are so many different markets involved,” Kasin said. “We have people spread through Europe with a lot of partner companies. You have TV, games, studio systems, and the e-commerce platform. We’re trying to make it brilliant because we know we have to do that in order to succeed.”

The team started with the idea of augmented reality, or putting animated things in the real world, via something like glasses. Instead, it veered off to put real people into an animated world.

“In The Matrix movies, you had people moving into a virtual world, and we’re kind of doing the same thing now,” Kasin said.

The virtual environment will be built with the Unity game engine, with technology built on top of it. And the game studio is essentially being moved into the game engine, Kasin said. The technology will use motion trackers to track movements and translate that into the virtual environment in real time. The technology could work for either live shows or edited, time-delayed programs. A company could port a Unity-based game into the Future Universe, as Kasin calls the tech.

“We put Unity in the film production pipeline to make the process happen in real-time,” Kasin said. “We are building an entire online world. You can compete against the TV show contestants while the show is airing. But you can also just play in the game world. The more you compete, the more chances you have for prizes.”

“We’ve based our technology on equipment that the audience already uses today,” Kasin said.

The company is raising a new round of funding now, and it is seeking investors from around the world. The Future Group is working on a variety of content, but the game show will be the first us of the new interactive platform.

Developers will use the platform to blend the real world video with the virtual environment. And consumers will access a mobile app that they could use to participate in the content. That participation could range from simply voting on what will happen in the game show to things that are more interactive, too, Kasin said.