Humans were nothing until civilization rose from its cradle to dominate the world. You got to experience that in Civilization V, and now developer Firaxis Games is working on a sequel that will follow humanity into the future.

Civilization: Beyond Earth is in development now, and it will have gamers exploring, expanding, exploiting, and exterminating on an alien world later this year on the PC. As a sequel to one of gaming’s biggest strategy franchises, I can’t wait to set up my off-world colony and research sci-fi technologies … and I’m not gonna wait.

Civ V debuted in 2010, and in years since, fans have released tons of mods. Some give you deeper insight into what is happening in the game others completely remake Civ V in the style of Game of Thrones.

Well, we’ve gone ahead and dived into the Steam Workshop, a place where modders can release their creations for others to easily install, and we’ve found some add-ons that will enable you to start going into the future in Civ V right now.

If you think a sci-fi Civilization on an alien planet sounds like a brilliant new idea, you’re wrong. It’s actually a brilliant old idea. Sid Meier, the creator of Civilization, first explored the concept in Alpha Centauri, a 1999 turn-based strategy game for PC. Beyond Earth is a spiritual successor to that series, but it won’t use the Alpha Centauri name since publisher Electronic Arts owns that property and Firaxis now works with publisher 2K Games.

But don’t worry about old Alpha Centauris and new Beyond Earths. You can get a similar experience to both in Civ V right now with a handful of mods. While some of these mods require the Gods & Kings mod, they should all also work with the latest add-on, Brave New World. 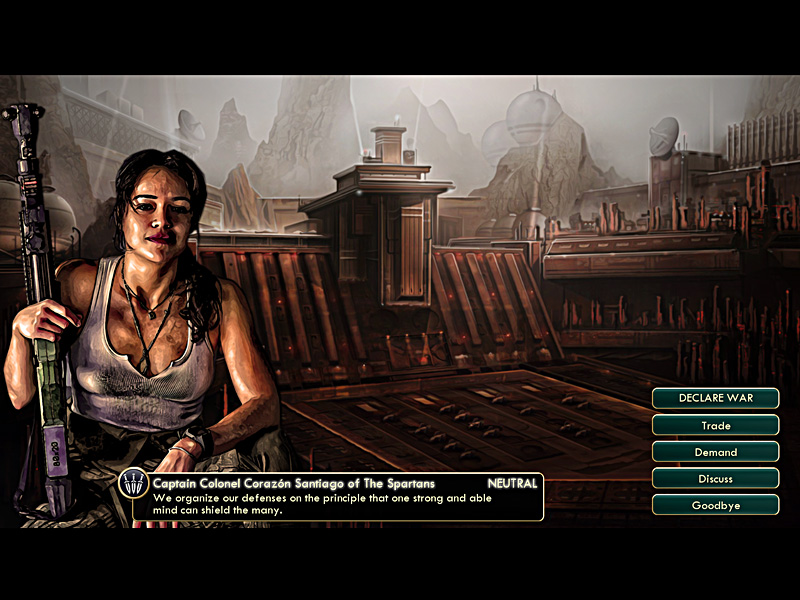 Above: The leader of the militaristic civilization in Alpha Centauri comes to Civ V.

In the future, we’ll no longer belong to nations. Everyone knows that corporations, religion, and private militaries will run the planet. Alpha Centuari had those, and modder Framedachitecture brought them into Civ V with this mod.

This add-on introduces civilizations like The Lord’s Believers, The Spartan Federation, and The Human Hive to Civ V. It also includes their unique leaders. For Morgan Industries, you’ll control Nwabudike Morgan (which the game represents with a picture of actor Morgan Freeman). Naturally, each civ also has its special ability and unique buildings and units.

In Alpha Centauri, players didn’t choose social policies. Instead, you got to use “social engineering.” The end result was basically the same, though. Your civ gets bonuses for different choices. Each category (politics, economics, values, future) had four choices, and they all worked differently with one another. Naturally, things like a fundamentalist government worked better with a society that valued power and was capable of thought control.

This mod brings that classic system into Civ V.

The Earth is cool, but other planets won’t necessarily have the same combination of blue, green, and brown that dominates our world. This mod adds a sci-fi flavor to Civ V by re-coloring the terrain to look more alien. It also adds the sea resources kelp and minerals to the maps. Finally, and frighteningly, this mod can cause xenofungus to overrun parts of the map. And if a unit ends its turn in one of those areas, mindworms could infest it.

Civ V introduced city states, which are one-city nations that the computer controls and players must deal with. They’re named after historically major cities like Kiev, Antwerp, and Vatican City. Places that would look completely ridiculous getting swarmed by xenofungus.

To fix that, you’ll need the Alpha Centauri States mod. This introduces 16 new city states all taken from city names that Sid Meier used in Alpha Centauri expansion Alien Crossfire. The mod creator, HandyVac, even wrote up each cities history for the in-game encyclopedia. 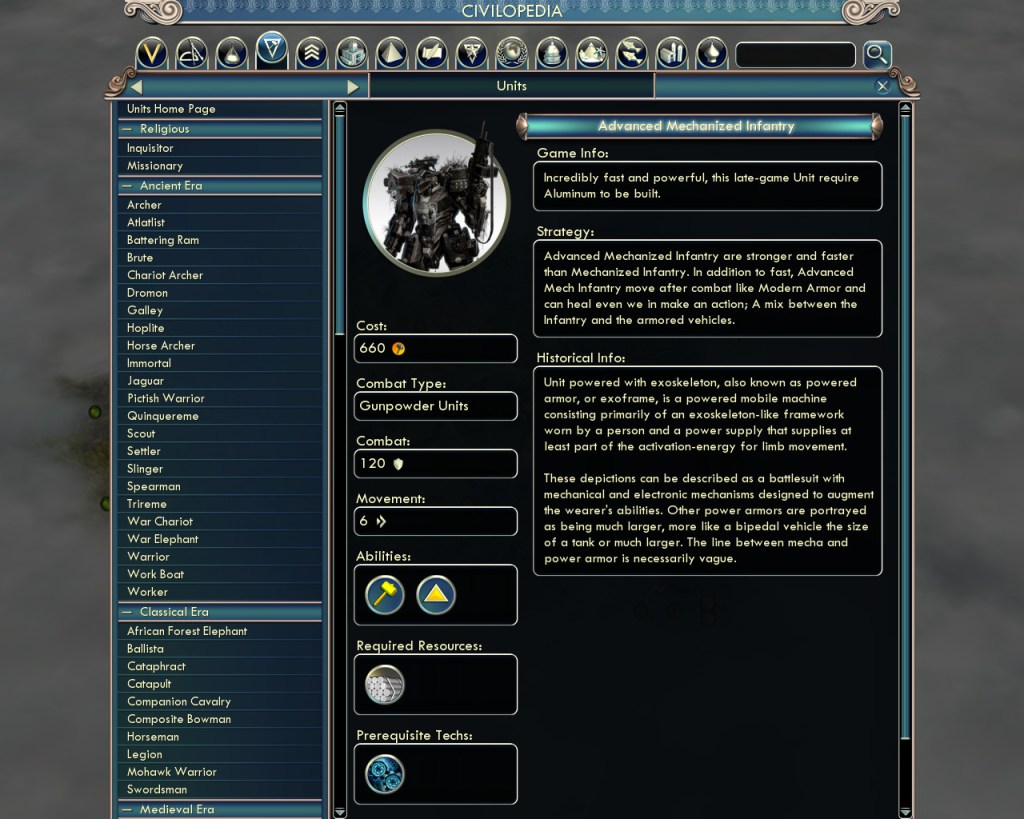 Above: The supermech in the Civ V mod Beyond the Future.

OK, so now you have the maps, civilizations, policies, and states of Alpha Centauri. That’s great, but it’s going to look pretty dumb if you’re using all that through the Ancient Era and using sticks to fight each other.

Beyond the Future is the mod that fixes that and should really bring this whole thing together. It expands Civ V’s “Future Era.” That means new sci-fi technologies to research, buildings to build, and wonders to construct. Those include things like a biofuel refinery and railguns.

The above mods should give you a fresh experience in Civ V that will approximate what you can expect when Civilization: Beyond Earth finally debuts in Q3 this year. Of course, you could also just go back and pick up Alpha Centauri itself.

GOG, an online store that specializes in old PC games, has Sid Meier’s Alpha Centauri available for just $6. It is also fully compatible with Windows XP, Vista, 7, and 8 as well as Mac OS X.

Between this and the mods, you should have plenty of futuristic 4X-ing to hold you over well into … the future!