SAN FRANCISCO — The new Gauntlet reboot is being developed by Arrowhead Game Studios and published by Warner Bros. Interactive Entertainment, with a release date of summer 2014. I had a hands-on preview at the Game Developers Conference last week, and Gauntlet felt like a nice combination of nostalgic appeal and modern design conventions, but the lack of planned console releases is confusing. This is a game made for control pads, not a mouse and keyboard.

The original Gauntlet was a simple game. You chose one of four characters, Warrior, Valkyrie, Elf, or Wizard, walked around dungeons from a top-down perspective killing monsters, walking over treasure boxes for gold and little roast turkeys for health, finding keys that could remove walls from the playing area and open up new parts of each level, and most important, slamming quarters into the machine to keep your characters alive.

The new Gauntlet sticks to the original formula in spirit. The isometric camera is almost placed top-down. The character classes have the same relative strengths in terms of ranged vs. melee, but they have special attacks with cooldowns. Instead of using quarters to bring a dead character back to life, you draw off a communal pool of gold that the party collects. Arrowhead sampled the sound of a key being picked up from the arcade game, and hearing it every time one of us picked up a key during the demo was a satisfying nod to the original.

That nostalgia angle is wearing thin, though. I tried to discuss the ways that the new Gauntlet played off the spirit of the original arcade game with another journalist I met at the demo, but he was too young to remember the coin-op machine. Arrowhead has modernized the original design with gaps in the level to jump over and environmental hazards, health bars for common enemies, and more powerful, less common monsters that could soak up a lot of damage. It felt like the demo ended just before we were about to fight a Boss. 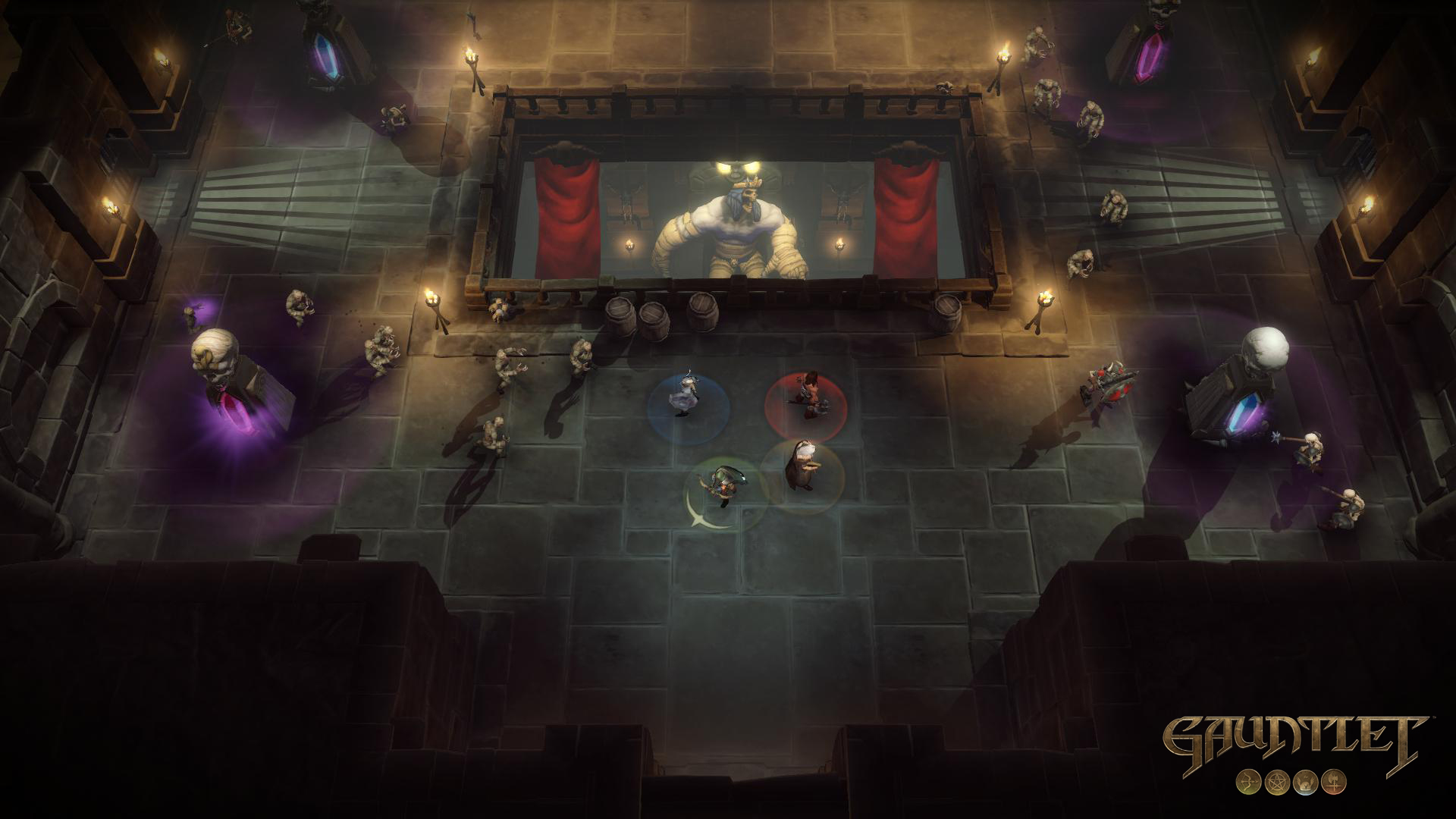 Above: Tell me that mummy isn’t going to turn out to be a boss.

Making a reboot of an almost 30-year-old game that feels authentic to a veteran of the arcade version, while using modern design elements to make an engaging title for players fresh to the franchise, is no small feat. I only had a taste of the new Gauntlet, but the impression I walked away with is that Arrowhead is on the right track, so I was surprised when I asked what platforms the reboot was being released on and was told “Steam.”

The Gauntlet reboot is essentially a variation on the twin-stick shooter. It lacks the complex systems that lie underneath the hack-and-slash mechanics of a PC dungeon crawler like Diablo. It’s an arcade experience that feels perfect for a simultaneous Xbox Live/PlayStation Network release. Playing with the control pad felt so good.

Maybe it’s inevitable that a console release will follow a premiere on Steam. I hope so, because most of my PC friends refuse to give up mouse and keyboard, and I can’t imagine playing the new Gauntlet that way.