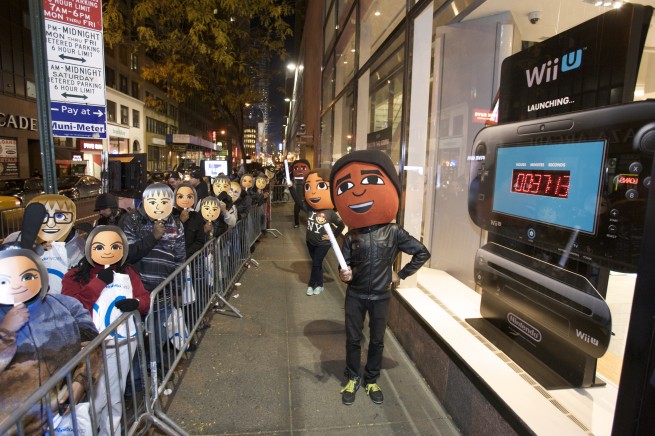 You may have trouble finding a Nintendo Wii U video game console in the short-term.

The Wii U Deluxe is sold out everywhere that I have checked. The basic model is almost as scarce, but I was lucky and found a few. Leading up to the launch, we’ve heard that the Wii U preorders were completely sold out and that it would be difficult to get your hands on one. GameStop, the nation’s largest video game retailer, reported that it made 1.2 million preorders for the Wii U and that it has a waiting list that stretches beyond 500,000 people, but that’s not quite as dire as it sounds.

I want to buy a Wii U, so I started calling store in my area to find my newest system. Here’s what happened. Your results may vary:

The video game retailer is out of Wii U consoles, and the employee I spoke to, Sarah, didn’t know much. She did explain how the waiting list process works. Anyone who preordered a Wii U has 48 hours to claim their Wii U. For anyone who doesn’t, they call the next four people on the list. Each store has its own set of preorders, so some stores will take longer than others to fill out the list.

Sarah told me that anyone on their list should get a call pretty soon since her list is much smaller than that of other stores.

Surprisingly, her GameStop didn’t have a midnight launch, but she said that Sunday morning was pretty busy, with gamers filing in first thing to claim their new Nintendo devices.

The woman I spoke with at Best Buy — and this is a theme — didn’t have much information.

She knows that all of the Best Buys in the city sold out their allotment of Wii Us. Best Buy is expecting new shipments every day, so she kept asking me to call back. I think she felt bad. This Best Buy did have a midnight launch, and customers claimed most of those units at that time.

I’ve heard of people having success with Target. That did not hold true for me.

All Targets have the same answering service when you call them. Hitting “4” will automatically patch you into the electronics department. The first three that I called did not have anyone pick up the phone in electronics. And I let that thing ring for a while. I’m assuming that shellshocked store clerks are rocking back and forth in the corner while continuously muddering “WIIU WIIU WEEEEYOOOOU.”

Finally, I called the Target in the nice part of town. Someone answered, and I asked about their Wii U situation.

“Zero,” the clerk gave me as an answer. “We had 14, and 10 of those were reserved. We were out within a couple of minutes after they were available.”

He didn’t know when they would get a new shipment.

After striking out at the bigger locations, I knew I had to try for stores that others might not think of. That led me to Kmart.

Poor Kmart. The young guy in the toy department told me that they only had two Wii Us and others had tracked them down on Sunday. He thinks that maybe they’ll see some more tomorrow or on Friday.

This is my favorite electronics store, but it isn’t going to help me find a Wii U.

Conveniently, this chain has a nice tool on their website that allows you to shop by store. Unfortunately — after checking every store using this feature — I discovered that Micro Center is sold out of Wii Us across the country.

I called to double-check, and the phone operator confirmed that the online tool constantly updates itself and would know better than any human. What’s cool is that if a Wii U does pop up in this system, quick-fingered users can reserve it from the website and pick it up in the store in a matter of minutes. You can probably start your day by checking your local Micro Center’s inventory before making any other calls to Best Buy or GameStop.

This is an independently owned chain with five stores here in Columbus. I stopped going to GameStop because of Play It’s knowledgeable employees and fair prices on trade ins.

Normally, when a product with high demand like this ships, small independent stores are left out while the big kids get everything first.

“Our distributors made us a deal where if we bought a bunch of games they could get us some Wii Us,” an employee told me over the phone. “So we have to bundle a game with the system. You can choose any game you want, but you have to buy a game.”

“Each store has at least one of the basics, but we’re sold out of the Deluxes,” he said.

The hype is real

When a distributor and a retailer make a deal on something like a new system launch, they don’t allot every single console for preorders. So it’s not unusual that GameStop and others would sell out of preorders while more show up on shelves at other stores. That’s what happened Sunday night through today at some retailers, but most of the places I contacted sold out of their stock immediately and demand remains high. So, yes, the hype is real, only it might not be as real as it was with the Wii.

The demand at the time for the Wii meant that customers even scooped up that extra allotment almost immediately. The system was scare for the next two years. Websites sprung up that would send alerts when a store got in new shipments, and those often sold out within minutes.

It’s unlikely that the Wii U is generating that type of excitement, but it’s possible. All I know is that I am leaving right now to go pick up my Wii U.