Corona Black is relentlessly stylish. Indie studio Ota Imon has remixed and amped up the aesthetic of Japanese comic books (or manga). It stars larger-than-life characters — with names like Knife Leopard — who compete in mech battles in a world that shatters into comic book panels. It’s sleek and over-the-top, and it’s clear the developers are having a lot of fun making it. It’s slated tentatively for a 2020 release on PlayStation 4, though the team is eyeing other platforms like the Switch.

When I asked game design lead, writer, and art director Ota Imon (who founded the studio of the same name) why he decided to go for the stark black-and-white look, he laughed.

“The black and white style was mostly because me and my brother, we’re color blind,” said Imon in a phone call with GamesBeat. “I didn’t want to work with colors, because it would be so much trouble for us. So I just got lazy and figured, we could do things the way we wanted, without worrying about that.”

In the absence of color, Imon plays with shapes, lines, and contrasts. He loves asymmetry, slicing away parts of the screen to reveal a closeup of a character’s manic grin before they punch a button to unleash a flurry of torpedoes. When you’re in battle, bits of motion always add interest, such as marquees scrolling past with all-caps letters blazing like visual klaxons.

“This is the first game where we’re going for total black and white and gray, no colors at all,” said Imon. “We’re still figuring out how to make things pop out more. We’re trying to use full white or full black in things that are in the foreground, closer to you, and things that are in the background, we’re trying to use more grays to distinguish that. But it’s shapes and contrast. Contrast is something we try to experience in every way. Even when I’m writing about the characters and the story, we try to use contrast, things that are disparate.”

The Brazilian indie studio cites Japanese anime like Cowboy Bebop and the Gundam series as sources of inspiration, along with Takeshi Koike’s anime racing movie Redline, which Imon describes as having “great contrast, really black shadows.”

When I fired up Corona Black’s short PC demo, I quickly met the game’s colorful cast, like the talented mech pilot Knife Leopard and his beat-up old “gallow” (the in-world term for giant robots); Knife’s trusty anthropomorphic canine mechanic, Duque; and the protagonist of the game, the shifty-eyed Dominique Shade, who has a penchant for running away from his problems and getting in trouble. Above: Knife Leopard faces off against Godworm in a gallow fight to the death.

The demo included one battle and some exploration to show off its dialogue system. My match was against a Mad Max-looking fella named Godworm, and we duked it out in turn-based combat. I could use action points to move, attack, or defend. The bottom of the screen shows where Knife is relative to his opponent. When I struck out at the enemy, I could choose whether I was going for the head, torso, arms, or legs, all of which had a hidden number of hitpoints.

It’s nothing particularly revolutionary, but Corona Black again makes up for this with style. Every action I selected sent a splash panel streaking across the screen. When I decided to patch up my gallow, Duque popped up with a wrench in his paw. And when Godworm landed a hit, a smash-cut showed his fan club cheering, adding a bit of kinetic energy to the experience.

However, the game isn’t just about mechs whaling on each other. The destination is the ultimate giant robot competition Final Fortnight, but the journey is dictated by Dominique Shade coming to terms with his past.

“[Shade]’s a guy who’s trying to find his place in life. He used to be a gangster, and now he has a family and a 14-year-old daughter and a wife,” said Imon. “He has a common life. Because of that, he lost most of what made him a gangster, that stylish way of life he had before.”

When Shade learns that his best friend George has passed away, he goes to Rain City and uses that as an excuse to run away from his family. Corona Black explores his demons as well as the relationships of the people around him. All the characters rally around the goal of winning Final Fortnight, and Shade especially learns to accept his new roles in life. 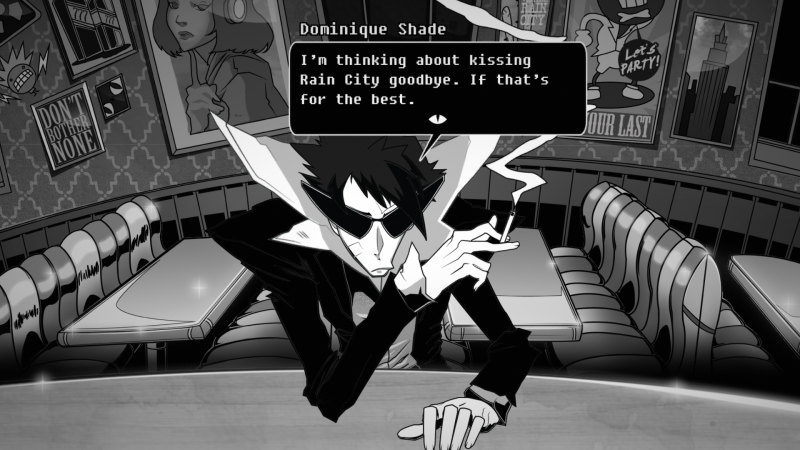 Above: Dominique Shade struggles with accepting his new life as a family man.

Even though Shade’s story deals with heavy topics like depression, Imon says that they try to balance it out with bombastic humor. In the demo, glib one-liners fly back and forth, dripping with bravado. When Knife ends up in the hospital, Shade shows up to poke fun at him.

“It’s kind of hard to know how exactly to balance that. But for me, it’s like a roller coaster. You have to have these over-the-top moments, and then go deep, and then you come back from that,” said Imon. “Even with sad moments, funny moments — I guess the only thing we use to measure that is when things start being too over-the-top, too funny or too deep and sad, then we’re losing control of it. When it gets to a point where it gets annoying or boring, that’s the time to shift. If you don’t have those sad moments, the happier moments won’t have the same impact.”

These contemplative moments occur as you explore Rain City, seeking advice from bartenders and talking to your comrades. Those segments are actually in pixel art — a somewhat startling departure from the rest of the game’s polished graphic novel look. The style shift has gotten mixed responses from the publishers they’ve talked to, but Ota Imon producer Lucas Stannis says that they love playing around with it.

“It actually comes a lot from Final Fantasy VII, that has a lot of HD stuff in the battles, but the chibi-looking characters when you’re exploring,” said Stannis. “I think that’s really cool. It’s good when we make the transition from the pixel art sections to the HD graphic novel sections. We were experimenting a lot with 8-bit music and HD music. Right now we’re experimenting a lot with different instruments for each section, even though it’s going to be all HD music.” Stannis joined the team about a year ago, and he originally started in his career as a game designer before switching roles as he became a producer for fellow Brazilian studio Undevs’ local multiplayer title Sword of Yohh. That experience has helped Ota Imon as it reaches out to publishers about Corona Black.

“When we were pitching Corona, a lot of guys already knew me from Sword of Yohh,” said Stannis. “They were more like, OK, show me what you got, you always bring good stuff. They really liked the demo. What we’re doing now, we don’t have a lot of budget to go to PAX or Gamescom, so this year we’re focused on full development with Corona, and we’re trying to close a deal with a publisher by the end of the year.”

Corona Black grabbed some booth space at this year’s Brazil’s Independent Games Festival in the Panorama Brazil section, which showed off the efforts of local developers. It also demoed at Glitch Mundo, the indie games festival that ran parallel to BIG. Being based in Brazil can put devs at a disadvantage when it comes to getting in touch with publishers and platform holders, but Stannis says that BIG’s business focus has helped a lot. They scheduled a number of quick 15-minute sessions through the festival’s matchmaking system, which attendees can use to set up B2B meetings.

Stannis says that the local community has also been extremely helpful.

“Everyone is struggling with game development [in Brazil] in one way or another,” said Stannis. “If you get a publisher, what kind of deal did you close? How does your budget break down? Some of them are going to ask you about this, some are going to ask you about that. How should you do a contract? Which lawyers should you get to help with the contracts? How do you get on the platforms? Everyone has something they don’t know and something that they have experience with, so you just need to ask. Everyone knows they’re short of something, so everyone is really helpful to one another. I feel like I got a four-year degree in a year, and now I’m here at my graduation.”