It’s a good week for games in São Paulo — and not just because Brazil advanced in the World Cup. Brazil’s Independent Games festival is running for the sixth year in a row, an annual event that celebrates a diverse array of games from Latin America and abroad. It’s free to the public and runs from June 23 to July 1 in both São Paulo and, for the first time this year, it has a satellite festival in Rio de Janeiro.

Brazil is the biggest games market in Latin America, and it’s slated to generate $1.48 billion this year. This steady growth is attracting investments from organizations like Agência Nacional do Cinema (Ancine), which is more than doubling its investments into the industry this year. In 2016 and 2017, Ancine provided $3 million in funds; this year, it has pledged over $10 million. One of the beneficiaries of its contributions is BIG, which counts it as one of its main sponsors.

As the market size grows, so does the indie games scene. In 2013, BIG estimates that the country had around 140 studios — in 2018, it has around 375. The festival aims to show off this local talent as well as bring fantastic titles from overseas, and it’s also created a space where Brazilian developers can connect with international publishers and companies. BIG CEO Gustavo Steinberg said that over 1,500 business meetings were created through the festival’s matchmaking system.

This was the second year I attended, and I noticed that the festival had made some upgrades. Its business lounge, which is where folks can sign up for lightning round meetings, had moved to a stylish airy venue away from the bustle of the show floor. In addition to its focus on games, it’s also folding in other forms of media entertainment, like animation music. On June 30, it will host a series of live concerts throughout São Paulo.

On my first day at the venue, it didn’t feel as packed as last year, but I suspect that’s likely because of the Brazil v. Serbia World Cup soccer match that everyone was gearing up for that afternoon. But many of the games on display are terrific, and I have a few favorites so far, most of which are puzzlers. One is Spherical Pixel’s psychotropic Path to Mnemosyne.

It’s a finalist in the Best Narrative category at the BIG Awards, thanks to the unsettling way it slowly pulls you into its atmosphere of menace. You play as an unnamed protagonist who continually runs forward through a tunnel, urged by some unseen companion to rebuild your memories. Its puzzles are occasionally musical, sometimes spatial, and frequently require you to shift your environment. It has a crackly black-and-white aesthetic, all hand-drawn illustrations, and a driving soundtrack filled with urgency. 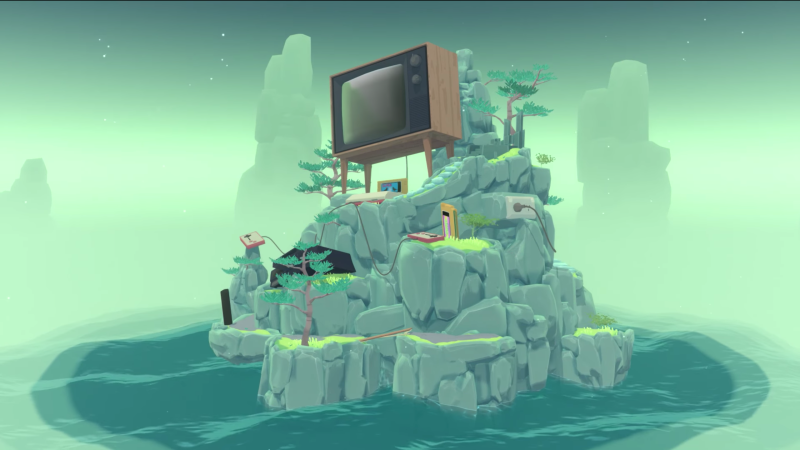 Above: The Voxel Agents’ The Gardens Between is a peaceful puzzler that manipulates time.

The Voxel Agents’ The Gardens Between is also a puzzler, though it has a much different feel. Where Path of Mnemosyne evokes claustrophobia and agitation, The Gardens Between is soft and peaceful, exploring the friendship between two characters who move almost as one. Rather than move them around like in a platformer, they run on a pre-determined path and you can only go forwards and backwards in time. You might fast forward to trigger some change in the environment, rewind, and then go forward in time again, this time unchallenged by any obstacle. The game has a dreamlike causality to it that feels intuitive and relaxing.

Each level is a surreal island made of everyday objects representing events or aspects of the friends’ lives together. One is scattered with oversized electronics while another is a landfill of cardboard boxes, a U-Haul truck of exaggerated size looming in the background. All of this is rendered in soft colors with a painterly look, which earned it a nomination for the Best Art award.

Brazilian indie developer 6 Side Studios has yet another take on the puzzle genre with Hexarmonic. It’s an abstract, geometric game that’s based on timing and colors. On a hex-tile grid, you must find the correct way to link a light to a node with a corresponding color. The node flashes rhythmically, a kind of Morse code puzzle that you must solve by finding a path for the light that traverses the correct number of tiles. It’s simple and addictive, and it’s up in two categories: Best Sound and Best Brazilian Game.

Above: Hexarmonic is a puzzler where timing matters.

It highlighted student projects, like Driving Force Games’ first person shooter Impulsion, and social impact games like Unbound Creations’ Headliner, which puts you in charge of approving and rejecting newspaper articles and forcing you to contend with the consequences of how you run your media empire. And it showed off virtual reality games like OKAM Studio’s nautical Ship Ahoy! and Funomena’s colorful Luna.

Most of the games on display are finalists in BIG’s award ceremony — which is Thursday evening — which the festival selected out of the 456 submissions it received from 53 countries. This diversity showed in the demos, which had a little bit of everything.