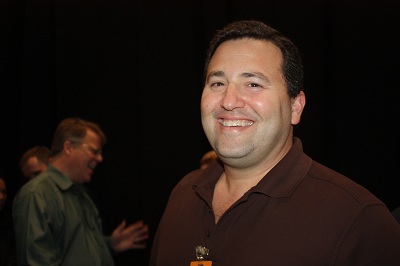 Mark Rein, vice president of Epic Games, has seen lots of game machines. But he says that the iPad 2, unveiled by Apple today, is really a cool portable game console.

That’s a good thing for Apple, since playing games is the top activity on the iPad and the new version will help Apple further invade the turf of game hardware makers such as Nintendo. That, in turn, will generate a lot more revenues for Apple and game creators such as Epic, the maker of high-end graphics technology and games such as Gears of War 3 and Bulletstorm. On the iPad, Epic Games created the runaway hit Infinity Blade, which has beautiful 3D graphics.

Apple has nearly 60,000 games on the iPhone, and many of the 65,000 apps on the iPad are games. With nine-times better graphics, Rein says game makers will be able to create scenes with faster action, more detail, and better shadows and lighting.

Rein said the nine-times better graphics in the A5 chip — the dual core processor that serves as the brains of the iPad 2 — will be great for games. The screen resolution is the same as the original iPad, but the device now has an HDMI output port, which lets you play iPad 2 content on a bigger screen at 1080p resolution. With a dual core chip, game makers can also make improvements such as better sound.

Check out Rein’s reaction to the iPad 2 in this video.