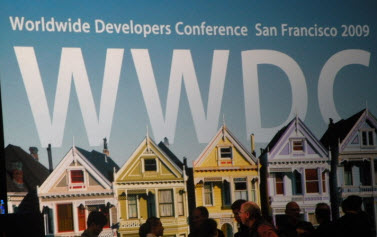 The keynote address at Apple’s Worldwide Developer Conference contained several good nuggets for game developers. The biggest deal is that Apple’s just-announced iPhone 3GS model will be much better at displaying 3-D graphics and supporting networked multiplayer games than current iPhones are.

Apple executive Phil Schiller didn’t specifically say the new iPhone was built for better games. But games account for more than 20 percent of the 50,000 apps on the AppStore. So anything Apple does to speed up performance of the phone will speed up the performance of games.

And speed up it does. As Schiller noted, SimCity will load 2.4 times faster than before. And the data network speed of 7.2 megabits a second will be much faster than the existing 3G network. If you couple that with other features of the iPhone 3.0 software debuting on June 17, you get multiple benefits, including faster download speed for apps.

With iPhone 3.0 software, you can now buy apps directly from inside an app. For a game like Ngmoco’s Star Defense, that means you can buy a new galaxy of game material from inside the game, which helps extend the life of the game in terms of hours played.

Ngmoco got a lot of airtime at the keynote speech, as did Gameloft’s Asphalt 5, a 3-D racing game that had beautiful graphics for an iPhone game. You can customize a car in that game and then take it out on any track that you want. Michel Guillemot, chief executive of Gameloft, said in an interview afterward that you will be able to download new cars and new tracks for the game from directly inside the application.

“You are going to see tens of thousands of applications that use these kinds of features, like the ability” to use iTunes music inside an iPhone game, Guillemot said. “What I have seen today means that the iPhone revolution is going to continue.”

With the new network speeds, you should be able to play multiplayer networked games much more easily, Guillemot said. You can do that today with a Wi-Fi connection, but it will be much easier with the better cell phone data network speed. Guillemot said he expects to launch two or three iPhone games per month.

Guillemot said his company had been preparing to take advantage of iPhone 3.0 software, but he didn’t know about the “good surprises” of the faster iPhone, better network speed, and other iPhone 3GS features. There are also better parental controls that can stop kids from playing inappropriate games, such as mature-rated content. And you can notify people of your progress in games with a feature dubbed “push notifications.” 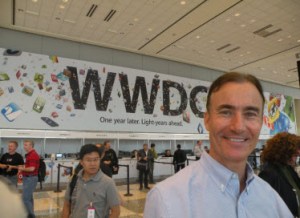 Some developers are going to take their time before exploiting all of what Apple showed today. Trip Hawkins (left), chief executive of mobile games maker Digital Chocolate, said his company will debut a series of games related to its DNA virtual goods system in October. The company has about 15 games available now, but it will launch more in the fourth quarter that take advantage of the iPhone 3GS and iPhone 3.0 software capabilities.