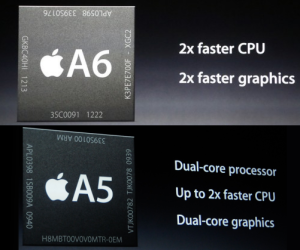 This article has been updated, please click here to read further about the iPod Touch. Read here for more info on the A6 in the iPhone 5.

Anyone curious about both the iPhone 5 and iPod Touch may have genuine concern for the gaming prowess of both devices. Especially since Apple revealed that the two devices ship with entirely different chipsets.

The iPhone 5 uses the newer A6 processor that Apple only just announced today. The new iPod Touch, however, has the older A5X system-on-a-chip (SoC), the same chip that the iPad uses.

So what’s the difference between the two, and will it have any impact on games?

Let’s start with the A5X, since it’s been in use for six months. The A5X is an iteration on the original A5, which was essentially a dual-core version with an enhanced graphics processing unit (GPU). That GPU, interestingly, is almost identical to the one inside the Playstation Vita, as we noted back in our review of Sony’s handheld. The A5X is a 1GHz dual-core ARM Cortex-A9 SoC, which has a quad-core PowerVR SGX543MP4 GPU. In the iPad, it’s as large as a 45nm processor, but as the chips in the iPhone and the iPod Touch are scaled down to fit their size, let’s assume the same applies here.

So while the new iPod Touch has a lower-resolution display (1,163-by-640 versus the iPad’s 2,048-by-1,536), it also likely has a lower clock speed, as all iPhone and iPods have compared to the larger iPad, at 800MHz. It is also a dual-core GPU instead of quad-core, which is to help keep battery life under control on the much smaller device (the iPad has an 11,666 mAh battery; the iPhone 4S has a 1,432 mAh battery). The additional two cores also aren’t required because of the significantly smaller display resolution. Gaming performance, therefore, should be similar to that of the iPad, assuming Apple increases the available RAM of the iPod Touch. Apple is notorious for not revealing technical specifications, specifically RAM. We’ll know more specifics after the new iPod Touch launches in October.

The iPhone 5 uses an A6 processor, which analysts expect to run a newer ARM Cortex-A15 processor. So far no consumer products are available with this new processor, though Samsung, Texas Instruments, and Nvidia are all preparing new chips with the new architecture. Apple’s iPhone 5 will be the first product to come to market with the Cortex-A15. 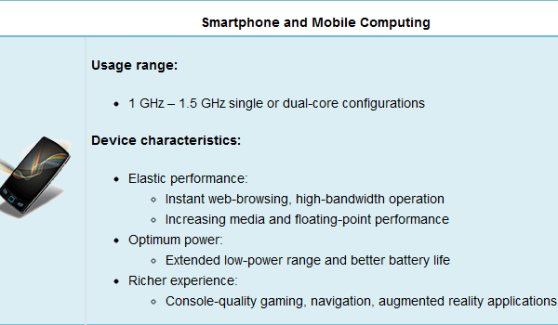 ARM reported to ITProPortal back in early 2011 that the Cortex-A15 “will be at least 40 percent faster than the A9 when it comes to raw performance, all things equal; same number of cores, same speed.” According to ARM’s website, “It is expected that mobile configurations of the Cortex-A15 MPCore processor will deliver over five times the performance of today’s advanced smartphones.” For smartphones like the iPhone 5, it can have a range from 1GHz to 1.5GHz. Apple is unlikely to release the next version of the iPhone with a single-core processor, especially after last year’s A5 was a dual-core CPU, so it’s safe to assume that the new A6 will also be a dual-core chip.

What this means is that for everyday activities like browsing the web, loading applications, and general tasks, the A6 is better than the A5X thanks to a more efficient, newer architecture. But what about gaming performance? It probably won’t be as good. The reasoning is simple: the iPad has significantly worse battery life than the iPad 2 because of the A5X, which is required to power the much denser display. The A5X solves the problem of speed by brute force, not by ingenuity or better design. That’s why the iPad can play games so well.

Alternatively, the A6, which we won’t know about the GPU inside until after the phone releases, uses a newer architecture that’s more efficient and offers a significant boost to overall performance. Apps like the new 3D maps run better, and on less power, on the iPhone 5 than on the new iPod Touch, but because battery life is far more important on a phone than a media player, more processing muscle isn’t better. It is for the iPod Touch.

In a strange twist, this also means that the iPod Touch, which again shares many of the same internal components as the PS Vita, is nearly identical in power to the portable game console. The only major difference between the two is the dual-core versus quad-core GPU, where the Vita is more powerful. 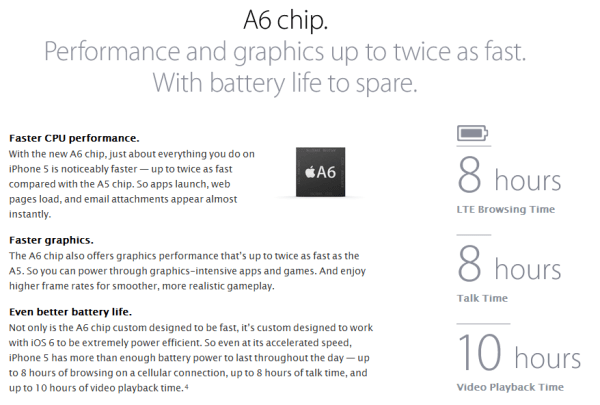 The iPhone 5 should still perform well, though it’s safe to bet that because the iPhone is adding in so many other power-intensive features like an LTE chip and a more powerful camera, Apple is more focused on making sure it can last the whole day than making game performance the top priority. But the iPod Touch doesn’t have those limitations; it will definitely be the more powerful gaming device. The price for increased performance, however, is going to be in battery life…and owning a secondary device to your smartphone.

And if you think that this is all speculation, consider this: Apple made no mention of the power increase of the A6 over the A5, yet it spent plenty of time stating that the A5X is far more powerful than past processors. Apple never downplays features of their products. The company only makes features stand out. And they didn’t do that with the A6.