TOKYO – The Japanese take their fantasies quite seriously. Video game giant Square Enix launched its Final Fantasy XV role-playing game with a lot of fanfare on the company’s home turf in Tokyo today. The launch event happens in parallel with a global launch of the game on the PlayStation 4 and Xbox One game consoles.

Final Fantasy is something like a Hollywood blockbuster in Japan. The series has sold more than 115 million copies worldwide, and this is the first major new version since Final Fantasy XIV in 2010. Yosuke Matsuda, chief executive of Square Enix, hosted the event and said it was a new flagship title that took a huge amount of effort and investment across a decade of development. 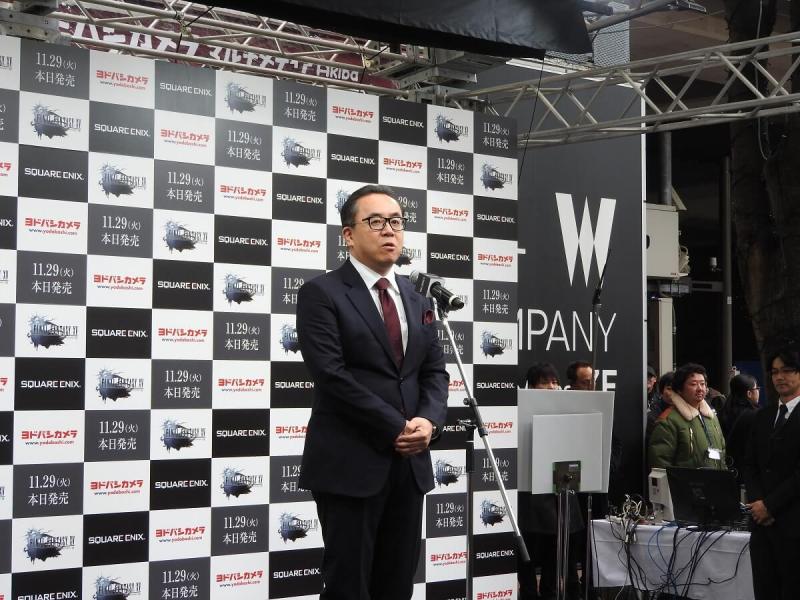 Above: Yosuke Matsuda, CEO of Square Enix, at the Final Fantasy XV launch.

Final Fantasy XV is part of a series that is home-grown Japanese content, and its creators are revered in Japan like Hollywood directors are in the United States. The development on the title originally began in 2006, and the development team switched directors in midstream to Hajime Tabata. Tabata was on the scene at the event and spoke at length about the long development process.

I asked him why he put cars into the game, and he replied, via translator, “We wanted to put the real world into Final Fantasy” to make the game more accessible to fans. By doing that, it makes the game seem more real and approachable. That’s an issue for Square Enix, as Final Fantasy games are such long games that they can intimidate novice players. Tabata said the cars were a lot more familiar to most players than taking on a big fantasy creature at the outset. 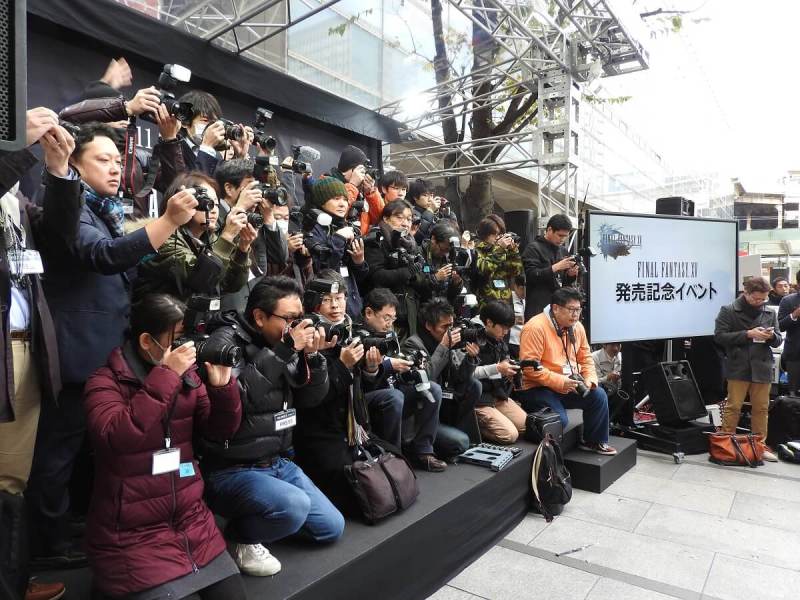 Above: The Japanese press at the Final Fantasy XV launch.

Tabata said the team tried to make the game into something that was globally appealing, not just for a Japanese audience, and the touches like the cars are part of the attempt to make this kind of entertainment attractive to all audiences.

Square Enix held the launch event at the Yodobashi Camera Store in Akihabara, Tokyo’s celebrated electronics district. Square Enix has its own cafe attached to the store, which is a block long and goes up eight stories. Fans lined up around the block in the chilly November air. The fan who was first in line got to go up on stage and brag. 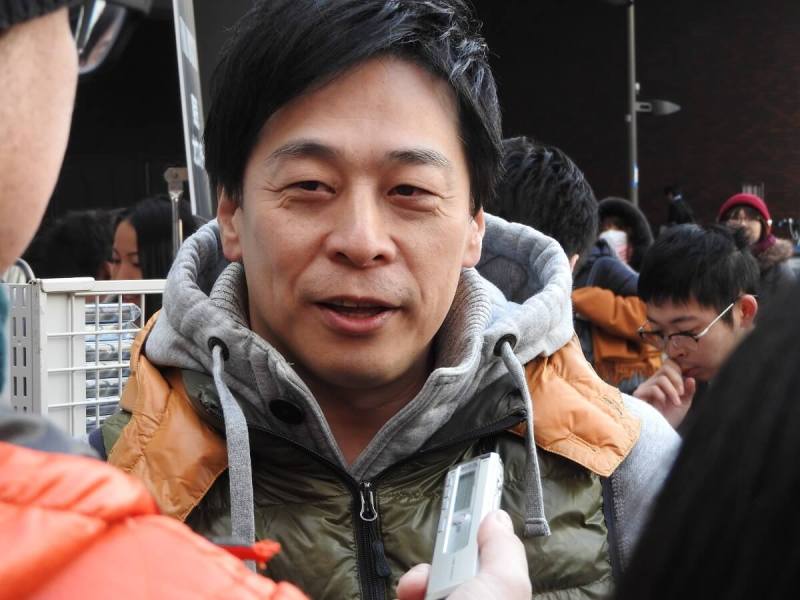 It was like a Hollywood premier, with dozens of press and broadcast cameras. The police were out in force with signs that said “move along,” and the company set up a stage next to a specially decorated Audi R8 Coupe car. The developers came out on stage along with comedians and actresses. The whole affair went on for more than an hour, and I was shivering most of the time. 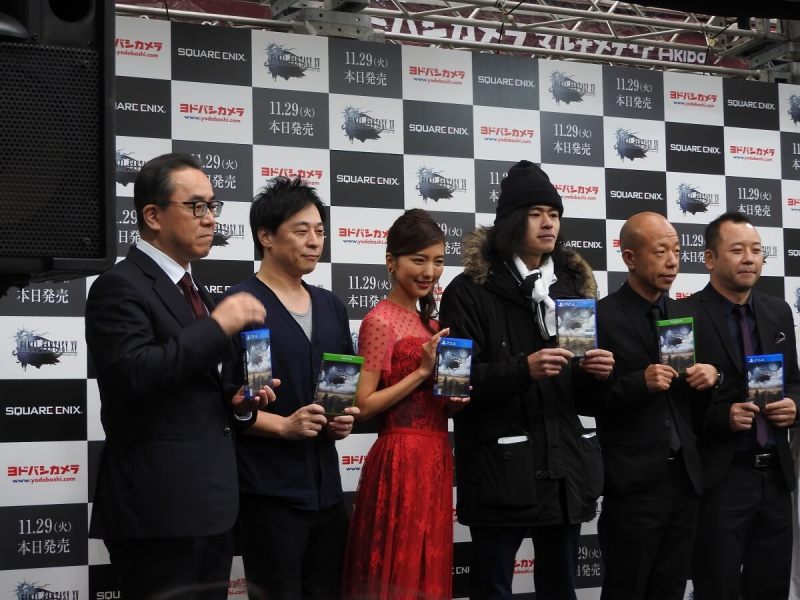 Above: The guy with the long hair was the first fan to buy Final Fantasy XV.

They did a countdown to the global launch, and fired off cannon with silver confetti. They were met with cheers, and then the fans started spending their money.

I’ll be visiting Japan all week, and I’ll be posting about the experience periodically. 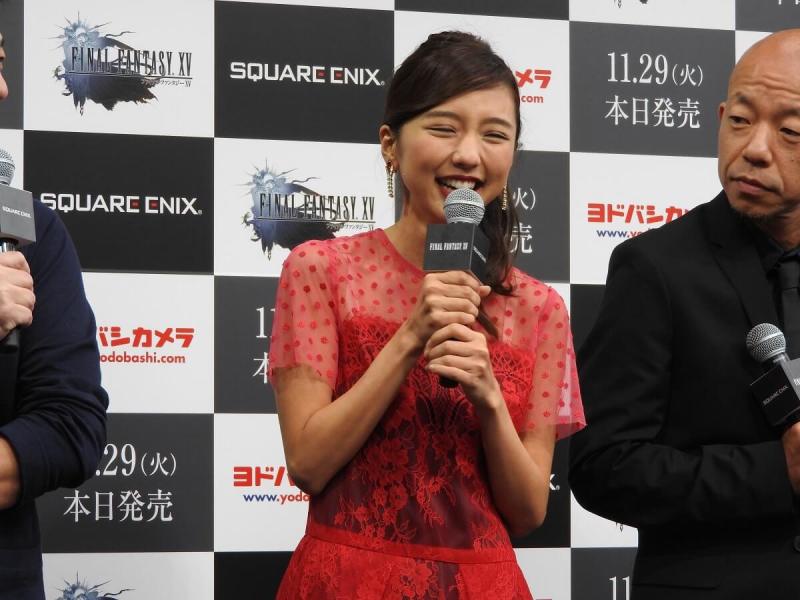 Above: A Japanese actress and comedians spoke at the Final Fantasy XV launch.