I was in the bathroom when I realized how much my TV-watching lifestyle has changed due to the Kinect.

When you think about it, altering living-room habits because of a new piece of technology is a very rare thing. It has to be good enough to overcome years or even decades of ingrained tendencies. That’s a high bar for a product to meet, and for me, Microsoft has accomplished this with version 2 of Kinect, the 3D motion-sensing and voice-recognizing camera for the Xbox One console. (I wonder what it will do for me by, say, version 5?) The Kinect can see and record quite a bit of what you’re doing — mostly to translate into onscreen actions like movement-based gameplay or menu navigation.

But it does other cool things, too. And no, this story isn’t about how I have one set up in my bathroom to watch me do my business. It’s just a great listener, even from afar.

It was March Madness, the time of year when college basketball enters its epic 68-team, single-elimination tournament. Winners get another shot at the national championship. Losers go home with nothing but months of wondering “what if?” ahead of them.

My beloved Michigan Wolverines were in a round three, “Sweet 16” matchup. I could hear the game starting on the TV, but I was in the bathroom at that time, not the living room. I got a little anxious, not wanting to miss a moment of the event, but I was indisposed. Then I remembered: I could just pause live TV with my voice.

I shouted, “Xbox pause,” out the door and into my small apartment, hoping the Kinect’s onboard microphone would pick up my semi-desperate command. Sure enough, the Kinect heard me and had my DVR pause the live broadcast. I didn’t need to hurry what I was doing. I didn’t have rush out to find a remote control that was probably buried in my couch somewhere. I really didn’t have to do anything but say two words out loud.

The Kinect is now fully integrated in my living room, and I never watch TV without it anymore. I use voice commands to pause something that I’m watching, raise and lower volume, flip through channels (I seem to use “Xbox watch Food Network” the most — comfort-food TV, so to speak), switch instantly between video games and TV and Netflix (skipping in-between menus), and so on. 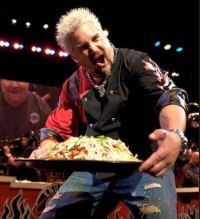 Above: And then when I see this guy, I quickly say, “Xbox watch [any other channel].”

Image Credit: Food Network
My wife and I are so used to talking to our Xbox One now that we wish everything in our lives had voice commands. Lights on. Computer off. Start shower. Mute upstairs neighbors. The Kinect has pretty much spoiled us to the point where using a normal remote control seems like such a hassle.

It’s not perfect, of course. The Kinect might not recognize something that I say perhaps one out of 10 times (by my own estimation and personal experience), and that 10 percent fail rate may be enough of a deal-breaker for most. (For some reason, the Kinect seems to perform worse when I’m trying to show it off to friends who have never witnessed this voice-meets-TV tech. It’s like the opposite of when I bring my car to the mechanic, and the problems magically disappear when he’s looking into them.) The Kinect also doesn’t know how to access my cable box’s DVR menus, options, and recordings. That’s still stuff I need to navigate the old-fashioned way: with a remote.

Plus, the Kinect’s future is very muddy now that Microsoft is selling Xbox One systems without it for $100 cheaper — a smart business decision but one that may ultimately prove fatal for the peripheral. Will developers support the camera if more and more Xbox One owners don’t have one? Probably not. You don’t really appreciate the Kinect until after you’ve gone all-in on buddying it up with your TV, so most new customers will likely opt out of getting one in favor of the $100 savings.

Still, I like the Kinect. Go ahead and make fun of me or accuse me of getting paid off by Microsoft or whatever. But the next time I start to fall asleep in front of the TV and can just say, “Xbox turn off,” with my body still prone and head glued to the pillow instead of — god forbid — having to search for the remote in my tired and powered-down state, my lazy self will be glad something’s listening.