Warning: This article contains minor story spoilers for The Last of Us.

I became consciously aware at this moment that I had been panicking. Running ’round an abandoned high school gym with fellow survivors Ellie and Bill in tow, I turned a corner without looking. In that instant, a Bloater (a massive zombified human with extensive fungal growth exuding from all parts of its body) snatched me by my head and then ripped open my face by forcibly separating my jaws.

I squirmed. But I also realized that developer Naughty Dog’s The Last of Us was using its combat system to draw certain feelings out of me. These fights were more than mere challenges — more than just closed arenas to be cleared in order to progress the narrative. The moment-to-moment action of smashing skulls was conjuring panic, anxiety, and chaos — all together underscoring the struggles of the game’s characters.

You don’t need to take my word for it; I asked The Last of Us game designer Anthon Newman about the themes in this PlayStation 3 exclusive. “The world is unforgiving and indifferent, and even just carving out the basics of existence and survival is a struggle. In a world that harsh, maintaining one’s humanity, finding redemption, and caring for those around you can only be earned with heroic struggle,” Newman said.

The Last of Us expresses that struggle most keenly through protagonist Joel, whom players will control for the majority of the game. Joel struggles to cope with the death of his daughter, Sarah. He struggles to express himself emotionally before and after the death of his partner-in-crime, Tess. He struggles to connect with a young girl, Ellie, who easily reminds him of Sarah, and he struggles physically to escort her across the American wasteland, which comes to a point when he must survive a nasty fall onto a piece of exposed rebar that pierces his abdomen. He struggles to maintain his humanity as he tortures bandits for information. 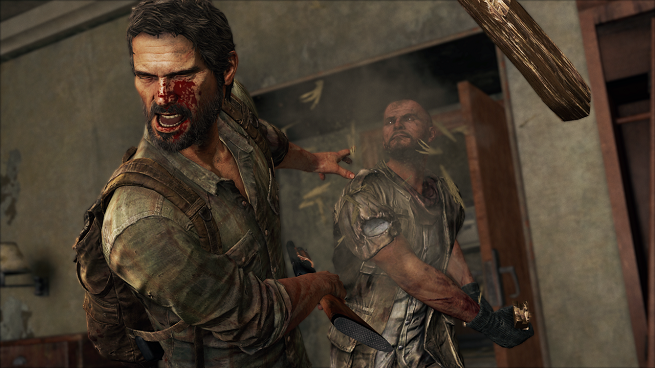 Above: Joel gets a taste of two-by-four and blood.

Newman said that The Last of Us is about “how real human beings cope under the pressures of extreme situations. How would real people act in these tense and life-threatening situations? When everything they hold dear is at stake?”

A postapocalyptic trek that borrows liberally from Cormac McCarthy’s novel The Road and Alfonso Cuarón’s film adaptation of Children of Men, The Last of Us embraces a visceral depiction of hand-to-hand combat. As Joel, you’ll beat men to death with a lead pipe — sometimes with a sharp object secured to one end. You’ll sneak up and stab a man’s neck with a shiv. You’ll pummel the life out of men with your bare hands. You’ll intimately feel the crunch of splaying open a fungal zombie’s squishy brains with the stomp of your boot as the view closes in on the carnage.

And if you can use your environment to your advantage, Joel doesn’t shy away from breaking a man’s face against a concrete wall, a metal railing, or whatever else happens to be nearby. (And I do mean men: Aside from the infected, your assailants are almost exclusively male.) I’d describe these better if I had the command of McCarthy’s prose that has a beauty to its brutality, but I feel that Naughty Dog has done the work for me and translated that depravity into The Last of Us’s combat.

When you get into a fight, the camera subtly zooms in and gives you a sort of tunnel vision, keeping the confrontation remarkably personal. “We definitely wanted things to feel personal and intimate and to emphasize the humanity of the combatants,” Newman told me. “That’s why the camera is so up close.” 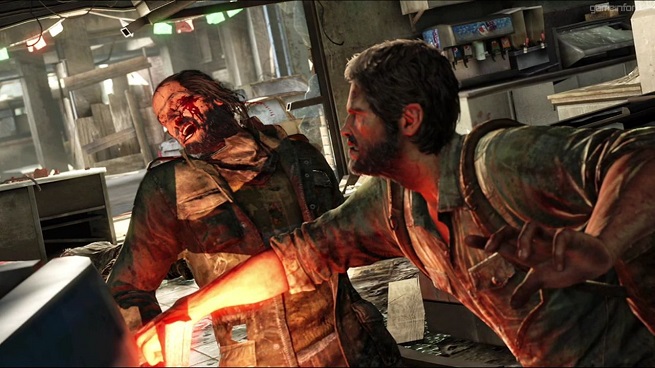 Above: Joel strikes with desperation.

This aesthetic choice feels much unlike other action-type games, where the camera typically moves outward (if it moves at all) to give the player a better view. “This helps to contrast our combat from other melee-focused games that give the player an advantaged perspective from much further away so that they can respond easily to attacks from multiple angles. We wanted it to feel like Joel is always up against the ropes and that he wins despite the odds and not because of them,” Newman said.

Think about the last time you got into a fight or a situation escalated outside of your control toward violence or even the threat of violence. Your heart raced. Your palms became sweaty. Your eyes darted back and forth rapidly but stayed fixated on your target. A shot of adrenaline coursed through your veins. Everything moved so quickly and seemed so out of focus.

The Last of Us wants you to feel the anxiety that accompanies such a confrontation. The camera sways wildly with each swing of Joel’s fists as he trades blows with his adversaries. “The impacts from [enemy] attacks are meant to feel weighty and significant: You momentarily lose control as you recover from the impact of each strike,” Newman elaborated.

You attack with the press of a single button, but in the panic of an assault, you’ll find yourself mashing that button as fast as you can, crossing your fingers and hoping you can bash this fucker’s head in before his buddy puts a bullet in your back … of course, that’s if you even notice the man pointing a gun at you. “Here again, the close camera plays an additional role in the game’s mechanics: The narrow view prevents you from seeing enemies coming from offscreen. So, when you’re surrounded by even just two enemies, the odds swing far out of your favor as the guy behind you takes advantage of being on your blindside,” Newman told me. 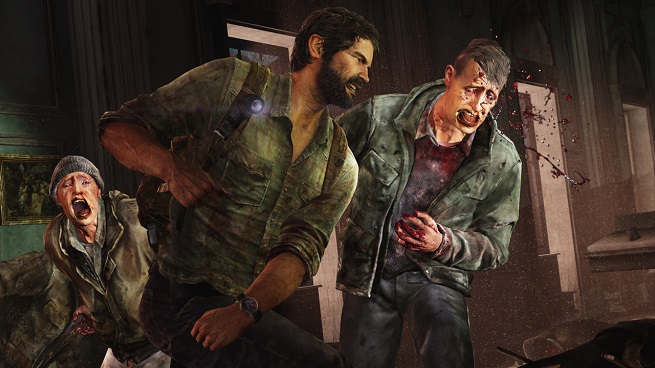 The Last of Us refuses to give players a break, too. Accessing Joel’s inventory for weapons and items is a laborious process. He takes time to kneel, remove his backpack, and rummage through. All of this happens in real time, which leaves Joel vulnerable to anyone or anything that might notice him. Healing with a medical kit takes time. Reloading a firearm takes time. An attack can interrupt these actions. All of this stands in stark contrast to video game norms, where the player is typically either entirely safe from harm (i.e., the game world pauses) or the processes are so seamless as to take no time at all. The Last of Us instead works to strip players of their power fantasies.

Weapons are neither reliable nor dependable. Ammunition for the various long-range guns and bows you’ll find is more scarce than players are accustomed to in other popular games — you won’t be hauling around hundreds of rounds; you’ll be lucky to have a full clip on you at any given time. Armaments like pipes and bats are only useful for a specific number of hits, breaking quite easily. A wooden plank, for instance, can only give four strikes before splintering. Guess how many it takes to normally kill a man?

Combat is a struggle. Every fight feels like your last, like a desperate attempt to stay alive even if only long enough for the next one. “To emphasize the themes of the world and the nature of Joel’s struggle in it, we wanted each individual enemy to feel significant. Even a single enemy is meant to be a real threat,” Newman said.

As with almost any action game, players will spend the vast majority of their time fighting. This is The Last of Us’ principal language — the primary way in which players communicate with the game world. With so much human struggle permeating every aspect of the story, it’s especially clever of Naughty Dog to work that feeling into the game’s moment-to-moment combat. 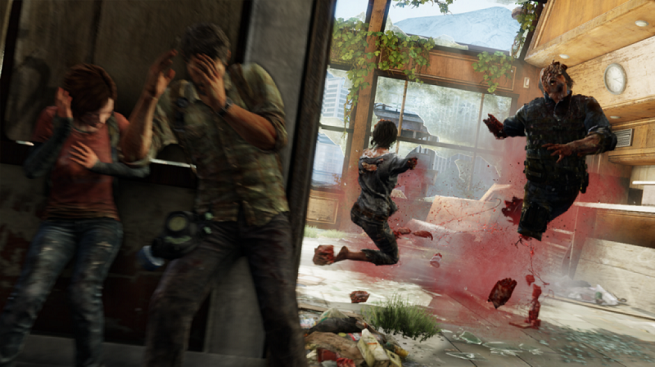 Above: Ellie and Joel take cover as a nail mine tears apart a couple of fungal zombies.

Expressing a game’s themes through gameplay is “a cornerstone of Naughty Dog’s design philosophy,” Newman explained. “In the broadest sense, the themes, tone, genre, and story of the game are what drive our mechanics, aesthetic design, and our technical advances.”

Newman continued, “So, we tried to develop mechanics that emphasize that these are real humans with real emotions that you’re dealing with.” Drawing inspiration from Joel and Ethan Coen’s film adaptation of No Country for Old Men (based on the McCarthy novel), Newman tells me, “That’s why stealth kills are a drawn out struggle — to emphasize that this is a real person who is fighting to stay alive.”

“It’s our view that games are at their strongest when every element, from the music to the graphics to the mechanics, reinforces each other and plays into an overall message — into a cohesive whole,” Newman said. “Hopefully we pulled that off with The Last of Us.”