The scene juxtaposed Ellie having fun with another young woman at a dance in a church. But just as Ellie and the woman share an intimate moment, the scene shifts to horrific violence as Ellie hunts and then becomes the hunted.

One of the points of the scene is to show how the menace of other humans can be just as dangerous as the zombies who infest the landscape. Ellie uses stealth to pick off some of the enemy humans one at a time. And we quickly learn how good at combat Ellie has become. I loved this trailer and the feelings it evoked. And it adds even more pressure for Naughty Dog to come up with something bigger and better in The Last of Us Part II.

I interviewed game directors Anthony Newman and Kurt Margenau with a small group of journalists at the 2018 Electronic Entertainment Expo (E3) in Los Angeles. They helped me see better the technology, and they provided context for the storyline. Here’s an edited transcript of our interview. 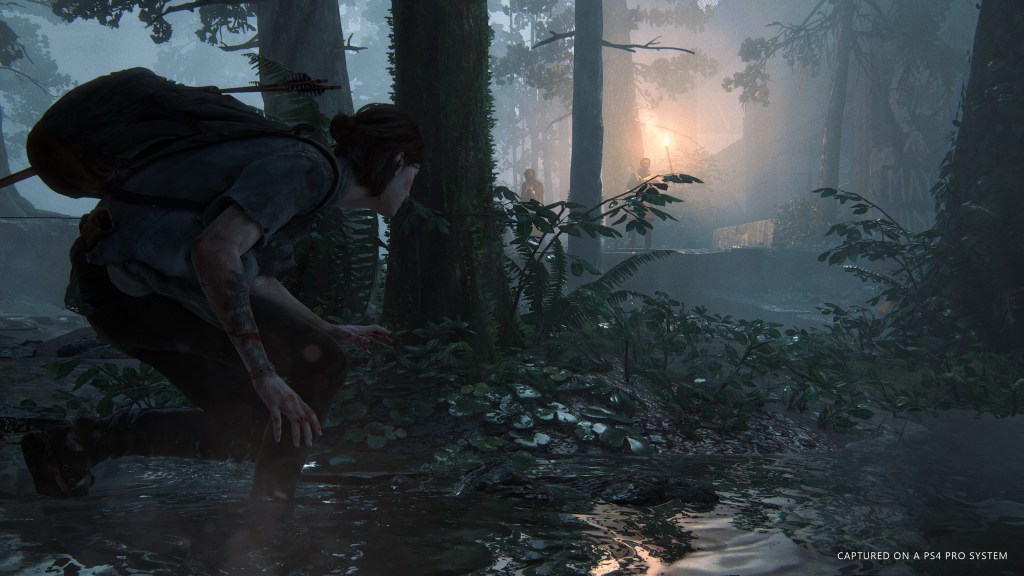 GamesBeat: How involved were you in the previous game?

Anthony Newman: On The Last of Us part one, I was the melee combat designer.

Kurt Margenau: I was an additional designer. My experience is more on Uncharted. I was game director on Lost Legacy.

GamesBeat: How would you summarize what you wanted to communicate through this little sequence we saw?

Margenau: I’d say it reflects the extremes of human emotion that happen, with tender moments and violent ones. And obviously we wanted to show off all our new combat mechanics, show how good the graphics are.

GamesBeat: There’s a lot of Uncharted DNA that I could see, dodging and the like. Can you talk about that, what you took from other projects?

Margenau: It’s not like we took things from Uncharted and put them in The Last of Us. We obviously look at every franchise and see how we can evolve it. We learn a lot from every game we work on, how we evolve making really good-looking, snappy-feeling animations. For The Last of Us, expanding what Ellie can do going on her own. Taking the stealth from the first game, taking the vegetation, that freedom of being able to make a lot of use of the vegetation that we had a bit of in Uncharted, but having even more freedom now with this analog stealth.

The thickness of the vegetation and what state you’re in determines how much the enemy can see you. It’s not a binary system where you’re completely invisible or completely exposed. You can intuit how safe you’re going to be from looking at the environment.

GamesBeat: I saw that Ellie was crafting stuff on the fly. What’s she going to be able to make?

Margenau: We wanted to encourage crafting. We wanted people to be able to craft in the moment more. We expanded what you can craft, but it’s really easy to just add a million things, and we didn’t want to throw in the kitchen sink for crafting. We wanted to have meaningful choices. Every choice you make in the game is a trade-off. Every element and every piece of scrap—it’s a different way of combining the currency of crafting now.

Above: Ellie and a fellow survivor in The Last of Us Part II.

Newman: If you take a close look at the UI when she crafts, you can extrapolate a lot about what’s going on in the crafting system. But like Kurt said, every aspect of the game, we’re trying to really take risks and push things to another level. We want to have a lot of interesting new items, and a crafting system that provides you with things you couldn’t do before.

If you take the explosive arrow, really there was no long-range splash damage weapon in the game. There’s not a lot of rocket launchers in the Last of Us universe. The explosive arrow is a way to fill that niche. In general, we’re looking for ways to give you access to distinctly different player abilities through the crafting system that open up new dimensionality to the combat.

GamesBeat: It looks like such a fluid system. It’s very quick. Is it just a few buttons?

Margenau: The time to craft is similar The Last of Us one. We did do a lot of work in the UI, though, to make it more accessible and intuitive. When you select to craft the bomb arrow, you can go to the same button as in the first game to bring up the big menu and look at all of your options, look at all of your ingredients, but on the weapon cross itself you can select your ammo and shortcut to crafting from there. In the demo it’s done that way. You can select and change your ammo type over and craft at the same time. It’s hard to describe in words, but we’ve done a lot of testing and it’s working out well for us.

Newman: It’s always been a system that’s meant to be very immediate. We don’t pause the game or use slow motion or anything. It’s something where you’re taking a moment and a risk to try to make one of these items. It’s important that it be a very fluid system.

GamesBeat: Is there something that’s unique to Ellie that we saw here, like these moves around squeezing through things or under things?

Margenau: You could say that they’re all unique to Ellie. If you compare to The Last of Us one, where you played as Joel, all of these things are Ellie’s. They’re all built out of Ellie and how—obviously she’s not going to be beating people up. She’s not as big as Joel. She has a knife, so all of her melee is built around—you can still use weapons. Obviously we saw her pick up the machete. We have that same satisfying option to pick up stuff in the environment, use weapons that other people had. You’re still able to upgrade them. But her base melee is her knife, and she’s still very deadly with that. 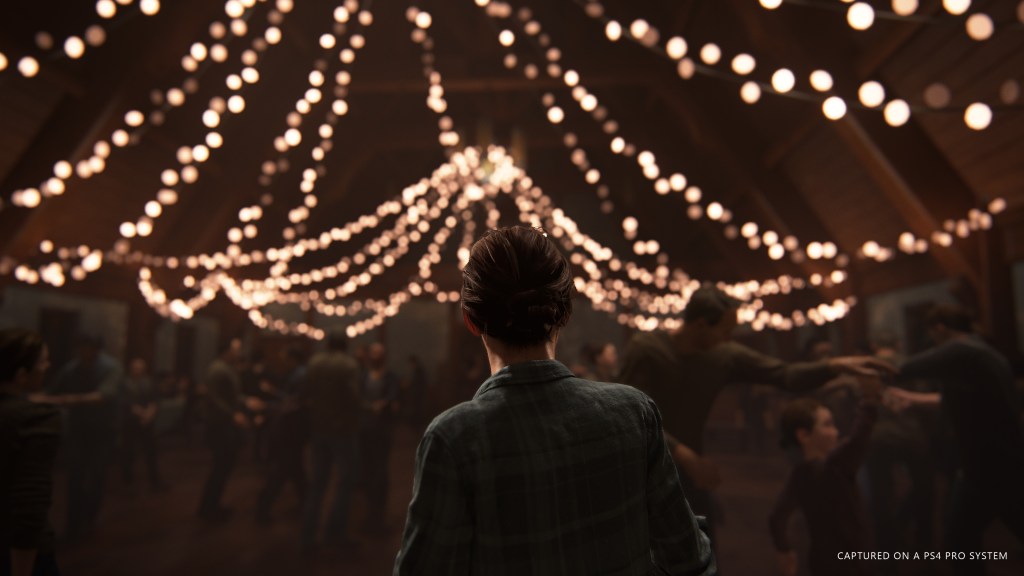 Above: Ellie in The Last of Us Part II.

GamesBeat: The first thing I noticed when I was watching the live gameplay was the lack of the Joel sonar. Is there going to be something new like that? Or, because this new analog system is here, is that stripped away?

Margenau: We’re balancing that. What information you give to the player in a stealth game is always a big deal. Listen mode, from The Last of Us one, we still do have that. We’re trying to refine it, tune it, make it feel more grounded and more realistic.

Newman: There are some pretty exciting evolutions to listen mode that we’ve been able to get in. It’s just that this demo is already so stacked with new mechanics.

Margenau: The HUD on the screen wasn’t there before. You have that little marker that grows, the threat indicator.

GamesBeat: Pulling the arrow out of the dead body, is that something new?

Margenau: We’re always evolving different situations you can find pickups in. This moment had happened and it was there, so—

Margenau: We’re doing everything in the world. If she picks up an object, she really picks it up in her hand and puts it in her pack. If you pick up an arrow, she puts it in her kit. There’s not going to be a handwave and a teleport of a thing. We’re trying to make it so every object physically exists and you carry it with you.

GamesBeat: One of the reactions I was seeing to Ellie’s new girlfriend—everyone was immediately thinking back to The Last of Us one, Joel and his daughter. I guess what I’m asking is, should players get too attached to any new characters here?

Margenau: I think in this universe you can’t really get too attached to anybody. Nobody is safe.

Newman: In a similar way, the tenderness they have, the love that they share, that’s one of the stakes that’s in this world. It’s not just your life that’s at stake, but the really important relationships that are going to drive these characters to do what they do. 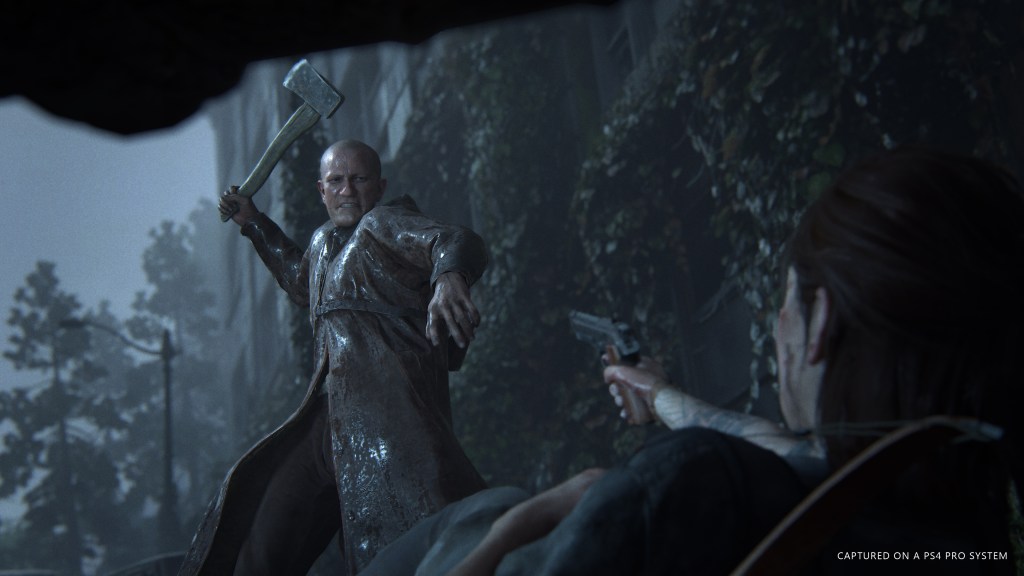 Above: Ellie fights to the death in The Last of Us Part II.

GamesBeat: You talked earlier about how some of the reactions were choreographed AI. The enemy was reacting toward you in a way that’s kind of arranged, but also–

Newman: Yeah, we’ve been asked about how scripted this demo is. Basically, The Last of Us is a game about emergent mechanics. It’s about AI that behaves intelligently and reacts to what the player is doing. That can be a very nuanced and emergent system. It’s what makes the game great. For a demo, where we want to show off a very specific set of things in a specific way, we have to corral the AI and corral these complicated systems and force them to operate in a deterministic way so we can have a clean demo every time we show it to people.

GamesBeat: The girl she kisses, is she meant to do something like—does she pull an emotion out of Ellie that she would never have with Joel? She seems so happy in that context.

Margenau: The romance is an emotion that she’d never feel with Joel, at least.

GamesBeat: She seems flat in conjunction with Joel because Joel is so flat. Here you see her actually being far more emotional.

Margenau: Yeah. In this game we’ll get to see the relationship between her and Joel and what, in those five years, she’s picked up from him, as well as what she’s rejected from him. It’ll be interesting to see.