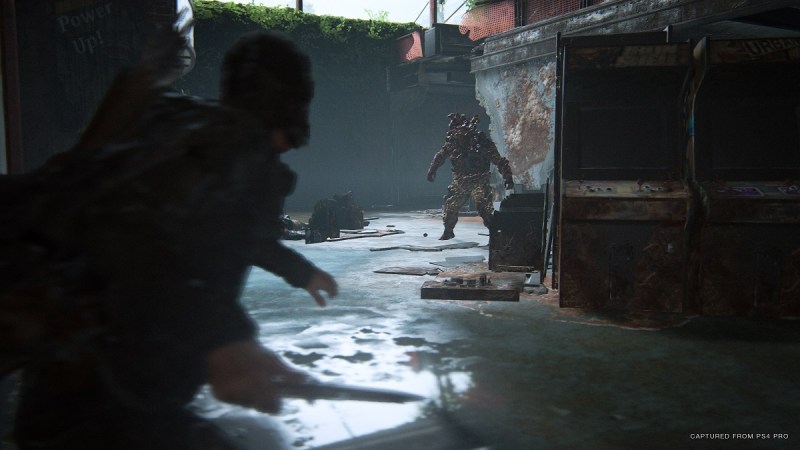 Above: This shambler’s coming for you.

The enemies are particularly tough to beat when they are hunting you in packs. You can take one down with a stealth move, but another might see you. They’re also able to track you in multi-story buildings. This was evident in a skyscraper, a ruined building, and a parking garage. The AI enemies kept changing levels, and so it was harder for me to figure out how to ambush them. This means that you have to think in three dimensions, not two, or you’ll suffer Khan’s fate in Star Trek: The Wrath of Khan, as Spock and Kirk outwitted him.

Some scenes of post-traumatic stress will surely freak anyone out. It’s another recognition of mental illness in a video game. Naughty Dog splashes some cold water on the idea that heroes are invincible. You can’t mow down people and zombies without being affected by it. It takes its toll and comes back to haunt you, and the storytellers told this part in a realistic way. 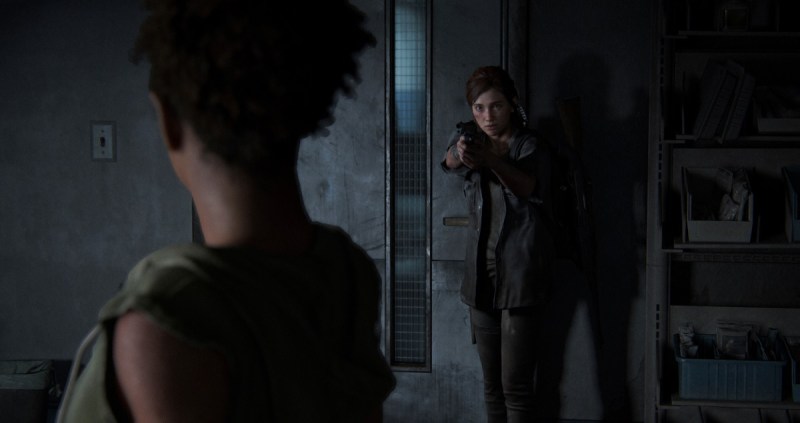 Above: Ellie corners Nora at a hospital.

One of the things that the storytellers bring back throughout Part II is an acoustic guitar. You can make music from it, strumming the guitar using a game controller (through joystick maneuvering and swiping the touchpad) as part of the gameplay. You’ll find a guitar here and there throughout the game, and you can always pause and play it.

But it’s also a mood-setting device, as somber music will take over and remind you of things that happened during, if you can believe it, happier times in the past.

In the original, one of the most beautiful moments is when Ellie and Joel came upon a herd of giraffes walking through a city. They get to experience the pure joy of seeing something totally unexpected and misplaced in the ruins of humanity. It interrupts the relentless sadness and moody tone. The sequel has beautiful moments as well, provided by the natural world that has survived the pandemic.

Sometimes it takes the form of notes found near skeletons, where people who died during the pandemic talk about their final moments and their regrets. Another time, you see a seal swim past an aquarium window or a dog play fetch with a stuffed animal. These are reminders that some kind of humanity or natural beauty persists in a world gone awry.

The Last of Us Part II has a story that is as compelling as they come. But Naughty Dog finds ways to string it out. My run was 40 hours, and not just because I was a bit of a completionist. My daughter finished it in about 35 hours, partly because she’s a better shot than I am. 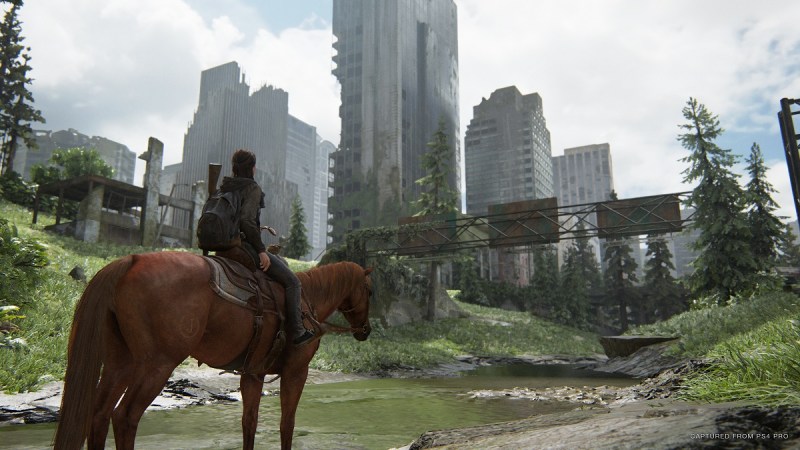 Above: OK, let’s travel through the city again.

Flashbacks and character pivots and backtracking: Naughty Dog uses every trick to stretch the story out. I would’ve been happier with a longer story, rather than one that left me hanging for so long. This is excruciating because the cliffhanger is a life-or-death moment, and it brings to mind my old suspicion that game developers are gods and they love to torture us players.

And when these long detours are done, you ask yourself whether they’re necessary. I certainly enjoyed spending an extra number of hours in the world of The Last of Us Part II. But I don’t know if every player will appreciate the plot detours.

Yep, just like in Days Gone, you encounter a new faction here, and it’s a religious cult. It’s kind of logical that cults form after the apocalypse has destroyed everything of the scientific and corporate worlds. But it is still a bit of a cliché. What I admire about The Last of Us is how it’s pretty free of the clichés of zombie games, even though it’s a zombie game with a great story. When I saw things like the religious cult and the presence of enemies who emitted fart clouds (like in Left 4 Dead), I felt it diminished the uniqueness of Naughty Dog’s game. 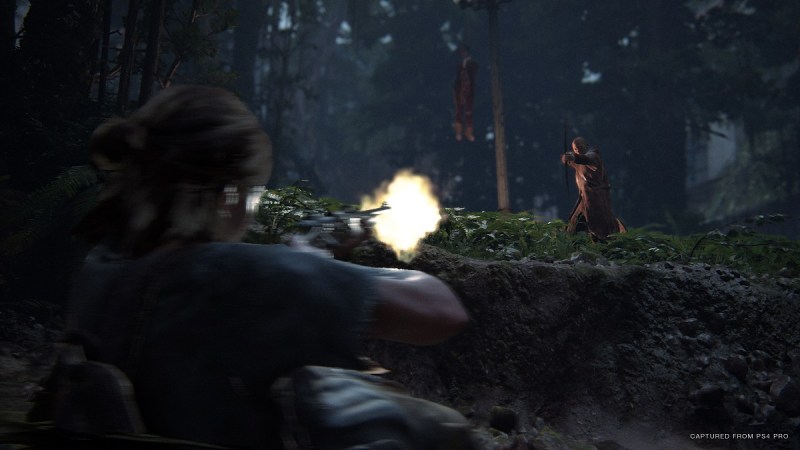 Naughty Dog created a lot of cool animated scenes, like squeezing between cracks in walls. You do that by going up to a crack and pressing X. Then an animation takes over (a quick cinematic that interrupts your gameplay), and your body squeezes between the cracks. But too often, you’ll hit the button at the wrong time.

Sometimes, that means death. This happens over and over because of the latency between when you push a button to start a cool move and when it actually happens. It’s a matter of timing that you have to master, but it is one of the most frustrating things about Part II, and it detracts from the realism. You’ll curse every time this happens, saying, “But I hit the button first!”

I was going to count how many times I opened a drawer in a home and then found nothing there. If you as a game designer or artist are going to the trouble of making a drawer interactive, then you should put something in it. Quite often, I would be motivated to open a drawer before going to take care of a life-threatening issue, like an Infected walking around upstairs. It’s a long game, made longer by these dead ends.

Load times are also quite long, as are the cinematics themselves. In the beginning, it takes a long time before you take control of your character and start making things happen.

In one mission in Seattle, you have to go find some gas. The first major location that you go to with Dina is a place of worship. It’s a beautiful place, and you get to know Dina and her background a bit more. But you don’t find any gas there. You don’t find any Infected either. The mission is a bust. For the player who simply wants to find gas, this is frustrating. For the player who wants to get to know Dina, this is actually an interesting part of the story. It feels like Naughty Dog is testing the patience of players. 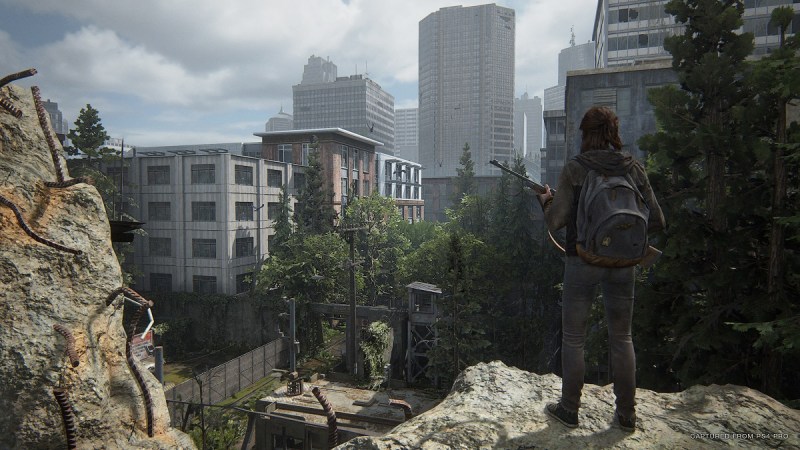 Above: Ellie traverses Seattle in The Last of Us Part II

You’re always starving for ammo. That’s a good concept for a survival story. But it can be frustrating when you take out a guard and take his gun. Then you find he has just one bullet or no ammo. Why is he serving as a guard if he doesn’t have any ammo?

I can forgive Naughty Dog for the slow load times, as this is an artifact of the PS4’s age. New hardware will solve some of these problems. This makes me want to play all over again on the PlayStation 5, where processing power and fast SSD storage should get rid of a lot of the latency and the loading times. 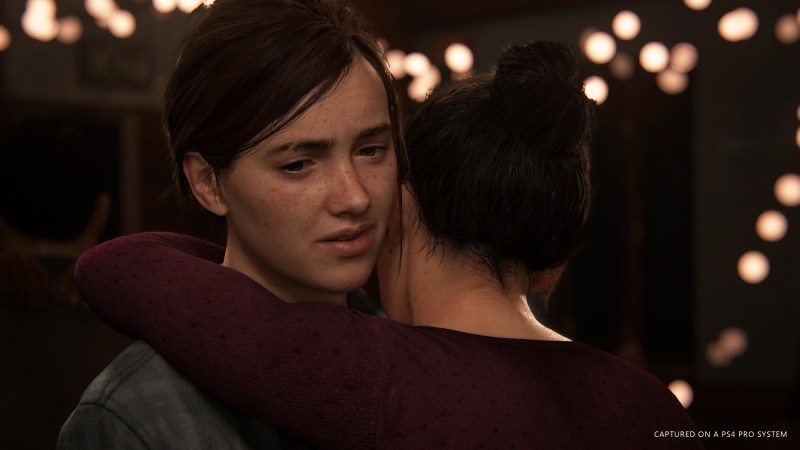 Above: A kiss at a dance in The Last of Us Part II

The improvements that Naughty Dog made in gameplay and graphics showed that they were able to completely overhaul a system that wasn’t all that bad to begin with, and the result was gameplay that kept me entertained even though it was the longest game that Naughty Dog had ever made. As I said, the action in this game is intense, grueling, and raw.

I am very mixed about the story of the game. For someone who fell in love with the characters of The Last of Us, the sequel is a heart-wrenching tale. You might see split reactions among fans like we saw with the ending of HBO’s Game of Thrones. The new characters who come into the story have a symmetry to them. Some are mirror images of each other, and it shows you the different directions that you can take with hatred. I hated parts of the story, but they all made sense in the end.

The Last of Us Part II launches on June 19 on the PlayStation 4. Sony sent GamesBeat a PS4 code for the purposes of this review.