The Last Tinker: City of Colors by Mimimi Productions is the Bob Ross of video games: It’s got sunshine, harmony, and happy trees. If you want a break from gritty games, this easygoing adventure launching May 12 for PC, Mac, and Linux takes a positive approach, using colors to convey more meaningful emotions than just blood red.

The Last Tinker: City of Colors is heartfelt in its themes of artistic expression and tolerance, making it a gentle journey where even the combat is kind. It also tells a great story while alternating between platforming, puzzles, and light action. It’s a great pick for parents who want inoffensive and colorful entertainment to share with their kids, but it’s less suited for those looking for a challenge or needing to vent their aggression.

You play as Koru, a monkey-faced outcast who doesn’t fit in to any of the world’s three main color-coded districts. The red, green, and blue citizens of the City of Colors prefer to live among their own kind in segregated neighborhoods and don’t mix well with others due to their different emotional states. 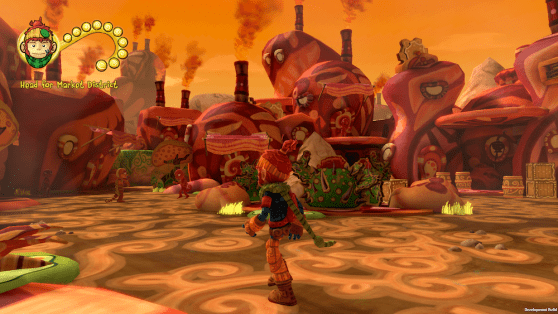 Above: In the Red district, the local population is hostile and aggressive.

When a fog called the Bleakness descends on the City, frees citizens, and drains all of the color out of the world, Koru discovers that he alone is able to contain the threat and unite the population. It’s a storybook beginning to a unique narrative with a bit of added social subtext.

Koru must travel to find the spirits of Red, Green, and Blue, the three colors that form the basis for this world. Each spirit will contribute a special power, but to get to them, you have to navigate platforms, solve puzzles, and learn to fight back against monsters made of Bleakness.

Koru is well-equipped for the challenges in front of him. By holding down the spacebar (or a button, if you’re using a controller), you can make him run and jump automatically between ledges like the hero of a nonviolent Assassin’s Creed, if such a thing were to exist. You’ll frequently navigate over outcroppings and octopus tentacles with ease. As a result, the platforming is very simple and direct, perfect for kids who want the feeling of scrambling over the virtual scenery without the frustration of falling.

Koru also learns how to fight early on and gains special abilities corresponding to the spirits’ different colors. Red is your basic attack, but you can also send enemies fleeing with cowardly green or stun them with sadness from a blue punch.

You’ll encounter enemies just a few at a time in between platforming and puzzle segments, and most of the combat feels very basic. Later in the game, when you need to switch between colors to fight off larger foes, you’ll have more opportunities to combine attacks strategically.

With the platforming and combat so easily accessible, it’s left to the puzzles to pick up the slack. The environmental puzzles in The Last Tinker are well-designed and often require a walking mushroom character whom you can lead around certain stages. This character can blow up pathways when he’s small and stomp on buttons, rampage through barriers, and banish the bleakness when he’s big. 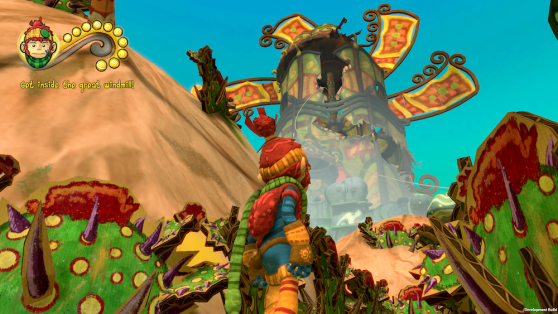 Above: To restore the confidence of the Green Spirit, you have to climb with him to the top of this soaring windmill.

Some of the puzzles might be frustrating to younger players, but with a little help from an experienced gamer parent, they’re not too difficult. This makes The Last Tinker an effective collaborative game for families of different ages and gaming backgrounds.

One of the most compelling reasons to play this game with your family is not the puzzle solving but rather the gorgeous visuals. Certain elements in The Last Tinker’s world look like handcrafted props, such as cardboard dialogue boxes and surfaces where you can spot individual brush strokes.

Meanwhile, the story is equally inspiring. As you play, you’ll watch timid green rabbits and moody blue bears overcome their frustrations and anxieties with renewed confidence. It’s a positive theme that runs throughout the narrative, and it feels kid-appropriate without becoming too preachy or saccharine.

Although the gameplay in The Last Tinker often changes with each new level, it’s never very difficult except for a few standout scenes. The rail-riding segments are a rush as long as you remember to jump out of the way of walls or spikes, and they seem disproportionately challenging compared to the rest of the game. 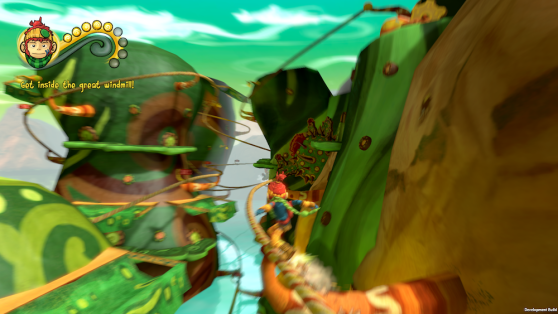 Health is always plentiful during fights, and you’re never far from a checkpoint if you do take enough damage. Combat isn’t a major focus of this story-heavy game, so fights can feel like a calculated impediment.

In addition to fighting, jumping, and puzzle-solving, you’ll occasionally engage in one-off activities like solving a crime or locating soldiers before a battle. These usually require you to run up to checkpoints and hit a button, with minor environmental puzzles instead of new gameplay mechanics.

Certain gameplay offshoots, like a firing a cannon at a sea monster or stealthily infiltrating a temple, are not very successful due to their lack of complexity. Fortunately, you’ll only have to do these once, and then it’s back to the main game.

To unlock character art, you can also search each level for bonus paintbrushes. This is a nice extra, but on your first play-through it feels like an unnecessary distraction.

The Last Tinker: City of Colors is best shared with friends or family who enjoy a good story and pretty artwork. It’s not difficult, it’s not aggressive, and it’s not online, so it definitely belongs in the gentler category of family games like the Lego series.

If you’re tired of licensed games and want to play something new, The Last Tinker: City of Colors is an original creation that qualifies as a modest work of art.

The Last Tinker: City of Colors will be released for PC, Mac, and Linux on May 12, 2014. The publisher provided GamesBeat with a PC copy of the game for the purpose of this review.