Imagine if Hollywood decided to make Lawrence of Arabia 2. I think we’d all agree that would be a pretty terrible idea. Why bother making a sequel to an old classic? You can’t possibly match the quality of the original, and at worst you can tarnish the legacy of the first one.

Still, Nintendo has brazenly decided to make a proper follow-up to one of its most beloved games, The Legend of Zelda: A Link to the Past, originally released for the Super Nintendo back in 1991. Sure, we’ve seen plenty of other Zelda games since then, but A Link Between Worlds (out Nov. 22) for the portable 3DS system is a true sequel, taking place in the same world (the map is virtually identical) and featuring a similar aesthetic (but with polygons replacing pixels) and the same top-down perspective.

That’s cute and all, but who would really expect greatness from a nostalgia-feeding act like this? And yet I’m comfortable placing A Link Between Worlds on A Link to the Past’s high pedestal. 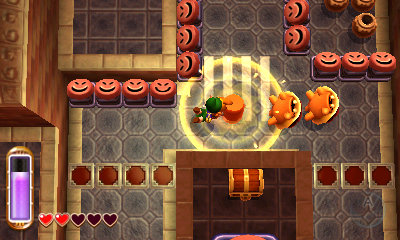 A Link Between Worlds will feel familiar to anyone to who played A Link to the Past. You travel an overworld (or two) littered with enemies, dungeons, and secrets, using your arsenal of weapons and items to beat baddies and solve puzzles. Design-wise, it’s very similar to the 3D Zelda games that started with Ocarina of Time on the Nintendo 64, and while those 3D Zeldas are great, it’s refreshing to play one with the classic top-down perspective again.

Although A Link Between Worlds uses 3D models, the art faithfully captures the spirit of A Link to the Past’s pixels. The music features few original songs, but the new compositions of classic Zelda themes sound great.

The biggest difference between A Link Between Worlds and its predecessor is Link’s new ability to turn into a painting, which he can use to travel along walls. It sounds simple, but this feature opens up a ton of new puzzle possibilities. You can slink through cracks on the wall, dodge attacks, and find paths to otherwise unreachable areas.

You face new and interesting scenarios for the ability right until the very end. The Zelda series has a long tradition of gimmicks (such as time travel in Ocarina of Time, sailing in The Wind Waker, and turning into a wolf in Twilight Princess). This is one of the most creative and entertaining. 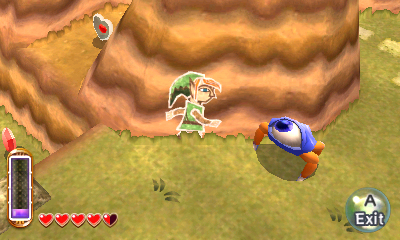 Above: That monster has an eye for great art.

While A Link Between Worlds uses essentially the same world map from A Link to the Past, the dungeons are all new, and they’re fantastic. These feature some of most interesting puzzles the series has seen yet. Many use the wall-painting mechanic, but a couple of new items also add some interesting twists, like a rod that raises columns of sand in front of you.

The bosses are also some of the best in franchise history. I obviously don’t want to give much away here, but they require just as much smarts as brawn to beat.

I also love one of its biggest breaks from series tradition. You no longer have a depleting supply of arrows, bombs, and other items. Everything, including your time spent as a painting, draws from a single magic meter that recharges over time. It’s a relief to no longer mow down grass and break pots to keep a decent stock of arrows, and the slow-charging meter adds some extra tension.

Great use of 3D

A Link Between Worlds takes awesome advantage of the 3DS’s glasses-free 3D. Since you see most of the game from a top-down perspective, you can easily identify the layers and levels of the world around you, and items like deflected arrows and pillars of fire jump off the screen and into your face. 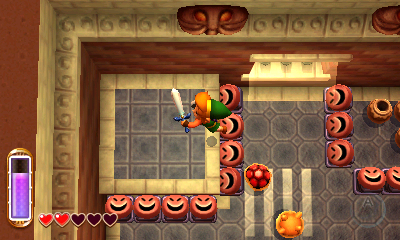 Above: He’s coming right at us!

While plenty of 3DS games use 3D as an auxiliary feature, it really enhances the entire experience for A Link Between Worlds. I’d recommend keeping it on as much as you can.

A Link Between Worlds’ biggest change to series convention is the way you get new items. Instead of finding them halfway through each dungeon, you can rent almost the entire arsenal early on from a single store. You can keep each rented item until you die, at which point you’ll have to go back to the store and spend some more rupees (you can eventually permanently buy each item for a high price, but not until you’re a good way through the story).

It’s not a terrible idea, but the positives it adds don’t outweigh the negatives. You’re almost overwhelmed the first time you see all those items available to you at once, and you lose that satisfaction of earning one in the middle of a dungeon. Also, some of the items, like the sand rod I mentioned earlier, are really only useful in and right before a single dungeon, probably because the designers worried about confronting players with a puzzle they can’t solve because they don’t have the right item rented.

The one nice thing about this system is that it helps you tackle most of the dungeons in a nonlinear order, but since it doesn’t really affect anything if you do one before the other, then would it really be that bad to have to go through them in a set order?

It was probably an experiment worth doing, and I can understand why Zelda wishes to lose some of its linearity with open-world games becoming so popular, but renting items isn’t the answer. Still, that’s a minor gripe, and I’d rather disapprove of a new idea than criticize a game for feeling old and tired.

Despite its many references and callbacks to the 1991 classic, A Link Between Worlds feels fresh. Not only does it feature some of the best dungeons and bosses in the series’ long history, but its stunning use of the system’s 3D effect should make anyone thinking about saving a few bucks by getting a Nintendo 2DS pause and reconsider.

A Link Between Worlds is one of the 3DS’s best games and a new highlight in one of Nintendo’s most storied franchises.

The Legend of Zelda: A Link Between Worlds comes out for the Nintendo 3DS on Nov. 22. The publisher provided GamesBeat with a copy for the purpose of this review.