SHANGHAI — ChinaJoy is a visual feast and a spectacle. As China’s largest gaming event, the expo draws more than 250,000 attendees to nearly 100,000-square meters of exhibit space across 10 gigantic halls in the Shanghai New International Expo Center.

Shawn Luan, the senior vice general manager at Howell International Trade Fair, is one of the people who runs the show, now in its 10th year. While Chinese game fans — and thousands of show girls known as booth babes — provide most of the numbers, an increasing contingent of foreign game companies, investors, and business executives attend the show.

That’s because of China’s rising might as the largest game market on the planet and the explosive growth of its mobile game sector, which is expected to increase 93 percent to $2.9 billion in revenues this year, and the continued growth in its $14 billion PC online games market. This year is also interesting because it’s the first time the Chinese government has authorized sales of video game consoles since banning such machines in 2000.

We caught up with Luan to try to make sense of the sprawling show. Here’s an edited transcript of our conversation. 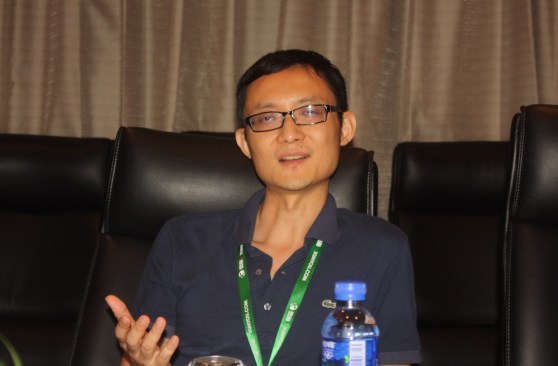 GamesBeat: It looks like you’re expecting a very big show — 250,000 people again? How do you manage that?

Shawn Luan: Probably more this year. Howell is a professional team. We’ve done event organizing for many years. We’ve organized many shows before, including machinery shows, consumer shows, and so on. That’s our business, doing event planning.

GamesBeat: What’s been the rate of growth of this show? How much bigger does it get every year?

GamesBeat: And the number of attendees keeps growing?

GamesBeat: Do you think that the enthusiasm for games is growing faster in China than in other places?

Luan: I’ve been to E3 in the U.S. and to the Tokyo Game Show. All the players there bring a great enthusiasm for games. But it’s a different market with different products in China, compared to the western countries. In the past 10 years, those players in China have risen behind the MMORPG environment. Their paying behavior, the way they play, it’s quite different.

In the U.S., people like to play console games. They’re used to a certain mode. They’re used to packaged games. In China, though, 15 or 20 years ago, there was a policy issued to shut down console game manufacturing here. This history created a new way of gaming here in China, with PC online gaming.

In the last two or three years, due to the fast development of telecommunications and the development of new hardware – smartphones and so on – all these facts have led to the rise of mobile gaming. It’s a combined market here in China.

GamesBeat: Do you have a whole hall for mobile now? That wasn’t there before.

Luan: Yeah. We have a special hall, No. 5. It’s all mobile game channels, platforms, developers. 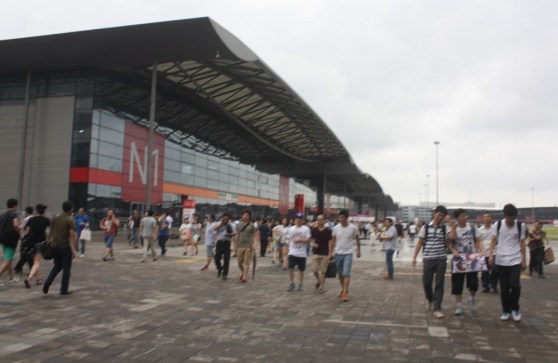 GamesBeat: Do you think that the mobile game business will outgrow the other parts of the market at some point?

Luan: I would assume that it might, over a certain period of time. But looking at the future, there will still be a combination infrastructure for the industry in China. You see the huge population here. That should lead to a huge number of players. Players have multiple choices, multiple attitudes about playing games. Some prefer online or mobile or console or a combination of the three.

GamesBeat: Why do you think the government’s attitude toward console games has changed?

Luan: We’ve been dealing with the government for many years. This sudden happening has to do with the establishment of the free trade zone. China will be a more open country in the future. The policies will become looser compared to many years before. So it’s because of these opening policies in China, so the Chinese market has more opportunities to develop.

GamesBeat: Do you expect a pretty large international audience for ChinaJoy this year? Are more people coming from other countries now?

GamesBeat: Do you think it’s best to have a combination of the business side and the players in one conference?

Luan: We’d like to see that. It’ll reduce the risk of other organizers moving in.

GamesBeat: You can have large audiences from both sides.

GamesBeat: TGS has been shrinking, yeah. I think E3 had smaller floor space this year.

Luan: Right. Many of the big exhibiting companies have merged with each other, so the number of exhibitors goes down. It reduces the number and size of booths. 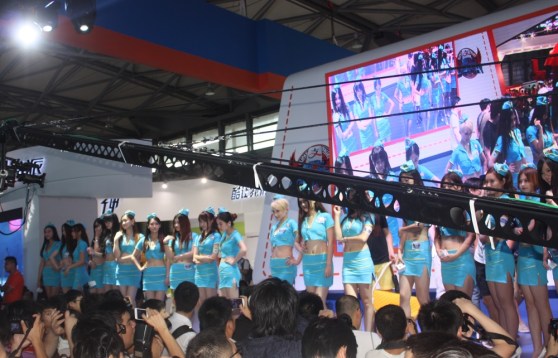 Above: Some of the thousands of showgirls at ChinaJoy.

GamesBeat: ChinaJoy appears to have one very different tradition than other conferences I’ve been to. I see so many more women here, or booth babes, as part of the exhibitions. Has it always been that way? Is it just expected?

Luan: It’s due to the special circumstances of the Chinese market. I see a lot of that at E3 and TGS as well, but the numbers—we have too many in China.

The marketing in China is dominated by online games, and we don’t see online games as a real game until we see the social context among the players. One of the big reasons people play online games is to meet people and make friends. So you don’t see the same methods of promotion as in packaged games. The exhibitors want to increase the attention paid to their products, but the product itself isn’t as attractive, whether through its story background or its gameplay. They want to emphasize the social networking elements, and they have to figure out a way to attract players that doesn’t have to do with content. So it’s either presents, giveaways, or girls.

ChinaJoy has to meet the demands of both players and companies. That’s why you see a big difference between this show and E3. The way they do promotion here is different.

GamesBeat: It sounded like there was a new restriction that limited that sort of thing this year, but I don’t know if that was correct.

Luan: We’ve limited the maximum number of show girls for each booth. We don’t want to eliminate that entirely, but we want to take some control over it. We want a good balance.

GamesBeat: It might make the games stand out a little more.

Luan: Right. If you look at some of the big exhibitors, like Tencent, they’re not having show girls at their booth this year. They only have game demos, places where you can play their games. We have Microsoft and Sony exhibiting this year, and they’ll be doing the same. They want to bring their best products to attract their audience.

GamesBeat: It seems like it’ll make the show stronger to have these bigger companies coming in and having a huge presence. The badges and everything have Xbox all over.

Luan: The policy issues have been big for business people and commercial companies looking to enter the Chinese market. They see the opening policy, so they see a chance to do business here. I believe, in the next year or the year after, we’ll see more third-party software providers and game developers joining them. The future is bright. 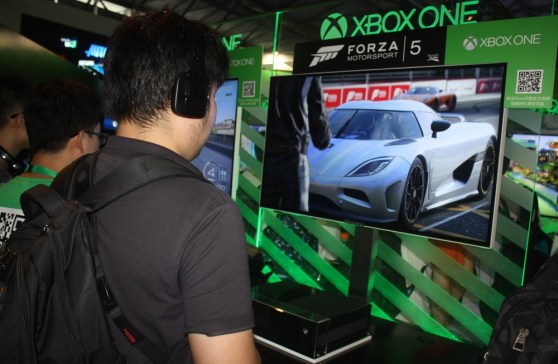 GamesBeat: I saw that Chinese publisher Perfect World was launching three games for the Xbox One. That’s pretty strong backing.

Luan: During the past 10 years, many local game developers have been on the rise. They have strong income through online games. Some of them have gone public and become even more powerful. Those local companies understand the behavior of players here in China better than many others. Their advantage in experience will help them to join and compete in the world market.

GamesBeat: I saw some statistics from a company called the Corum Group. They said that nine of the 10 top game-industry acquisitions in 2012 and 2013 were Asian companies and that 30 Asian companies have a billion dollars or more in cash with an eye toward acquisitions. It suggests that the trend favors Asia and China.

Luan: Local game companies like Perfect World, Tencent, Shanda, they’ve been very much appreciated and protected by the government over the last 10 years. It’s given them the chance to grow bigger and stronger. If you look at the opening policy now, they have the ability to challenge some of the giants overseas, the big game publishers and developers.