17 million guns. Really? Who heard that there were going to be 17 million guns in Borderlands and immediately pre-ordered it? It didn’t make any impression on me. Huge numbers are a growing trend in gaming these days — I can’t even kill someone in Call of Duty: Modern Warfare 2 without getting thousands of experience points. Do we gamers really love big numbers that much? After the jump, I’ll look at a few more examples of numerical inflation in games, and determine if all the extra zeros paid off…. 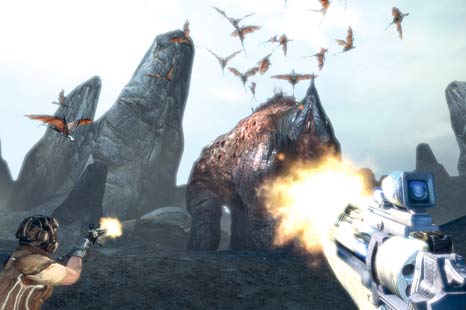 When Borderlands was first announced, developer Gearbox promised an unprecedented 250,000 guns in the game. The latest gun count is 17,750,000. Someone over-delivered. Borderlands creates this arsenal on the fly with a process called procedural generation, which takes into account six factors: color, length, weight, ammunition, manufacturer, and statistics. Statistically, there are many very similar guns in Borderlands, which is why I’m not enthralled by the massive amount of weaponry.

Did the big numbers work? Not for me, but Borderlands has been a surprising success at retail. I would guess that a good marketing campaign and the art style deserve more credit than the “helluva” lot of guns. But then, the game’s loot system is also key to its appeal, and the guns are a big part of that.

While the Battlefield series pioneered an advancement system in multiplayer shooters, Call of Duty all but perfected it. One difference in Battlefield’s system is that you aren’t awarded as much experience per kill. The most you can theoretically get for a kill in Battlefield 1943 is around 30 points, while Call of Duty: Modern Warfare 2 awards players up to thousands of experience points. Modern Warfare 2 broke the sales record for day-one sales with 4.7 million. Coincidence? I don’t think so.

Did the big numbers work? Definitely.

Did the big numbers work? Ask the Blizzard tester who just bought himself a new yacht. [Editor’s note: Actually, I think you’ll be hard-pressed to find that guy.]