Jeff Brown, who served for 14 years as the sarcastic voice of Electronic Arts, has left the company and joined action sports camera maker GoPro as its new head of corporate communications.

We wouldn’t normally write about the chief PR guy for one company moving to another. But Brown’s departure marks the end of an era of verbal jousting at EA, which suffered no slight from a competitor to go unanswered during Brown’s reign across several chief executives. 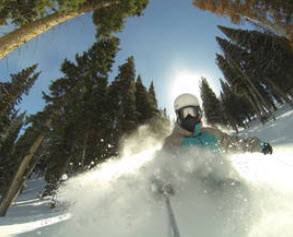 Above: Brown said, “Would appreciate it if you told VB readers it was me. (But it’s not).”

Brown came up with a bunch of funny quotes when EA was lashed by competitors. He played hardball and built a reputation for being both funny and tough at the same time.

After a regime change at EA in which Andrew Wilson took over as CEO after EA parted ways with former chief John Riccitiello, Brown left EA in September with a plan to go skiing, surfing, and hiking. But he owned a GoPro camera, which is used to record videos of your ski runs or other intense sports activities and then share them with the world.

“I fell in love with GoPro and admired Nick Woodman,” (founder of San Mateo, Calif.-based GoPro) Brown said in an interview with GamesBeat. “He’s an incredible guy and the strongest marketing asset for the company. He has built something so much more than a camera. It’s a media channel.”

He noted that GoPro’s community of fans will shield it from larger competitors like Sony and Panasonic, which are moving into the market with their own point-of-view cameras.

“I spent 14 years at EA,” he said. “The only institution I have ever done longer is my marriage. When I started, I thought it would be a 12-month gig. I had no intention of staying that long. I fell in love with games, and I have a lot of close friends at EA. I am completely supportive of Andrew. But it was a good time for me to say goodbye.”

Brown had a hands-on approach to PR, kind of like a bulldog’s.

As for working for many years for Riccitiello, Brown said, “It was really a blast. He was a visionary CEO who never hesitated to attack huge projects. He brought them through a really difficult transition. It was a lot of fun. It was never dull.”

Here’s some classic zingers from Brown:

— “Just once, can Zynga publish a game that they didn’t clone from another developer?” in a story on Zynga’s entry into new game genres.

— “Mitch needs to try decaf,” he told Venturebeat, in a story about Mitch Lasky’s suggestions for turning around EA.

— “Activision wants to hide the fact that they have no credible response to the claim of two artists who were fired and now just want to get paid for their work,” Brown said in a story about a dispute over the Call of Duty developers leaving Activision for EA-funded Respawn.

— “We wish Lorne luck on the game and recommend Lithium for the paranoia and Tourettes Syndrome. Nobody here remembers a jet, a Ferrari, or an offer to buy his company,” Brown said in a story on disputed facts about EA making a bid for Lorne Lanning’s Oddworld.

— “This is like Volkswagen announcing that they’re shutting down for 18 months to start producing BMWs. Don’t assume those Beetles are going to turn out to be BMWs the minute they roll off the line. Developing for PS2 is no small task,” Brown said in a retort to Sega’s former spokesman Charles Bellfield (may he rest in peace), who said, “Watch out, EA.”