Video game storytelling has come into its own. The medium of gaming isn’t as old as books or movies. But some of the most moving and riveting tales are debuting on video game platforms, where a title must keep a player entertained for 10 or 20 hours.

And it’s a big business. Good stories have been the hallmark of the bestselling and most innovative titles, including Journey, Uncharted, The Last of Us, and many others. Solid narratives help these titles stand out from the rest, and they have helped differentiate the Triple-A platforms such as the consoles and the PC in an age of digital gaming on a wide variety of new platforms.

Here’s our edited transcript of the conversation. 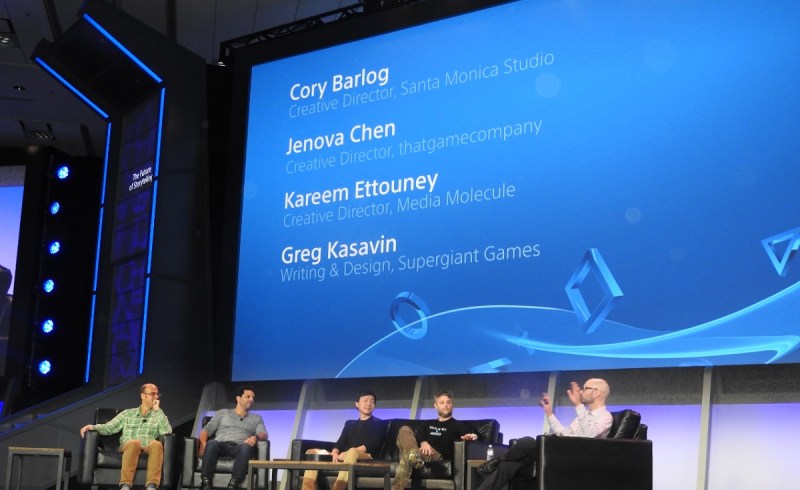 Above: Storytelling panel from left to right: Greg Kasavin of Supergiant Games (not pictured), Kareem Ettouney of Media Molecule; Jenova Chen of Thatgamecompany, Cory Barlog of Sony, and Ryan Clements of Sony.

Ryan Clements: I wanted to ask you about storytelling from your childhood and growing up. Any writer, any artist usually derives inspiration from early in their life. What inspired you when you were growing up, especially in the realm of video games?

Cory Barlog: When I was a kid, what was the first story I read? Everybody Poops. That inspired a lot of my future work, according to some people.

Jenova Chen: Surprisingly, I was the same way. People are always asking me, “Why do you make these games about eating and pooping?”

Barlog: Not as a young kid, but when I was in middle school, I read Ender’s Game. That drew me into the concept of really good storytelling.

Clements: It’s interesting that science fiction first drove you, and then you worked so hard on fantasy stories. Did you ever find that those two were at odds with each other?

Barlog: Not really. In the end you want to find the human connection to any story.

Chen: When we talk about story, I keep going back and forth between world-building and narrative. They’re both part of your story. With Tolkien it’s the fantastic world that makes you want to live in it. I’d always read fantasy and sword-and-sorcery novels, dreaming about being in that world. But as I grew older I started thinking more about a character’s development, a person’s transformation. That really touches me. A strong story can move me to tears, and it doesn’t matter whether it’s a science-fiction or fantasy world. It’s about what happens to a person, the choices they make. That’s what’s interesting.

When I read a good story, I often start thinking, “Should I live my life according to what this character chooses and values?” It makes me think. I feel like I grew up to be a more mature person while thinking about character development in these fictional situations.

Kareem Ettouney: I’m an artist. My angle was comics. I always wanted to be a comic artist, to do graphic novels, to connect to the visuals, the setting, the intrigue. Some of my earliest memories are of the Jungle Book. I love the Jungle Book. It has that lingering story — there’s not much going on, but there are lots of connections.

For me, the anchor for a story is the moments that intrigue me and make me want to find out more about the world. I love the word “intrigue.” When I watch something that inspires me, I’m captivated by it. I’ll draw it. I respond to the characters and their feelings. When I was a kid I’d impersonate characters – a week of being Batman or something like that. But it’s always the visuals, always the intrigue, as my launching point. 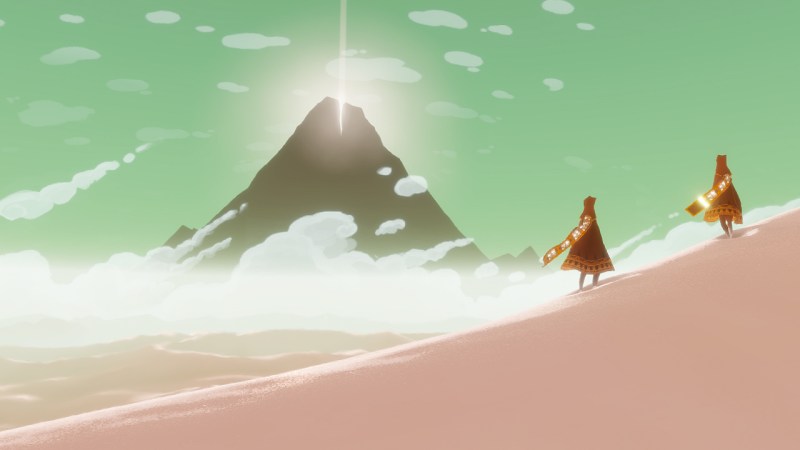 Clements: Is that part of what brought you into the video game space?

Ettouney: My training is in architecture and interior design. Then I specialized in set design for film and theater. Games for me was that, but the fantastical version. The ability to make worlds and characters and go to places the real world can’t. What attracted me to games was being able to tell stories and create worlds that aren’t possible anywhere else.

Greg Kasavin: I always loved reading and writing in general. I was that kind of kid. But I loved games even more. I’ve been playing games since my earliest memories, reaching up for arcade controls when I was four or five. I played a lot of computer games as well.

It was really around the age of eight, when I played a game called Ultima IV, which was a classic RPG. Ultima is pretty old at this point. But if you’re playing Fallout IV or something these days, any big sprawling RPG owes a lot to the classic Ultima games. They were my first exposure to the raw power of video games. I was in this world and able to affect it in a profound way. The moral choices were for me to make. The game didn’t judge me. It just presented the consequences of my actions. At the age of eight or nine, this was heavy stuff.

It not only broadened my horizons as far as what games could do, but also what stories could do. Mechanically the game was really fascinating as well. For me, that summed up the whole thing. I didn’t know how it was done, but I knew that I wanted to do it someday.

Clements: You made a unique leap from games writing, critiquing, and previewing games, into writing scripts and working on games yourself. What was that leap like for you?

Kasavin: Prior to getting in game development I worked in the gaming press for 10 or 12 years, particularly at Gamespot. This is almost 10 years ago now. I left back in 2007. I fell in love with writing about games. I had no competency as a programmer, but I knew I had to do something with games, and that ended up being writing about them, trying to understand them critically.

I guess my underlying desire was to always work on them, though, that creative impulse around wanting to make stories and make characters. It’s an itch that writing game reviews ultimately does not scratch. Finally the opportunity presented itself.

Chen: You mentioned, when you were eight years old, it was a mind-blowing experience to play Ultima IV. I remember playing it when I was about 12. It was a really powerful experience. But when I play Fallout IV today, that experience kind of becomes blurry. My nerves seem to develop some kind of defense system. I’m not easily blown away anymore. But do you think that if you were eight years old playing Fallout IV, would it be more intense than playing Ultima back then?