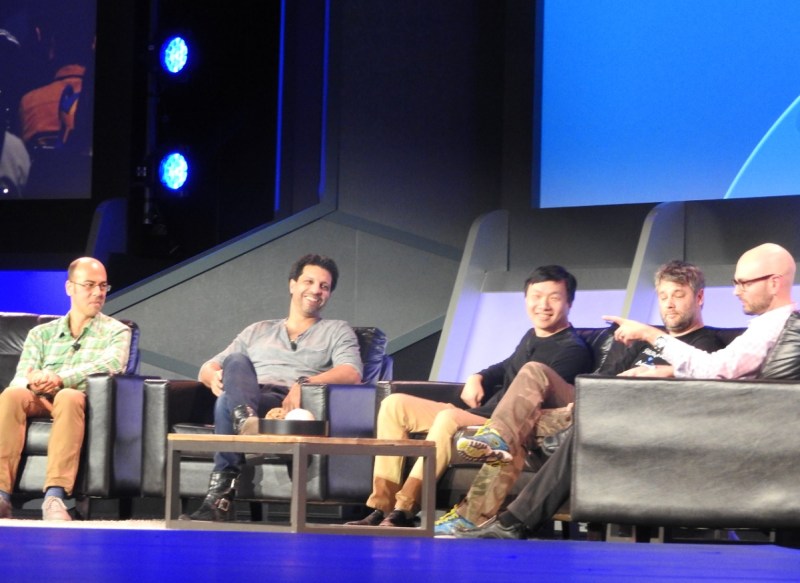 Above: Storytelling panel from left to right: Greg Kasavin of Supergiant Games, Kareem Ettouney of Media Molecule; Jenova Chen of Thatgamecompany, Cory Barlog of Sony, and Ryan Clements of Sony.

Clements: Kareem, I wanted to hear from you again for a bit. Media Molecule is working on Dreams now, which introduces storytelling of a very unusual kind. You give a lot of power and narrative control to your players. How does that work?

Ettouney: The thing we’ve believed in from the start at Media Molecule is empowering the audience to express themselves. Everybody has a story. People keep diaries. They share their opinions around the dinner table. Everybody talks about themselves.

As far as our DIY approach to video games — we wanted to reassemble them, and in the process rediscover how stories are told. LittleBigPlanet was our first attempt to charm the gaming world and make them contribute to one big adventure, one big fantasy. Dream is the evolution of that idea.

A story, in Media Molecule terms, can come from making a space and putting a few characters in it, adding some atmosphere, and creating a setting. Suddenly the spark appears. Who are those characters? And on you go. It’s a very practical method. It’s not an approach like moviemaking, where we iterate on the structure of a classical story. It’s more integrated in the mechanics of the game. We have people laying motifs, people creating visual elements, and it all comes together.

Our angle as far as attacking the realm of storytelling was fusing it with the building blocks of making games, the act of making things enjoyable, and letting you put them together very fast.

Chen: You used a very interesting word. You made LittleBigPlanet around the concept of users creating something out of their dreams. Now your new game is called Dreams. Does that continue in the same sort of meta-setting? 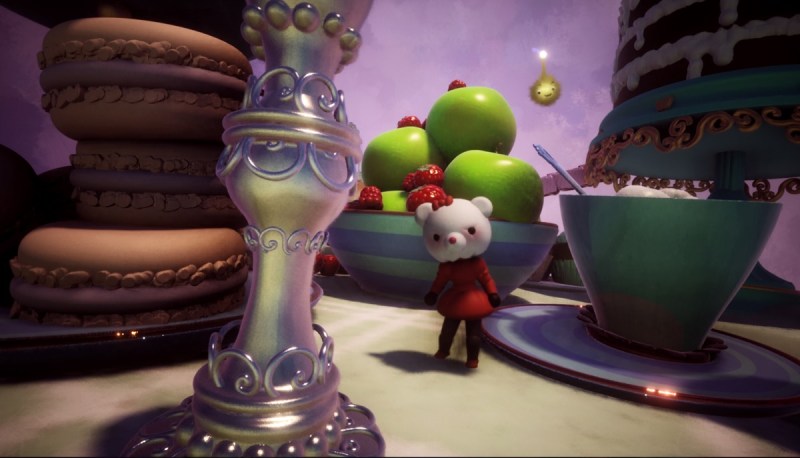 Above: With Media Molecule’s Dreams, you can take this creation and make it your own.

Ettouney: LittleBigPlanet was meant to be very charming and familiar. It reminds you of where you’d play in your childhood — building costumes out of felt and cardboard, that kind of thing. Dreams is more about your personal weirdness. When you go to sleep and you have a fusion of things that happens to you. Why am I standing up in class in my swimsuit?

It’s wonderful, what our imagination can do. We travel from one thing to another in dreams without anything connecting them in any logical way. We wanted Dreams to be the equivalent of that for technology and video games. Not only can you make and express things, but you can connect to the next dream and surf between them in a way that feels like the different acts of a dream.

We wanted to contribute to innovation in the medium. How can we make use of all these personal things, but have some cohesion between them? Dreams seemed to be the only angle that could cope with so much difference, yet have some cohesion.

Ettouney: Performance. Performance is the way. When someone plays with their toys, they add a story. Not just the act of making the toy, but breathing life into it, imagining that. Think of a puppet show. We’re borrowing a lot of these analogies. Think of a musician using a guitar to tell a story. By making our tools performative, they lend themselves to storytelling.

There’s a massive difference between animation and puppeteering. Animation is the craft of breathing life into a virtual character. Puppeteering is performing a story. What you’re doing, you’re doing right now. That sense of aliveness was our angle. We didn’t want you to spend ages making a set and ages making a character, getting lost in those disciplines and those crafts. We wanted you to be in the director’s chair. “Give me a set. Give me some characters. Let’s start performing with them.” Then you look at it and perform again. Maybe add some weird music. Turn it on its head and see it again.

If the tool allows you to work like that, then you can delve into plots and complex stories. Speed of virtual performance was a very big thing for Dreams. We can’t wait for you guys to get your hands on it. 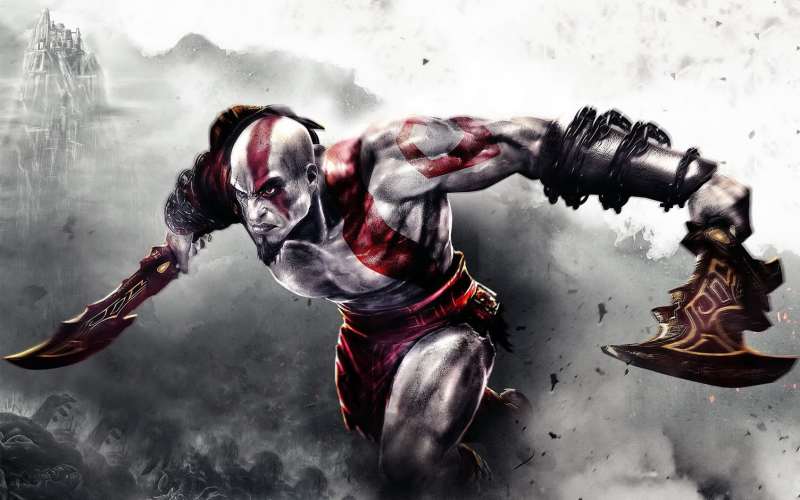 Clements: Performance is an important part of the God of War series. It’s very visual storytelling. Obviously there’s dialogue and narration, but a lot of the storytelling comes just from the performance of the actors, from the visuals, from the sets. How does your team put together those massive set pieces?

Barlog: It’s a long, arduous process of trying things and throwing them out and rebuilding. You start with a core concept, a big idea. That big idea starts to be understood by the collective until people say, “That’s great, but I don’t like any of it. Why don’t we try this?” The willingness to keep throwing out ideas when they’re not holding their own is kind of how we put these larger things together.

There’s the part in God of War II with the collapsing bridge. The direction was, “Hey, we need to get from this location to this location. We should use the grapple.” One of the level designers, Johnny Hawkins, just said, “I’m gonna do something crazy!” If anybody knows Johnny, he’s a great level designer, and he’s crazy. He put together something amazing. It’s a big part of the Santa Monica team in general. They do so much more than you expect.

Clements: It seems very collaborative, then. You said, “We need to get across this bridge,” but this one person says, “I can tell a story with this. I can make an action set piece out of it.”

Barlog: Making it the greatest bridge ever. That phrase maybe echoes through all of the God of War games. Everything that people take on, they want to make it more and more and more.

Chen: I often run into people who have a crazy idea and they want to put it into a game. But how do you tell them, “That’s great, but…”?

Barlog: It comes down to the execution side. A lot of people have crazy ideas. But when someone stays late to put that idea on the screen and then shows it to you — “This is going to be awesome!” Or I crush their dreams and say, “This is horrible.”

Clements: Have you used the word “horrible” to describe someone’s idea before?

Barlog: It’s entirely possible. I read a quote from Sid Meier the other day. Somebody put it on my wall. It said, “Playing games is a series of interesting decisions. Making games is a series of heartbreaking compromises.” Which I thought was fantastic, because it’s so true. It’s a wonderful thing to make games, but it’s also absolutely soul-crushing.

You work on these things for years. You lose sight of what you’re doing so often. You have so many people who are so good at what they do wanting to take each piece and make it better. Sometimes it’s like trying to herd kittens, figuring out what piece is going to fit where.