Shovel Knight is one of my favorite indie games. It manages to capture the magic of 8-bit classics like Mega Man and Castlevania with tight platforming and beautiful pixel graphics. The Messenger is accomplishing many of the same things, but it takes its inspiration from the Ninja Gaiden series for the Nintendo Entertainment System.

The Messenger is coming out for Switch and PC sometime this year. Nintendo is promoting the game, making it a part of its Nindies presentation earlier this week. The Messenger was also playable at a Nindies showcase event for journalists at the Game Developer’s Conference in San Francisco. That’s how I got to play it.

I was immediately familiar inside The Messenger’s 8-bit world. OK, it isn’t really 8-bit. It uses more details and colors than anything on the NES could have handled. But like Shovel Knight, it captures the spirit and look of that era while delivering something a bit more vibrant. And like Shovel Knight, the controls are sharp and responsive. 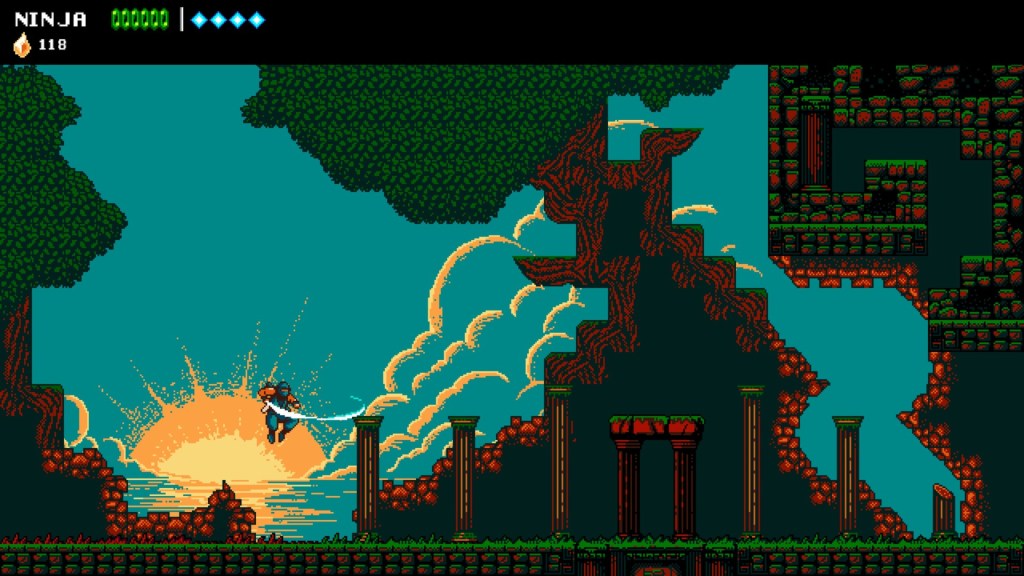 Similar to Ninja Gaiden, your character can attack with a short-range sword and cling to walls. But The Messenger also gives you some unique movement options. You can only perform a double jump if you attack something in midair. This adds complexity to the platforming, since you can reach out-of-the-way areas if you can time your jumps and attacks to land on targets in the air.

The Messenger has more surprises. At first, it looks like linear game. Just like Ninja Gaiden, stages have you moving mostly in a single direction until you reach the end. But eventually The Messenger opens up, sends its character to the future, and trades the 8-bit inspiration for a 16-bit aesthetic.

This is when the game becomes less linear. You travel back to old levels, but you discover that they’re less linear than you thought when you look at them through the 16-bit lens. But you also use special portals to switch back between the 8-bit and 16-bit worlds. It’s a fun take on the Light World/Dark World mechanic we’ve seen in classics in The Legend of Zelda: A Link to the Past, while its less linear levels take on a Metroidvania feel.

I can see why Nintendo is high on this one. Shovel Knight is a big hit on the Switch, and The Messenger serves a similar audience of NES side-scroller lovers like me. But The Messenger also has some creative surprises that keep it fresh. It’s more than a simple homage or clone of Ninja Gaiden.