Never have I thought to myself, “Gee, I wish I could play Dance Dance Revolution with my thumbs.” Then, along came The Metronomicon: Slay the Dance Floor, a riotous rhythm and role-playing game mashup. The Puuba Games studio released The Metronomicon last year, but this expansion has some new goodies: local multiplayer, a new character, new challenges, and passive abilities that are unlocked when you’re on a hot streak. Oh, and of course, some toe-tappin’ tunes.

The expansion comes from publisher Akupara Games and will be out on PlayStation 4 on August 29 and on PC and Xbox One on August 30.

Your group of heroes is tasked by The Grandmaster to track down villainous dance parties and fight monsters using the “Rhythmic Combat Arts.” The silly, fun story is basically an excuse to shake up the rhythm game category with RPG mechanics and it works.

Each character’s abilities align with different elements, which affect how much damage you can do to enemies. Lightning against water, for instance, is super-effective. You can select four characters for your party and also decide how to order their spells. This last bit is crucial because it determines how many notes in a row you’ll have to hit to execute certain spells or attacks.

In battle, you switch between the characters and match the directional “notes” that come flying down from the top of the screen. Once you complete one set of notes, the first spell is locked and loaded; if you keep hitting notes correctly, then you can activate the second or third spell instead.

The gameplay feels different from other RPGs and musical outings. Toggling from character to character reminded me of playing double Dutch jump rope, where timing is key when deciding when you want to jump into the fray. If you start trying to execute a spell in the middle of a particularly thorny section of the song, you’ll likely make a mistake and damage your team. 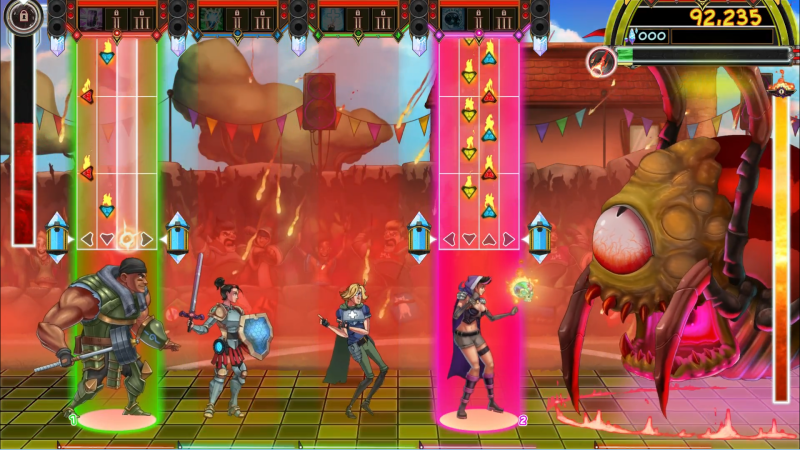 I was expecting the phoned-in, poppy Japanese electronic dance music that you get with Dance Dance Revolution, but Metronomicon’s soundtrack has variety, like Kubbi‘s chiptunes and Shiny Toy Guns‘ rock music. Not all of the songs were memorable but enough were that it was a win in my book.

The gameplay reflected the variety of musical genres. Some songs required back-to-back frenetic chords while others danced across the keys with arpeggios of movement. Each song has a different feel and pace, which keeps the combat from getting stale and repetitive. Each of the songs has an easy, medium, and hard mode, and the difficulty scaled appropriately across each of those levels. It’s great that an option allows you to play at your own pace. A global leaderboard constantly hovers in the top-right corner, which is great motivation to challenge yourself. You can also go to the arena to take on mini-challenges that can give you loot to make battling easier.

The new multiplayer mode made it simpler to tackle tougher songs as well. With a second player, you can divvy up the screen so that each player takes two characters. It’s a fun co-op mode, though it doesn’t significantly change up the gameplay. 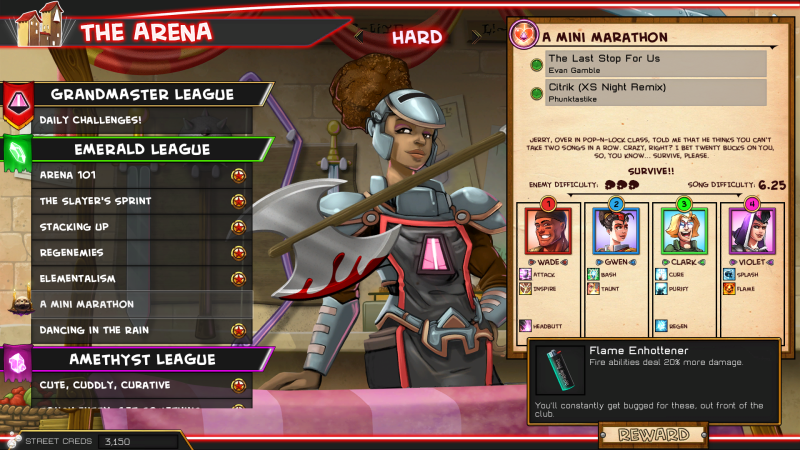 A style that doesn’t totally jive

I’m not a fan of the art style, though some of the background art was colorful and appealing. I appreciate the hand-drawn aesthetic, but something was a little too cartoonish and unpolished about the way the characters looked. It felt cheesy, and not in a good way, especially when it’s accompanied by some cringe-worthy voice-acting. The humor often felt flat for me, though I did enjoy some of the cheeky item names and descriptions.

This is a minor quibble, since I was often mashing buttons on my controller and trying to keep my streak going. In the middle of combat, I didn’t have the chance to really examine the palette-swapped enemies, so this really only bothered me during the cutscenes. 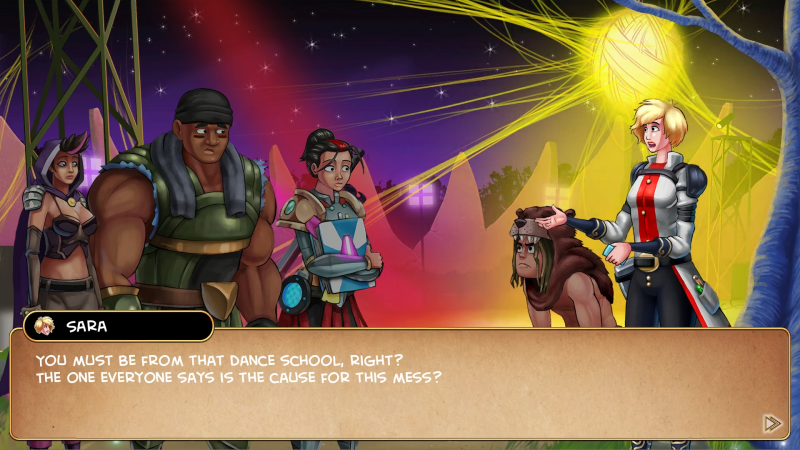 Club-hopping can be dreary

You can visit five different “worlds” or levels, each of which has its own look and set of songs. But the differences pretty much stop there. I found myself missing a sense of progression between the worlds. Each level feels the same, though with some incremental increases in difficulty. Your characters level up after each battle, but that doesn’t feel particularly like progress because you don’t get to distribute stat points or anything like that.

One of the cool things about bosses is that they sometimes turn notes into attacks. Each time you fumble and miss a note, it damages you. It would have been awesome if each of the level bosses had a different attack that affected the notes or your characters in a different way. But unfortunately, once you’ve fought one boss, you’ve fought them all because they all behave exactly the same way. The Metronomicon: Slay the Dance Floor is a lot of fun if you’re into rhythm games. I do wish that each of the levels were a bit more different, but what it lacks in variety, it makes up in solid gameplay. I don’t think any other game quite like it is out there.

I only got a chance to play using a standard controller, but I do know that it’s also compatible with Rock Band 4 guitars. Next, I hope they’ll consider rigging this up for DDR pads as well.

The Metronomicon: Slay the Dance Floor comes out on PlayStation 4 on August 29 and on PC and Xbox One on August 30. Publisher Akupara Games sent us a code for this review.