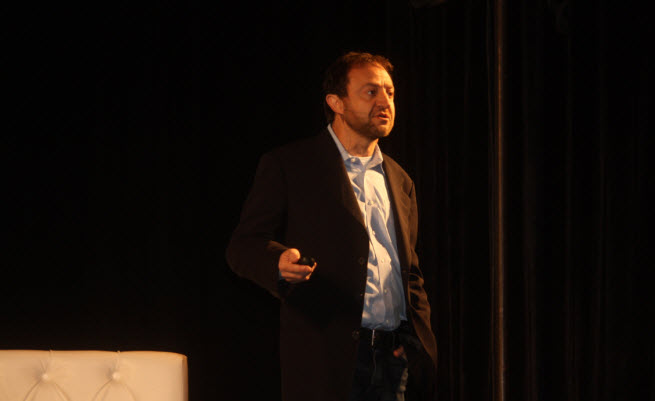 SAN FRANCISCO — Simon Khalaf is a mobile believer. The Flurry chief executive built a case for the explosion in mobile devices and apps in a talk Thursday at the Flurry Source 13 conference in San Francisco. If your company hasn’t gotten on board the mobile bandwagon, then you’re pretty late, Khalaf argued. 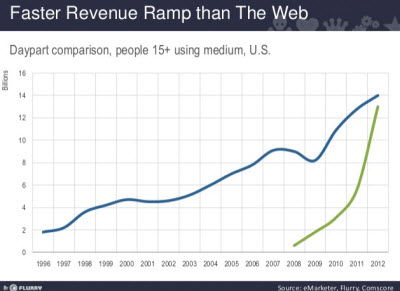 “You go to any airport and any country,” Khalaf said. “It feels like the PC is gone.”

App revenues have grown at a 129 percent compound annual growth rate since 2008, starting first with ad revenue and then virtual goods purchases in free-to-play games. Now virtual goods revenue is significantly higher than ad revenue. That revenue ramp is steeper than the ramp in revenues for web sites (see graph at right).

“This industry did not exist in 2008, but in the last year, $18 billion in revenue was generated from mobile apps,” Khalaf said. “It’s taken the web about 16 years to get huge, but mobile is matching that in about four.”

People spend about 43 percent of their time with smartphones playing games. But social networking has come on strong, accounting for 26 percent of time spent. Entertainment accounts for 10 percent, while utilities are another 10 percent. In the past year, session time in social apps has increased 387 percent on mobile devices. Media and entertainment has grown 268 percent, and games have grown 107 percent.

Social networks such as Facebook account for 47 percent of the time spent in mobile social apps. But 29 percent of the time is spent in messaging apps, 19 percent is video and photo sharing, and 5 percent is dating. For media and entertainment apps, prime time mirrors the prime time for television viewing in the early evening. In closing, Khalaf said, “Wake up and disrupt something.”