Dungeons & Dragons may never be the same.

With the new edition of the role-playing game that founded them all — and is the wellspring for the billions of dollars such games have made over the past 30 years, be they on tabletops, PCs, consoles, online, or mobile — comes a new emphasis on its most popular monster, dragons. The wyrms haven’t been this prominent since Dragonlance, a world setting dealing with gods and dragons that also had a line of best-selling novels, since the 1980s.

In the second of a two-part interview, Neverwinter lead producer Rob Overmeyer and D&D brand manger Nathan Stewart tell us about designing games, both for paper and for monitors, in the Forgotten Realms, the most popular world in D&D; about the nefarious Cult of the Dragon, how this shadowy group has gone from animating dead dragons to bringing the terror of Tiamat to the world; how the Cult changes the balance between good and evil in Neverwinter; and their favorite dragons.

GamesBeat: What influence, if any, has Neverwinter the MMO had on the new Realms?

Nathan Stewart: The biggest thing that it’s done is allow us to tell these bigger, connected stories that are going to play out to both the digital and physical consumers together. In the old days, while you might have had an awesome adventure for people who are rolling dice with a Dungeon Master, it forces us to ask questions like, “Is this a great experience for all D&D players? Does this work for the Neverwinter crowd as well?” 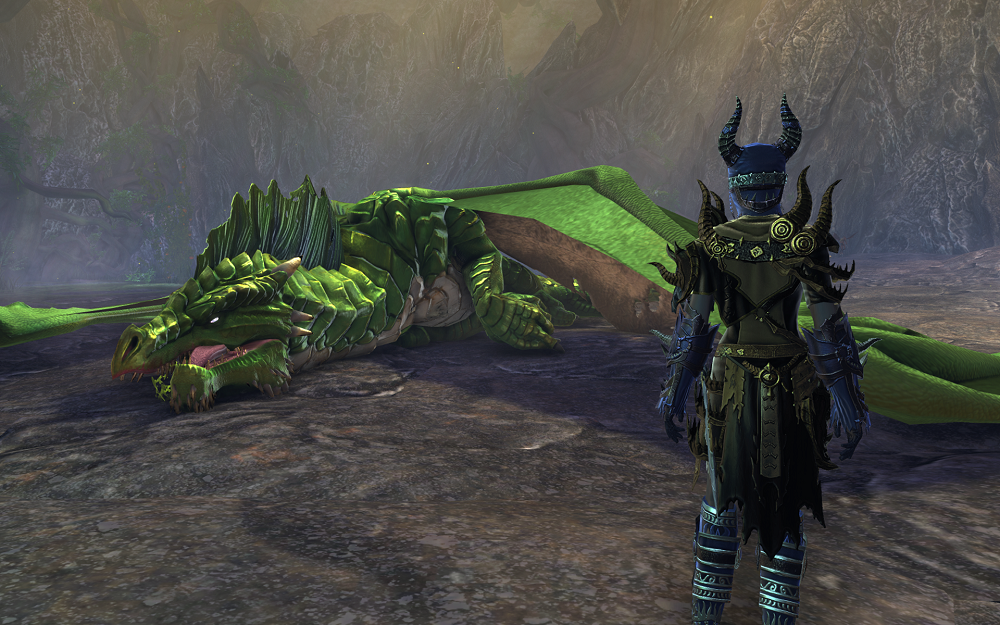 Above: Even dragons sometimes lie down on the job.

The influence, then, number one, is having a great partner who keeps us committed to fleshing out that story and showing all the great cultures on the Sword Coast. Number two, it’s helped shape our storytelling by combining together to get the best creative minds on both teams and come up with much bigger, more grandiose stories that work for multiple products. It’s the first time we’ve really embraced this. You can have D&D players sit down and talk about the Cult of the Dragon, and they’ll all be talking about the same thing, even though they might not all be talking about playing the same game.

GamesBeat: Rob, what has been the best aspect of working with Wizards as far as integrating this material into the relaunch of the game?

Rob Overmeyer: It’s like a geek dream come true. I can elaborate on that a little bit. Working together and coming up with a platform-agnostic story, one of the things that I get to do and my team gets to do is, we get to geek out and ask questions about things that we’ve long wondered about. I wonder about the Harpers and where they’re going and what’s happening with the Silver Safehold. I get to be able to poke at those things. I get some sideways looks — “Oh, you never know what’s going to happen there.” But it’s great to be able to talk about those things and work to figure out what’s in the future. We can work together as they say, “What do you guys think about this on the lore side?”

We tried to have a very professional meeting at our last large meeting, but to be honest, half the time it turned out to just be thinking about the what-ifs and geek-out moments about what we could do going forward. So that’s probably the coolest thing, the most fun I have working with Wizards — being able to get glimpses of where everything is going. Even though they still won’t give me everything I want to know.

Stewart: We did stay on track for a good hour or two in that meeting. It wasn’t until after lunch that you guys really digressed into geekdom. But it’s nice to see so many people in the room who are passionate about the brand. When I think about Dungeons & Dragons and how many game developers and storytellers it’s inspired through the years — what do we have now? We had to get more chairs. We had 20 or 30 people, and they’re all making a respectable living with this game that they loved. If you told their 12- or 15- or 18-year-old selves, they’d have said, “Get out of town! There’s no way.” “No, serious, we’re all gonna sit in a room and talk about D&D and get paid to do it.”

Overmeyer: It’s pretty great when meetings that start off about financial projections turn into what type of demons we can let you summon.

GamesBeat: My Realms knowledge isn’t as good as it used to be, so I apologize if this is just a ridiculous question, but I don’t remember any significant dragons in Neverwinter’s area. Are you making up new ones?

Overmeyer: We have dragons in Neverwinter and the Sword Coast in multiple zones that are around. I imagine that there’s probably more, but I don’t know about whether or not they’re brand new to the lore or whether they’re known dragons.

Stewart: It’s a mix of both. This is getting into a bigger story question. I think the real heart of what you’re saying is very true. In the Forgotten Realms, especially for a game called Dungeons & Dragons, it’s funny, because dragons haven’t often chosen to play this really in-your-face role in the world. Frankly, I think that as a race, they feel so much above the other inhabitants of Faerun. They’ve chosen to be out of reach.

What’s really going on here, I think, is that there’s this cataclysmic shift. The dragons and the Cult of the Dragon are going to play a role in that. It’s an opportunity for the dragons to take their proper place and rule all the other races in Faerun. I don’t think that the dragons in Faerun all care as much about whether Tiamat comes back, because as you know, different colored dragons have very different motivations. But I think what we’re seeing here in terms of Neverwinter and new dragons coming in or old dragons emerging from their lairs nearby — this is all part of a bigger idea. The dragons see this as an opportunity to gain their rightful place on top of the food pyramid.

Now, as far as old dragons or new dragons, it’s all of the above. You’ll see good dragons and evil dragons coming out of the woodwork for this adventure, because it has such a big impact on the Realms.