The system is broken, and game designers make systems 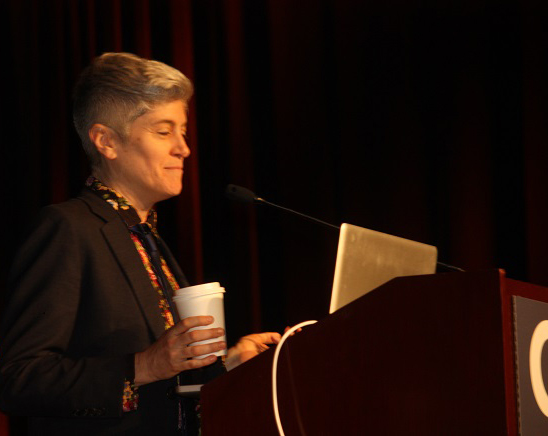 Above: Associate Professor Colleen Macklin of Parsons: The New School.

Colleen Macklin is an associate professor in the Department of Communication Design and Technology at Parsons: The New School and the director of the Prototyping Education and Technology Lab, which develops games for experimental learning and social engagement. Throughout her talk, Macklin ran footage taken from cameras focused on escalators or entrances to rooms at GDC, and she asked the audience to glance at the video from time to time and notice the patterns. Most of the people onscreen at any given moment were white and male.

“There are moments when you’ll recognize someone or something that breaks the pattern. These are kind of the moments I live for,” said Macklin. “[It] makes it feel less homogenous, brings in more variety. So today I’m going to actually describe some things that I think we can do to break that pattern more often.”

Macklin is concerned about patterns of speech. When Meggan Scavio, the general manager of the Game Developers Conference, was interviewed by GamesIndustry International about GDC 2014’s advocacy track, Macklin read the comments on the article and found worn-in patterns among responses from male game developers as to why there aren’t more women in their companies.

“Yes, the people we employ to make our games is highly discriminatory, but the discrimination is all to do with their ability to perform the task at hand,” read one comment. “There are not many female engineers or programmers because that doesn’t interest most females,” read another. “I just think video games is something that appeals more to guys than girls,” read a third comment. These are simply false propositions, old ideas that get recycled over and over again by men who don’t want to take a cold, hard look at the reality of gender inequality in the video game industry. Laralyn McWilliams, Lauren Scott, and Anna Kipnis are not isolated examples.

Macklin is concerned about the patterns that prevent women from speaking at industry conferences. When Paolo Pedercini observed that the Independent Games Summit at GDC this year had an all-male lineup, he kicked off a heated debate. Supporters of the IGS pointed out that there were women in the Summit, but they were all part of the Indie Soapbox session in which each speaker gets just five minutes at the podium. People involved with the Summit claimed a lack of quality panel submissions. Women whose talks were rejected began to speak up. It was another, familiar pattern.

“Observing [patterns], though, is just a beginning. I do think we should open our eyes and observe them and talk about them, but I think we actually need to do something in response to break them,” said Macklin. “We’re designers. We’re talking about systemic issues, and we design systems.”

“The advocacy track is a start, but let’s make sure it doesn’t become a backwater for these kinds of issues. It helps us give voice, identify, and hopefully break some of these patterns … but if this panel is successful, if the track is successful it will eat itself. It will be the cause of its own obsolescence, and let’s hope for that in the future,” said Macklin. She wants the community that has gathered around the #1ReasonToBe banner to support other events such as the Queer Games Conference, GaymerX, and IndieCade East, which Macklin cited as one of the most diverse conferences she’s ever attended.

Diversity is at the edges, and anyone who wants to promote the cause of diversity in the video game industry needs to expand their networks and make connections to those in the edge spaces. “It’s important to take chances and let new people in,” said Macklin. 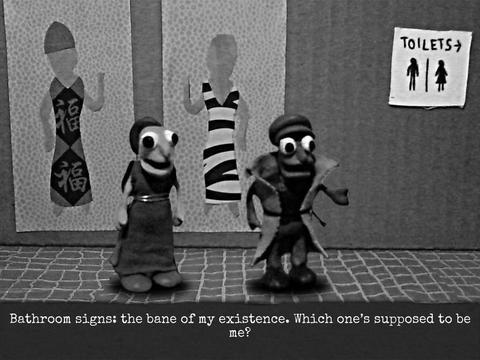 Above: Dominique Pamplemousse in “It’s All Over Once The Fat Lady Sings!”

The panel ended with a presentation by Deirdra “Squinky” Kiai, who is the creator of the indie game Dominique Pamplemousse in “It’s All Over Once The Fat Lady Sings!” It was nominated for four Independent Game Festival Awards this year. Kiai does not use gender pronouns to describe themself, and it was through playing the browser-based role-playing game Echo Bazaar, which is currently titled Fallen London, that Kiai came to embrace their identity.

“As I created my character, I discovered that, along with the standard man and woman options, I could also choose to be a person of mysterious and indistinct gender,” said Kiai. “When I realized that choosing that third option felt more right than anything, that I didn’t have to be a defective woman or a defective man but just myself, something inside me just unlocked. Slowly but surely, I started to dress and present differently, so that when I looked in the mirror, I started to see someone who looked more like how I felt. I started to embrace the use of singular they. Who cares if it’s grammatically incorrect?”

A running gag in the Monkey Island series of adventure games is various characters lying and saying that their name is “Squinky” by way of hiding their identity. Kiai chose to adopt that moniker as her nickname, and right after finishing her undergraduate degree, they got a job in the game development industry working for Ron Gilbert, who created the Monkey Island franchise.

Kiai found making video games much easier than trying to fit into the industry as a developer. They were neither one of the guys nor one of the girls. They were invisible. “And it’s not just true of me; it’s true of all manner of us who don’t fit a certain young, thin, white, femme, able-bodied heteropatriarchal beauty standard,” said Kiai. “The double-bind of, if you’re hot enough, you get to have your hard-earned accomplishments diminished, and if you’re not hot enough … well, you’re defective. Disgusting. Completely irrelevant. Heads, they win. Tails, you lose.”

Kiai pushed their way into the video game industry for fear of disappearing if they didn’t. “I became one of those outspoken angry feminists everyone loves to hate, daring to say out loud all the things everyone else was silent about, because they didn’t want to burn any professional bridges,” Kiai said. “The one they always privately claimed they agreed with, except, you know, ‘We still want to be marketable to gamers.'”

“I became their scapegoat. I was willing. I was young, foolish, and had nothing to lose I didn’t last in the industry very long, as you can probably imagine,” said Kiai. “I was pushed over to the margins, where I quietly worked alone on my own projects, desperately struggling to find my voice. They could exclude me all they wanted, but they couldn’t stop me from making games.”

Dominique Pamplemousse was a way for Kiai to express frustration with binary conceptions of gender. “I don’t think anyone can fully be described by a gender or a race or a sexuality or any other limiting category. I think there are as many target audiences as there are people,” said Kiai. “One day, I want to see a game industry that understands this. I want to see a game industry that tells its young and up-and-coming developers that their stories are valuable, that their unique creative voices are worth cultivating.”

Kiai believes that things are starting to change, in no small part due to the number of artists, critics, and academics who are gathering at panels like #1ReasonToBe or at other conferences and events. That said, Kiai’s game did not win any of the awards for which it was nominated, and rather than being upset by this, Kiai was relieved.

“The thing is, being recognized for awards like the IGF means being seen. And being seen, when you’re a person who looks like me, is a double-edged sword,” Kiai said. “The more attention and notoriety I get, the more I start wondering when all the 4Chan trolls are going to come out and get me. Like they’ve done to, oh, pretty much every single person I like and respect in games. I’ve already started to see them pop up on Steam. I know they’re just trolls, and I’m just supposed to ignore them. But honestly? I’m terrified.