Jeff Vogel’s been writing games, by himself, mostly in his basement, for longer than most people have been playing: 22 games in the past 22 years. The most recent, the role-playing game Avernum 2, just published last month.

His Spiderweb Software company name comes from a real spiderweb in that basement. He’s one of the few full-career indie developers still working at it in his 40s, and he never once turned away from writing games on his own, not even when the invitations and the money came.

Vogel is also one of the most interesting guys in the business. Take these snippets of things he said in this interview: 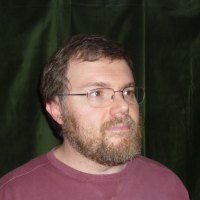 “RPGs are ludicrous.” (Vogel develops nothing but.)

On the 20th anniversary of the publishing of his first game, Exile: Escape from the Pit, I spoke with him in a video call, asking him to riff on that process, indie developing, his basement, and the game industry in general. Here’s the “good parts” version:

GamesBeat: Is this the infamous basement I’m seeing behind you?

Jeff Vogel: No, no. For the first 18 years, all of our games were written in my basement, but two years ago, we moved into a nicer new home. Now I get a room on the main floor. All my comic books and old video games and Magic [the Gathering] cards are on shelves all around me, just to make me feel comfortable and enfolded.

GamesBeat: What got you started in the business?

Vogel: I’ve always been compelled by games and puzzles. I started out probably by drawing mazes for my parents to solve when I was 5 years old. I was born in 1970, so this is just about the time that computer games were being invented. I remember my dad coming home from a bar and saying, “Hey, Jeff, I saw this cool thing that you might like, it’s called Pong.” As soon as I started playing video games, I was immediately just compelled by them. As soon as I got the chance, I learned to program. I started programming games, I think, when I was 8, 9, [or] 10. It’s always been a compulsion.

GamesBeat: What is it about them that captured your interest?

Vogel: I think part of it is just a matter of brain chemistry — the idea that video games, when really addictive and well-crafted, can addict you and cause your brain to release satisfying chemicals that create the illusion you’re accomplishing something, even though of course you’re not. It’s a unique art form.

Above: Exile: Escape from the Pit

GamesBeat: Tell me about the first game. How did it begin?

Vogel: The first game I wrote professionally was called Exile: Escape from the Pit. I was in grad school studying applied math. I really kind of hated it.

After passing my qualifier exams, which is the thing you have to do to show you’re actually serious about it and ready to start research, I was really burned out. I decided to take a few months off from that and do what I’d always secretly wanted to do, which was write a real video game.

Then I released it as shareware, which was a thing that existed at the time. [You could get the software free, then choose whether to pay for it.] Much to my great surprise, people bought it.

It was at a real lull for RPGs in the industry. So many indie success stories just come from having the right game at the right time. People are hungry for a shooter or a [real-time strategy game] or a tactical game or what have you, and there’s nothing on the market. Then you come out with the perfect game at the perfect time.

It made money, and then I quit grad school almost immediately and said, “OK, I’ll make a go of this.” It’s run from there.

(Trailer for Avernum: Escape from the Pit, the rewrite of Exile.)

GamesBeat: What led you into RPGs, as opposed to any other genre? It’s a long way from Pong.

Vogel: RPGs have always been my jam. It’s the combination of the addictive, the illusion of achievement, combined with the storytelling. I’ve always said that gamers will forgive you for having a good story, as long as you allow them to ignore it. Not everyone is as into the storytelling aspect of it. That’s totally cool. But I love video games as a storytelling medium more than just about anything.

Most indie RPGs are just parodies of RPGs. I think that’s cheap. Let’s be clear: RPGs are ludicrous. They are a ludicrous paradigm in every way. We know! And yet they work really well for telling stories.

The basic paradigm in an RPG is that you start out as this weak little guy with a wooden dagger or whatever, and you gain power and gain knowledge and you grow to the point where you’re powerful and influential. You start a child, and you become an adult.

People make a visceral connection to that. There’s something about that that feels true, because in a sense that’s how you go through your life. You start weak, and you become strong — hopefully.

Just about everything is an RPG now. Every game you play borrows RPG elements as far as gaining experience and using it to develop a character, because that feeling of growth, the feeling of accumulation of power, just works. It just works.

GamesBeat: You’ve stuck with this genre over time, but the individual games you’ve created have changed quite a bit since those early titles.

Vogel: I always write what I want to be playing. That changes. It helps me keep it fresh.

At the same time, when I was young and just getting started and didn’t know what I was doing, I had a freeness and a looseness and an energy that I don’t really have anymore. I didn’t know how anything I was doing would turn out, so I just threw everything in there, and through some weird alchemy, it worked.

A lot of it was just, by modern game design standards, broken.

GamesBeat: Can you give us some examples?

Vogel: In my early games, I had a spell called Create Quickfire. Quickfire is this fire that expands and kills everything uncontrollably, so you could walk into a dungeon, make Quickfire, and walk outside and wait a couple minutes. Then you’d go back in, and everything was dead.

That is ludicrous. There is no way that any professional game designer would consider that good design. And yet people loved it. I can’t do that anymore. I am constitutionally incapable of doing that. I envy my younger self for being so unconcerned.

Above: An adventure from Exile III: Ruined World, which had the overpowered Quickfire spell. (Alas, no fire in the screenshot.)

One of the biggest challenges with the Avernum games — Avernum 2 [which released in January 2015] is a rewrite of a game I wrote in 1995. One of the biggest challenges I’ve had is to just respect my younger self, to look at something and say, that’s dumb, that’s broken, that’s out of control, and then just trust my younger self and trust my fans who loved this game and leave it be.

For example, in Avernum 2, there’s this crystal. You can go make copies of monsters and then summon them to serve you in later fights. I left that in. It was a struggle. I had to grit my teeth, but I left it in the new game, because it’s ridiculous.

You can go up to a lich or a dragon or some sort of ridonkulous monster and make a copy of it and go to another dungeon and start photocopying this stupid mega-powerful monster. 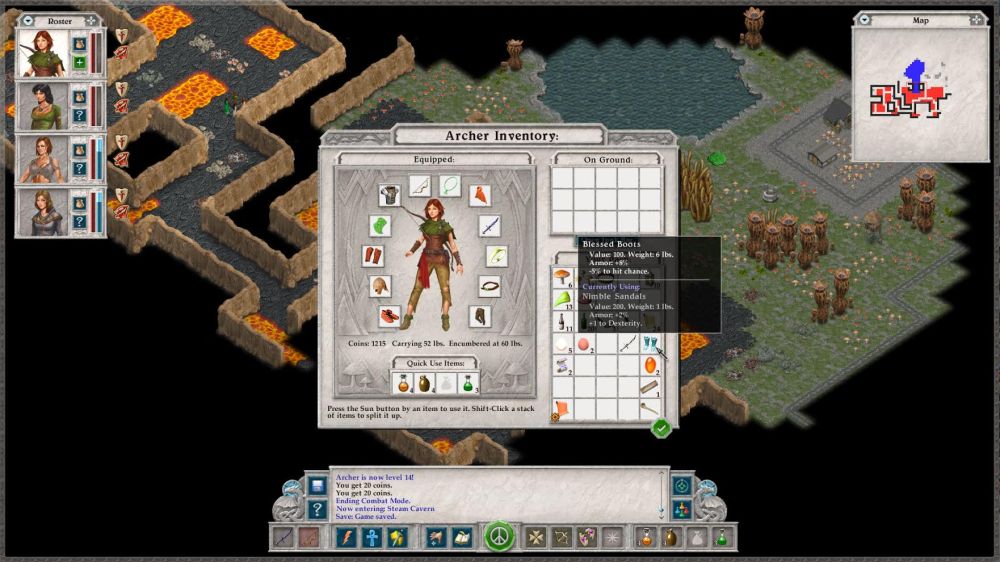 Above: In Avernum 2: Crystal Souls, you can hit stuff with characters like the archer, shown, or attack things with copies of the monsters you’ve defeated.