Let’s face it: it’s usually really, really hard to transition franchises established on console or PC to smartphones and tablets. It’s not just from the lack of traditional console inputs – the way people engage with games on these mobile platforms is fundamentally different. Understanding how and why people consume mobile games is a crucial element to success in that arena.

Until fairly recently, Square Enix has had a tough time in the mobile market with its flagship Final Fantasy franchise. Several classic Final Fantasy games are on iOS and Android, but 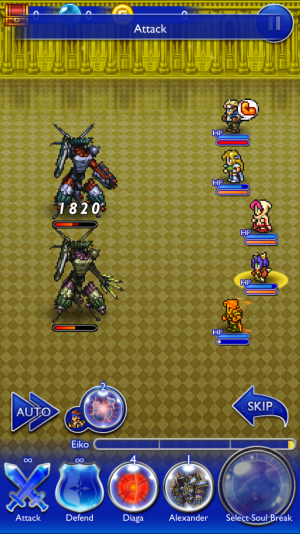 they’re at prices some view as too high — and sometimes with controversial graphical overhauls. The nadir has been Final Fantasy: All the Bravest, a low-quality, microtransaction-laden original effort that is bereft of so many things that the franchise so beloved.

Yes, Record Keeper is mostly combat. You pick a stage, hack your way through a series of fights (based on the classic pseudo-realtime Active Time Battle system, a hallmark of 16- and 32-bit Final Fantasys), and collect EXP, gil, and loot when you’re done. Then you just move on the next set of fights. It’s fast, it’s fun, and it’s surprisingly satisfying. While you can auto-battle through a lot of fights, that’s not necessarily a knock against the game – sometimes it’s nice to just set your army to level up on their own while you focus on sometime else for a moment or two.

Eventually you’ll encounter boss enemies, who add variety with special attacks and special combat conditions, so you’ll need to plan and prepare your army of Final Fantasy cast members for these challenging fights. “Synergy,” which grants bonuses if you bring characters and equipment from particular FF games into certain fights, is crucial, as are “Soul Breaks” — special, limited-use character skills that can dramatically change the tide of combat.

If 90 percent is combat, the other 10 percent is figuring out your strategy before fighting: upgrading weapons, creating and enhancing skills, arranging your party and skill loadouts, and so on. While it isn’t as time-consuming as combat, it’s every bit as important – good party/skill/equipment composition is every bit as crucial as making quick choices in combat. Getting quality equipment involves using one of two premium currencies to pull random draws: gems (bought as IAP) or mythril (earned in-game). It’s extremely generous on the currency front, giving out enough mythril through regular fights and bonuses to acquire a solid armory of equipment without needing to spend much (if anything). 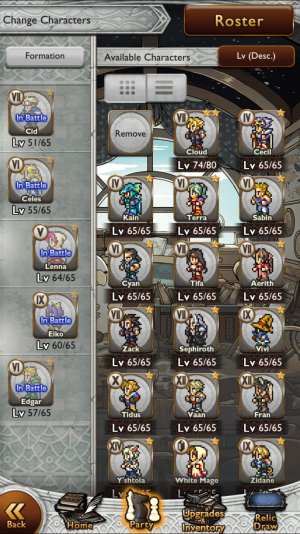 Beyond offering fun slices of FF fighting, the game delivers a lot on fanservice front as well. Events with new characters rotate in and out frequently, and dungeons based around later games showcase some cool pixel-art interpretations of familiar characters and enemies. It also recently received a comprehensive interface overhaul, improving the overall look and ease of use of the app.

Record Keeper is possibly the best mobile Final Fantasy game yet released in English: It’s tailored smartly to the platform, it offers an authentic-feeling FF combat experience, and it doesn’t feel grossly exploitative in the same way many free-to-play games (and even some of Square Enix’s paid games) do. It’s a smartly designed way to bring a fun and familiar part of a famous franchise to a distinctly different platform, and for that, I feel like Record Keeper deserves more credit than it gets.