“Retro” is no longer a selling point.

The market is now flooded with games that capitalize on nostalgia for the humble pixel, so you need to make something special to get noticed. Shovel Knight is perhaps the prime example of modern retro done right, but it also sold itself with its unique evolution of 1989 NES game DuckTales’ pogo mechanics, something retro game fans have been clamoring for decades now.

This is probably why not nearly enough people noticed Brazilian developer JoyMasher’s Odallus: The Dark Call when it came out earlier this year. To most people’s eyes, it looked like a competent Castlevania clone. But beyond that is an excellent game packed with quiet innovation and engaging levels that even rivals Shovel Knight’s quality.

If you remember how stiffly the original Castlevania games controlled, then you’ll have some idea as to how playing Odallus feels. The combat has a more deliberate pace than most action games, and you really have to use your platforming wisely to avoid enemy attacks as you progress through the levels.

And you’ll need to, because Odallus offers a surprisingly tough challenge that harkens back to the old days without replicating the more unfair difficulty of the era. Modern niceties like checkpoints help ease the pain, but you’re still left with a satisfying challenge thanks to nimble enemies and horrific Lovecraftian bosses.

Speaking of Lovecraft, Odallus creates an amazingly oppressive atmosphere within its limited framework, incorporating creepy music, a cryptic backstory, and twisted enemy design to set the stage for an unsettling theme not often seen in retro games. 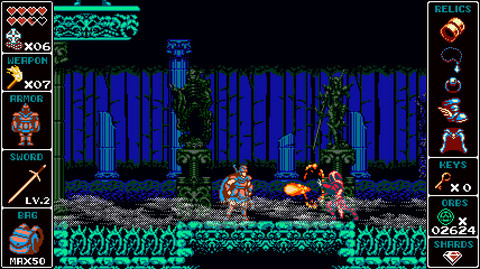 But Odallus offers more than just an underutilized theme. In fact, like Shovel Knight, it brings back a mechanic that people have been wanting to see expanded upon for a long time, though admittedly a lot less flashy and obvious than pogoing.

Instead of simply sticking with a stage-by-stage structure, Odallus has secret exits in each of the four different initial levels that you can get to using abilities you find in other levels. Not quite full-blown metroidvania progression, it instead very much resembles Demon’s Crest, Capcom’s masterful oft-forgotten Super Nintendo Ghosts ‘n Goblins spinoff. Making this semi-nonlinear game stage-based cuts down on backtracking while encouraging you to revisit stages and find more secrets.

This segmented approach may seem strange to those not familiar with Demon’s Crest, but being so anachronistic actually works in Odallus’s favor, playing into the utter strangeness that casts a pall on the game at large.

What elevates Odallus to being one of the best games released this year is how it feels, not just how it controls but also how it all comes together. The combat is appropriately calculated and methodical, the audiovisual presentation strikes an appropriately creepy tone, and the upgrades you get change the way you play through the levels. Everything feels just right.

And yet it manages to carve out its own identity thanks to the oddness in the margins. It’s in the structure, which feels positively strange because no one has cribbed it since the SNES days. It’s in the lonely world, the slightly off-putting monsters, and the mysterious, eldritch environments you visit. It’s even in the weird vertical status bars that show your health and inventory.

It’s not enough to be “retro” anymore, but it’s also not enough to just be “very good” either. You have to do something obvious and flashy to gain traction in people’s minds. Odallus: The Dark Call emphatically does not, looking like the ultimate also-ran. But it is without a doubt one of the best releases of 2015. Odallus feels slightly off in many of its dark corners, and that’s exactly what makes it special.