As the yearly best-of lists start cropping up around the Web (including right here at GamesBeat), you probably won’t see Resident Evil: Revelations 2 win any big awards.

I can understand why. It doesn’t have a great hook to fall back on, no big new feature to get people excited about the Resident Evil series again. Revelations 2 doesn’t push any of the hardware it’s on or wow with its visuals the way others in the series have. It isn’t Resident Evil 7, but rather the continuation of a side series. The original Resident Evil: Revelations got mostly positive reviews but, as a 3DS title ported over to consoles and PC, didn’t have much momentum behind it. Resident Evil 6 was a critical flop. The biggest Resident Evil-related news of the year was the announcement of of a Resident Evil 2 remake.

Horror is other people

What makes Revelations 2 so special? It does right by co-op play better than most any other game this year. Rather than giving both characters the same skill set (like most third-person shooters do), each of the two characters you play as have different skillsets: Claire Redfield and Barry Burton pack the usual array of knives, guns, and explosives, while new characters Moira Burton and Natalia Korda have limited offensive power but can search for healing items and ammo. Natalia even has a special ability that detected monsters’ presence without having to see them, which becomes invaluable when invisible monsters start showing up.

This means co-op partners actually have to work together, as one player calls out monsters’ locations while the other tries to deal with them as quickly as possible (and, in the case of those invisible ones, shoot them according to their partner’s directions). Even better, you can play the entire game alone, since you can switch between characters and use their special traits, then command the A.I.-controlled character so they won’t mess with your best-laid plans. 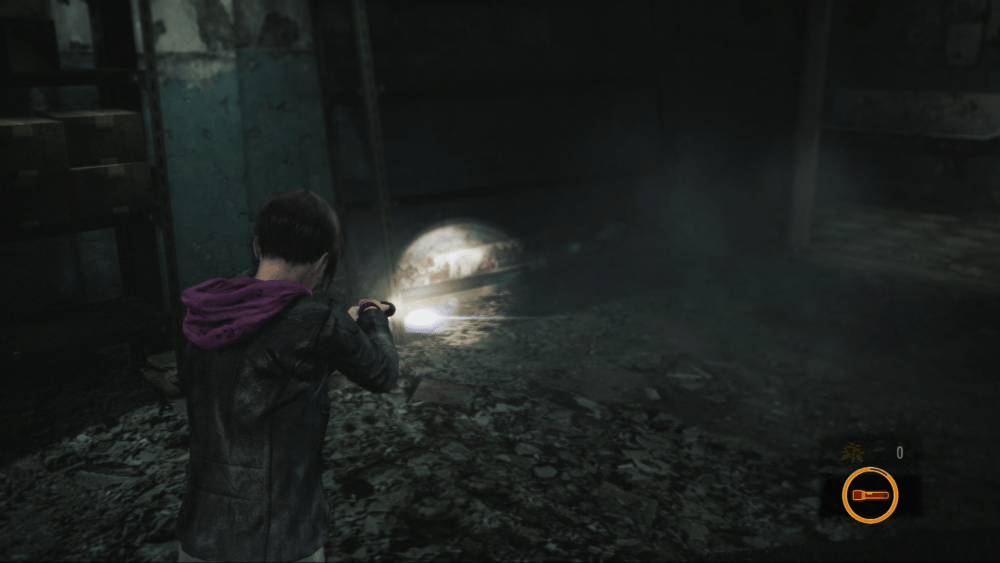 Above: Moira can hunt for hidden objects and blind enemies with her flashlight.

It also made the episode approach work like actual television episodes. Rather than release an episode as soon as it was finished and creating the month-long breaks that other episode series do, each of Revelation 2’s episodes came out within a week of each other and had two segments: one where you played as Claire and Moira, and another as Barry and Natalia. These two segments are their own campaigns, and by managing two separate inventories, Revelations 2 creates a sense of deprivation similar to the one I felt in earlier Resident Evil games before Resident Evil 4 moved the series in an action-oriented direction.

The differences between the two groups of characters also become more pronounced later. Claire and Moira are abducted and taken to the Revelations 2’s main island, so they start with fewer resources. But Barry starts with a ton of ammunition and healing items. Mid-game, the tables turn, as Barry starts running out of ammo more frequently and Claire finds more of it. Additionally, what you do as Claire and Moira, whose story happens months earlier, affects what kinds of enemies and items Barry and Natalia find. Opening certain doors or killing enemies with headshots as Claire affects what Barry finds on the island, and it was cool to know that I was helping Barry (or rather, myself) by exploring each area and being thorough with my gunshots.

But perhaps the biggest surprise Revelations 2 threw at me was having good dialogue and characters I cared about; Revelations 2 probably has the best writing of any game in the series (which admittedly isn’t saying much). A few characters’ delivery sounds clunky, but Moira in particular has some great lines of dialogue, and actor Marcella Lentz-Pope delivers them with the involved urgency the series has always been missing. Moira makes up weird curse words, complains about the ridiculous nature of some of the areas in the game, and gets grossed out by the enemies she fights. This is exactly how you’d expect someone thrown into a horrific situation to react, and how well the game portrayed her caught me off guard. The plot as a whole is still as cheesy as you’d expect from the series, but this might be the best the series has ever pulled it off.

In a year that didn’t look too bright for a series that once commanded a fervent adoration, Revelations 2 showed that Capcom still cares enough about the series to push new ideas, employ some smart design choices, and even take a second look at their scripts. As a whole, it left me with hope about the future of the series — something I hadn’t had in a while.