Dating pigeons is only the beginning.

Hatoful Boyfriend packs more under its dating sim/visual novel premise than most gamers possibly realize. In my six hours at the Saint PigeoNation’s Institute, unlocking all Hatoful’s mysteries became a meta-game quality in itself. And if you uninstall Mediatonic and Devolver Digital’s exploration of charming bestiality after one playthrough, you will miss a labyrinthine final act. I will be staying vague to avoid any major spoilers, but those wanting a pure surprise should enroll in St. PigeoNation’s before continuing. 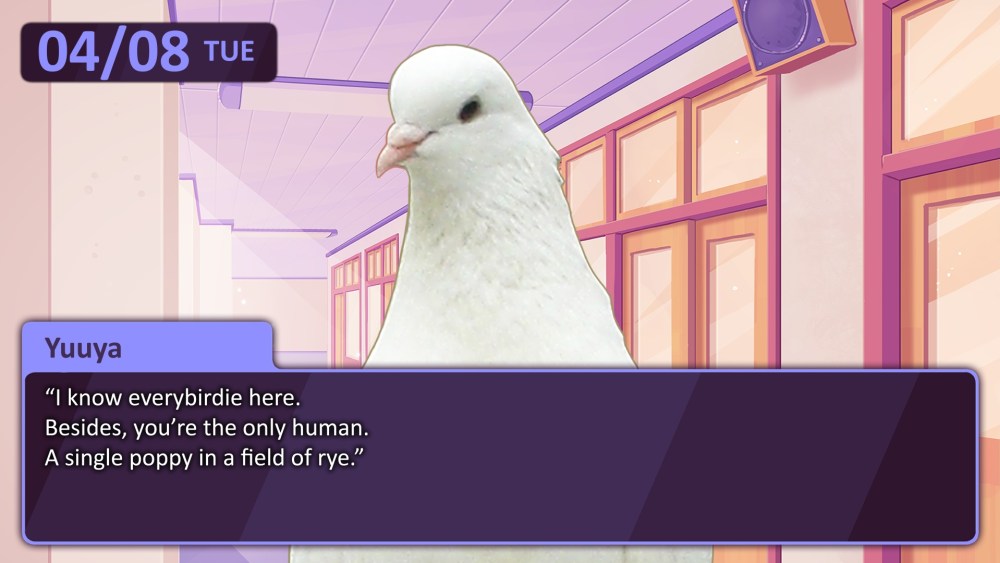 Above: Your character’s place in the world is gradually revealed the more endings you achieve.

You play as a female human transfer student at the illustrious St. PigeoNation’s high school. So what if you’re the only mammal on campus? That doesn’t stop the avian characters — from the posh student president (a fantail pigeon) to the creepy school doctor (a chukar partridge) — from being subject to your wooing and cooing. Each playthrough takes place over three terms at the school, with several holidays acting as decision points in your chosen relationship.

My first four times seducing a human-sized bird in Hatoful Boyfriend was exactly as advertised. The game parodies visual novel and romance tropes with more of an eye for ridiculousness than effective satire. Your childhood friend (a rock dove) has a backstory so cloyingly tragic it makes the works of Chekov look like an issue of People magazine. The prototypical jock (another fantail pigeon) is a hyperactive dunce obsessed with achieving enlightenment through “true pudding,” whatever that is.

But Hatoful Boyfriend is not a game you can pigeonhole. Once you complete enough of the straightforward endings, the game cracks open at the spine and displays its bizarre innards. It’s more than episodes that unlock after a playthrough. Hatoful hides a seismic tonal shift behind hours of frivolous eyelash batting. Above: Cross-dressing is a more common occurrence than you would think in a pigeon dating-sim.

I only became suspicious that there was more to this game after realizing that the protagonist lived in a cave. Her constant references to her hunter-gatherer instincts — and that she appeared to be the only human in the game world — didn’t help settle my suspicions. Hatoful keeps you curious by doling out little story paragraphs that unlock after each playthrough. Each little blurb hints at grander political and sociological schemes within this world of giant birds.

It was in my fifth playthrough that things started getting weird, even for a game in which I played matchmaker to two de-spirited bikers at a cafe. A new wish option had become available to me during Tanabata, a Japanese star festival celebrated by tying wishes to trees. Selecting this new wish began to change Hatoful from a novelty game like fellow romance sim Jurassic Heart (in which you romance a Tyrannosaurus ukelele player) into something resembling a Danganronpa visual novel thriller.

Those that keep at Hatoful Boyfriend after the gimmick wears off will experience a sense of discovery akin to what we all felt with the first-person exploration game The Stanley Parable. The different endings in Hatoful are nowhere near as convoluted as in Stanley Parable, but walking down each new unlocked path has the same — often foreboding — feeling of surprise. My sixth playthrough was four times longer than any previous one, mostly in new environments … and a wholly different genre. 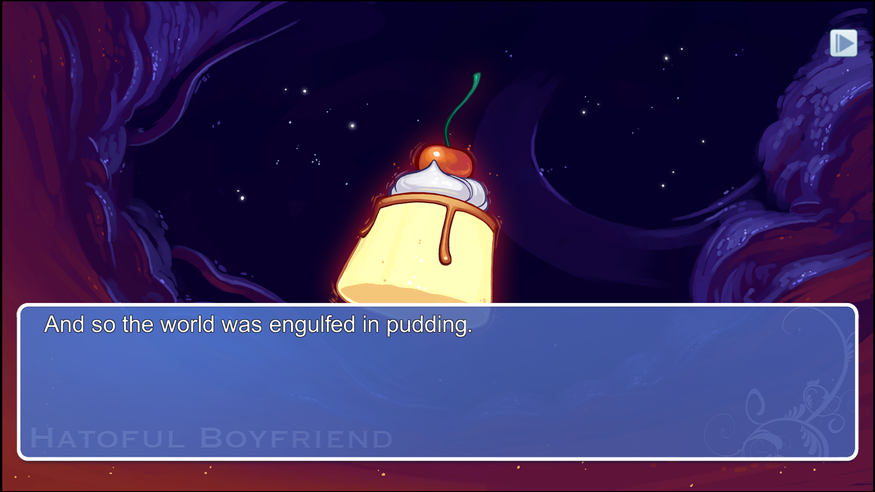 Above: Through pudding, we receive all that is good in life.

Bird love is a precursor to something much bigger and much darker. Unlocking storylines and piecing together Hatoful Boyfriend’s world was more interesting than progressing through the game itself. It took a lot of text skipping, but after discovering the mystery of St. PigeoNation’s, I believe I have achieved true pudding.