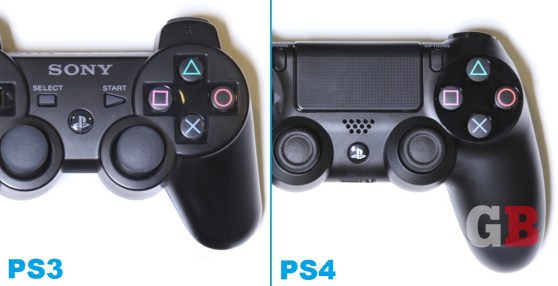 Above: Compare the size of the controller grips and the thickness of the main bodies.

When you first play with the PlayStation 4 controller, you may notice that it feels better in your hands (outside of the previously covered improvements in the analog sticks, D-pad, triggers, etc.). Sony made several tweaks to the grips for a better fit, but they’re almost easy to miss if you’re not paying close attention. “When you just look at the DualShock 4, it may not look that different,” said Aoki. “But when you hold it, it’s really different.”

The grips are longer, as you can see from the photos, and they’re slightly thicker in the back as well. “A lot of people felt that the Xbox 360 controller fits in their hands [better],” said Aoki. “With the DualShock 3, you have to hold it. With the DualShock 4, you don’t really have to hold it. It just stays in your hand. We kind of merged the good parts of the Xbox grip while still keeping that iconic PlayStation shape. ”

It’s no secret that the Japanese tend to prefer smaller gadgets — this was one of the contributing factors to their country’s reluctance to adopt the original, gargantuan Xbox and its matching joypad. Aoki doesn’t think the slightly beefier DualShock 4 will be an issue for that market. “The very first order from the management team was to keep the size dimensions. That’s the Japanese way,” he said, laughing. “But as we did the user tests, the controller became a little bigger. Since we had that data on why we needed to make it a little bigger and heavier, the management team understood. They approved. And [Japanese users during tests] didn’t think it was too big. They felt the size was fine.”

Weight, however, is another matter. [See below]

Besides the extra girth, the grips also received a textured surface on the back. It’s still plastic and not rubberized, but it’s not perfectly smooth like it’s been in the past. “The bottom side is where you sweat a lot,” said Aoki. “We made it a little more textured, so it helps keep from getting slippery after you use the controller for a while.” 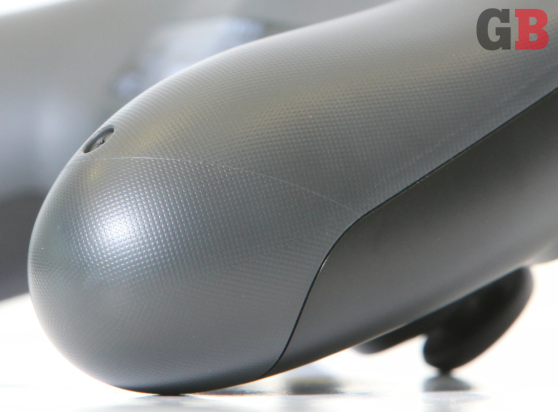 Above: The back of the grips have a microtextured surface.

From a purely visual, nonfunctional point of view, two things stick out on the DualShock 4. First, the plastic housing is two-toned instead of one consistent color throughout. The front half is a very dark, smooth gray, while the (textured) back through the bottoms of the grips are a lighter gray.

Then on the front of the controller, the two big circles that house the D-pad and face buttons are glossy black. “The buttons feel more colorful [compared to] having them on the matte,” said Aoki. 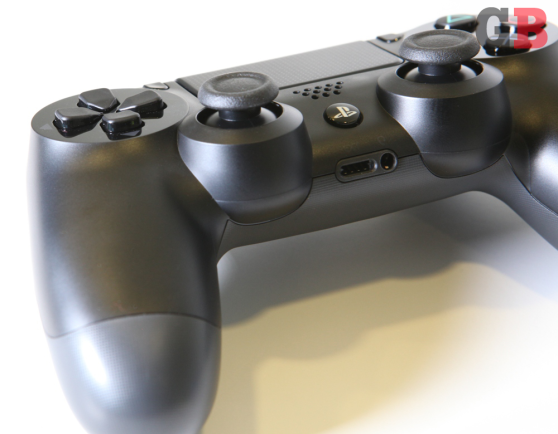 Sony is well aware that consumers consider the original PlayStation 3 controller, the rumble-less Sixaxis, to be way too light. (“It felt like a toy instead of a device,” said Aoki.) The next iteration, the DualShock 3, picked up some weight, but the DualShock 4 will be even heavier. It’s not heavy, but it definitely feels more substantial and solid. And that almost happened by accident. “The Xbox 360 controller — some people said it was too bulky, but a lot of people said that the weight felt good in their hands,” said Aoki. “We were discussing trying to add weight, which is not something Sony really does. We always go for smaller and lighter. But that was more at the end of our to-do list, because we needed to fix everything else first. After we’d fixed the design and all the features, it became heavier than the DualShock 3. We had more stuff in it. We were thinking about adding weight on top of this, but in the end, it already had a weight that was pretty good.”

According to Aoki, tests in Europe and the U.S. show that users find the DualShock 4’s weight to be “perfect,” but he admits that the Japanese feel it’s a bit heavy. “They’re used to the DualShock 3. There aren’t many Xboxes around in Japan, so people are used to this weight. So, sorry, Japanese people!” he said, laughing.

Killzone: Shadow Fall’s ter Heide agrees with his fellow European gamers. “It’s probably the best controller I’ve had in my hands,” he said. “It’s more responsive and more like a natural extension of myself, which is ultimately what you want in a controller. The thing I like most about it is kind of intangible or difficult to quantify, but it’s that build quality. It has just the right weight. It’s really difficult to nail that, but it just feels right. Of course, this is me working at Sony, so I would be saying that about the controller, but I really do think so.”

Don’t be a bad human being! Catch up on the rest of this exclusive series: