One innocuous Tweet about the PlayStation 4 controller led to a small flurry of replies, which in turn, led to this series of feature articles. How’s that for the power of social media?

This past June at the game-industry trade show E3 (the Electronic Entertainment Expo), Sony let the press get hands-on with its upcoming PS4 console, due out Nov. 15. In particular, this was the first time we got to try out the new controller with a first-person shooter, launch title Killzone: Shadow Fall.

This is a big deal because — and this is absolutely just a nonscientific observation of ours — gamers generally hate the PlayStation 3 joypad for shooting things. The DualShock 3 controller feels light and insubstantial, it has very loose analog sticks for moving and aiming, and the back shoulder buttons — well, they’re more squeeze balls than triggers.

So when I barely addressed these issues in fewer than 140 characters, I was surprised at the reaction. People seem really excited and hopeful for a new-and-improved DualShock controller. And except for those whose hands are now permanently time-, heat-, and pressure-molded to only fit the Xbox 360 joypad comfortably, they won’t be disappointed.

In part two of this series, we take a look at the improvements that Sony has made to the two analog sticks (shooter fans are going to love the changes) and the D-pad (which went through a lot more testing and revising than you might suspect).

Warning: You’re about to get some very detailed information, including some from several exclusive interviews. Why? Because all of these seemingly insignificant nips and tucks add up to a controller that just feels right. “Small details really do make a difference,” Shadow Fall director Steven ter Heide told GamesBeat. “Everyone notices the touchpad and the headset jack and all that sort of stuff, not necessarily the small changes that make it feel a lot better.”

The two analog control sticks may arguably be the most important components on a console input device. For most games, your thumbs rarely leave them, and without them, you literally can’t get anywhere. Here’s what’s changed. 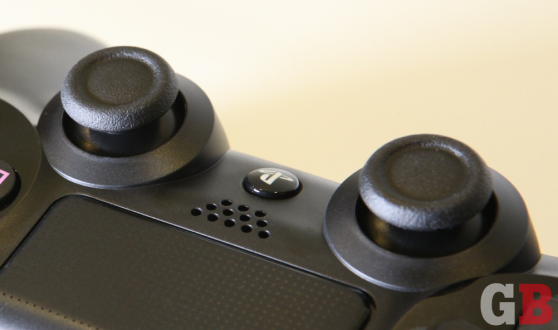 Some people prefer domed, convex pads for their analog sticks, as they provide a smoother surface to push around, especially from the edges. But it seems the overall consensus is that this shape wasn’t the best for performance. “We knew it was slippery,” said Toshimasa Aoki, the manager at SCE’s product planning department, of the DualShock 3 stick tops. “The shape never felt completely right,” said Guerrilla’s lead gameplay programmer, Tommy de Roos, who, along with ter Heide, gave input to Sony on the design of the DualShock 4.

The new tops for the PS4 are more or less concave, with a recessed center, but they’re much more nuanced than that, attempting to satisfy fans of both styles. 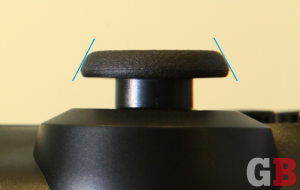 Above: You can see the flat, angled outer ridge here. This is designed for gamers who push analog sticks from the outside.

“We tried concave, fully convex, and different types of ridges,” said Aoki. “The convex, it just slips off. We knew that even if we changed the material, that would still happen. The concave one — when you have your thumb in the middle, it fits, and it’s pretty good. But in user tests, a lot of users still [pushed the stick tips from the side]. When you’re using the concave one, it kind of hurt a lot for those people [because of the sharper edge]. So the decision was to go with the ridged version.”

The DualShock 4 design for the analog stick tops enab gamers to rest their thumbs right in the middle of the pad and push in all directions without any slippage. This also allows people to push the sticks from the sides, touching a flatter surface without feeling a sharper rim. Sony even went as far as angling the outside of these ridges to maximize comfort for those thumbing things from the sides.

Sony maybe knows better than most that some gamers have dainty hands. Just look at Microsoft’s original Xbox controller to see the lack of that awareness.

On the DualShock 4, Sony lowered the heights of the analog sticks for one reason: to let those smaller digits move around to other parts of the controller more easily. More specifically, Sony didn’t want the sticks to get in the way of thumbs trying to reach the new touchpad (more on that later) that’s sitting up top.

Above: Sony lowered the analog sticks for the DualShock 4.

Driving-game and shooter developers don’t seem to agree on how stiff they want their analog sticks to be. Sony actually loosened up the DualShock 3 in response to feedback from the team behind its best-selling racing-game series. “Actually, the DualShock 2 was really stiff,” said Aoki of the old analog sticks. “DualShock 3 became really light because of the feedback from the Gran Turismo team. Since they use it for steering, if it’s too stiff, when you’re going back and forth a lot, you get tired, so they wanted to make it lighter.”

But Gran Turismo has taken a  — ahem — backseat to the Call of Dutys of the world as far as popular genres are concerned. “Now, for the shooters, especially for the right stick — [those developers] wanted more precise aiming,” said Aoki. “Also, having the dead zone smaller, it doesn’t have to be that light. After testing different types of stiffness, right in between DualShock 2 and Dual Shock3 was the best stiffness that people liked. We decided to use that.” (More on that dead zone on the next page.)