Those who aren’t fans of shooters, however, needn’t worry. Aoki and his team pinged many different developers — large and small — of different genres to get their feedback on the DualShock 4. Although he said Sony gave all the studios equal weight in this input, he did admit that some had more sway than others.

“We went out to third parties — not just Sony Worldwide Studios — about the stiffness of the sticks,” said Aoki. “We sent them three or four different types of stiffness and height on the sticks. Those third parties also had their user test teams test out which stiffness was best for their games. But of course, we list out the actual comments they give, and we always write who said what. So that might have weighted things a little, especially when Guerrilla says something specific; when Santa Monica, The God of War team, says something; or when Naughty Dog says something. But especially for the stick part, we asked the big shooter teams about that.” (Naughty Dog is the developer of The Last of Us and the Uncharted series.)

Do shorter analog sticks mean a smaller range of motion? Slightly — it’s comparable to what gamers are used to now on the DualShock 3. (“It’s still larger than the Xbox 360’s,” claims Aoki.) But trimming this down was actually intentional on Sony’s part.

“When you go all the way from right to left — if you do that continuously, it’s a pretty big thumb movement,” said Aoki. “The user tests we do are like two hours of gameplay. People commented that their thumbs and joints got fatigued. Having less motion that way, but being able to control with the same precision, was a lot better.”

Above: Pushing the analog sticks as far as they can go.

With a slightly smaller far-left-to-far-right motion in the analog sticks, Sony would have to make up for those lost degrees by packing in more data in the existing range. This means reducing the dead zone from the DualShock 3 to the DualShock 4 (to get in more information and movement), which also makes the controls a bit more sensitive.

The left and right sticks also represent the L3 and R3 buttons, respectively, and Sony has made them both easier to click for the DualShock 4. “That was feedback from the shooter teams,” said Aoki. “The DualShock 3 — when the sticks are straight, it’s easy to press them down. But it was really hard when they were angled or sideways. So we fixed that as well.”

But how many times have we inadvertently clicked in R3 in Call of Duty, knife-slashing out into empty air when we weren’t in melee range? “Yeah, accidental presses also happened with the DualShock 3,” admits Aoki. “That’s a balance [issue for us]. You can press the sticks easily now, but you don’t want accidental presses, so we don’t want to make it too easy to press.” 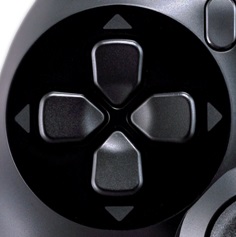 Most people probably don’t give much thought to the plus-shaped pad, using it for little more than menu navigation or some quick-select shortcut — unless your gaming sessions consist of a lot of Hadouken and Shoryukens, that is. Those fighting-game moves from the Street Fighter series require precise up-down-left-right directional joystick/joypad movement that analog sticks can’t deliver as sharply. This may seem like pretty niche use, but enough gamers care about it that Microsoft redesigned its D-pad on the 360 controller a few years back.

Most, however, still consider the PlayStation’s D-pad to be tops in the biz (as far as first-party controllers go), and surprisingly, Sony spent quite a bit of energy in attempting to improve this often-overlooked piece of plastic.

Without having the benefit of testing this on a few matches of Street Fighter IV, we can’t say if the DualShock 4’s D-pad is legitimately better or not compared to its predecessor. But we’d be surprised if it doesn’t win everyone over. You’re going to think we’re crazy, probably noticing very little different from these pictures alone, but our left thumbs fell in love on first touch.

The four sides, or “buttons” (everyone calls them that even though it’s all one piece of plastic underneath), are more pronounced. Some of this is due to the D-pad sitting atop a flat, shiny area (versus the old one nesting within a grooved surface). And some of this is due to the shape of each protrusion (more on that below). “For us, it was important that you could feel the different button presses,” said ter Heide, “that it would all make sense from a muscle memory point of view. You would immediately feel where the button was and which direction you could push it in. I think that’s something that we improved over the PS3. They have a little bit more definition to them.”

Apparently, not everyone presses on the D-pad the same. “There were two different types of people using the D-pad,” said Aoki. “There were people going around the sides, and people who [keep their thumbs] in the middle. Both were complaining that after extended gameplay, their thumbs hurt. We made a design to try to match both types of users.”

The new D-pad has a dip in the middle. The four buttons all converge into a slightly recessed, circular pit where thumbs can sit and fit more comfortably. Then, as you move from the center outward, the buttons become wider and angled higher, until they almost end in a ridge. The edges are all around sharper as well.

Above: The DualShock 4’s D-pad is deeper in the center.

To sum it up, the DualShock 4 D-pad has a deeper valley in the middle and a more concave shape overall. The net effect is a form that keeps thumbs in place and buttons that feel more distinct. We’re not sure the “people going around the sides” will like the higher edges, but Sony certainly put in the time and went beyond simple clicking around menus in its research. “Especially for the D-pad tests, we used a lot of Street Fighter, of course,” said Aoki with a smile.