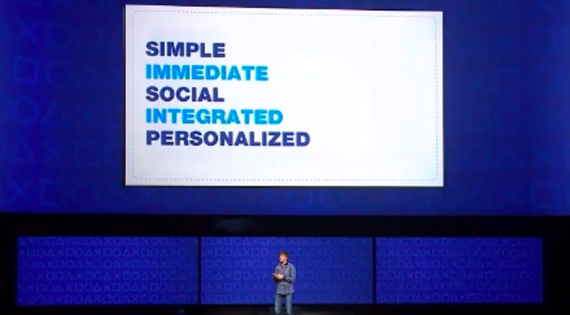 Jussi Laakkonen is the founder and CEO of Applifier.

The console war of today is no longer a battle between just Sony, Microsoft, and Nintendo. It’s expanded and is now a fight for hundreds of millions of players and tens of billions in global revenue across all screens: from smartphones and tablets to the PC and the living room. The iPad alone should blow past 200 million units sold in just three and a half years. Compare this with the PlayStation 2. It was Sony’s biggest hit, and it managed to sell 150 million units in 12 years.

Console manufactures are in a dire competition with smartphones and tablets, and Sony has clearly realized this. The PlayStation 4 announcement bedazzled the gamers and press worldwide, but not many noticed that the PS4 design principles “Simple, Immediate, Social, Integrated, and Personalized” have a common underlying theme. 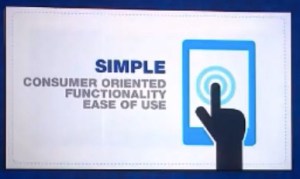 Simple: Consumer-oriented functionality, ease of use. Sony is looking to copy tablet-like user experiences. Can anything drive that point home better than using an image of a tablet at the PS4 launch event?

Immediate: PS4 brings a low-power standby state that you can resume games from and the capability to update games in the background. This is something we have had on smartphones and tablets for ages. Making games playable rapidly without waiting for the full download to complete is cool, but this is standard for mobile game, where you grab the first 50MBs of the game, get going, and it adds in content from the servers on the fly.

Social: Always-on hardware video encoding/decoding for live video streaming, a share button on the controller to share screenshots and video replays across Playstation Network, web and Facebook. Share your live video stream and spectate friends’ or celebrities’ gameplay. These are really cool features and will make playing on PlayStation 4 a lot more social. Yet you can get all of it already on mobile phones and tablets. Similar video hardware has shipped in hundreds of millions of iOS devices. My own startup, Everyplay, is powering easy video sharing for mobile players. Other mobile startups are innovating at break-neck speed to build rich social features. Once the pioneer, but now-shuttered Openfeint, provided GameFeeds similar to PS4’s planned features. Heyzap is building gamer profiles and multiplayer functions. Industry giants DeNA and Gree have both built gamer-oriented social networks. PlayStation 4 is doing the right thing bringing these features together as a platform standard, but a walled garden like the PlayStation 4 will always be playing catch-up to the innovations of an open ecosystem like iOS and Android. 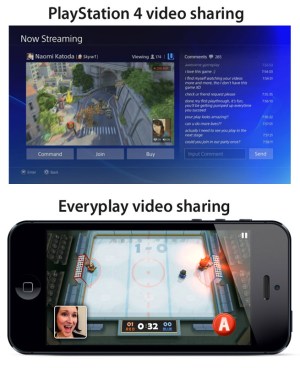 Integrated: Connecting to third-party devices and services. Watching PlayStation 4 game replays on a smartphone or on Facebook. It’s great to see Sony opening up and connecting the PlayStation to third-party services and devices like smartphones. Unfortunately, every integration will have to go through Sony’s rigorous approval process, so don’t expect rapid support for Tumblr, Pinterest, or “name your favorite new social network” here. Although a very welcome feature, this is just table stakes in 2013.

Personalized Social feeds of gameplaying, real-world identity, connect with your Facebook friends, get recommendations based on what kind of games you like and dislike. Gamers can expect a built-in “Facebook for games” focused on rich media like video streams. PlayStation 4 will have players hanging out together and talking about their gaming experiences. Mobile offerings like Mobage from DeNA, Playphone’s social platform and Gree’s platform are all attempting to build similar, fully fledged gaming networks while focused services like Facebook’s App Center for game recommendations and Everyplay for game replays provide solutions for individual gamer needs. Recommendations and social proof of what friends play will do a lot to improve discoverability in the PlayStation Store. Sony’s taken what works on social and refined it to make it their own.

Good job, Sony, but the gaming revolution isn’t being televised

I’ve worked on console, social and mobile gaming. My first console was a PlayStation 2, and I’ve got a soft spot for Sony. They get games. PlayStation 4 seems to have the performance edge over the specs leaked about the so-called Xbox 720. It’s clear from the PS4 launch that Sony is serious about getting on with the times and is looking at how people play today on mobile and bringing that experience to the PS4.

Still, the gaming revolution is not being televised. The plastic boxes sitting below TVs led the gaming industry’s growth for nearly two decades, but now the big screen is fading just as the mobile screens are exploding. While Sony may, if lucky, get to 100 million PS4 units sold in the next 10 years, I expect the tablet user base to crack a billion in less than five years as tablets replace PCs. It has taken less than six years for smartphones to blow past that magical billion units, and all signs point to tablet shipments accelerating faster than smartphones.

Sony. I like what you do. Guess we both agree that the future of gaming is in mobile.

si Laakkonen is the founder and CEO of Applifier and has spent the last few years in helping small and medium-sized game developers grow their games. As the leader of what the press dubbed “the rebel alliance,” Jussi rallied Facebook game developers together with the original cross-promotion network and grew it to reach over 150 million monthly active users. Jussi & Applifier are now focused on building authentic social discovery for mobile games with Everyplay, which lets players share their most memorable game replays with friends and fans. You’ll find him tweeting from @jussil about games and entrepreneurship.