Oculus VR, the virtual-reality startup that Facebook bought for $2 billion, has some new company. Survios, a younger VR startup that is following in the wake of Oculus, has raised $4 million in funding so that it can fulfill its dream of building the ultimate VR system with both proprietary software and off-the-shelf hardware.

The funding, coming on the heels of a $3 million round for VR startup Virtuix and a $6.8 million round for immersive-video company Jaunt, shows that virtual reality is a hot category consisting of more than just one firm. Oculus is planning to release the low-cost Rift virtual-reality goggles in the near future. Companies like Survios, which is building its own VR experience, plan to thrive within the ecosystem that the Rift is expanding.

Shasta Ventures led the funding, and Shasta partner Rob Coneybeer, an early investor in home-automation innovators Nest, will join the board at Survios. The company is also announcing other investors and advisors. Michael Chang, a former corporate development director at Electronic Arts and current managing director of Mavent Partners, is both an investor and an advisor. Other investors are Gen Isayama of World Innovation Lab and Renata Quintini of Felicis Ventures.

James Iliff, chief creative officer at Survios, said the in an interview with GamesBeat that the Facebook-Oculus deal drew a lot of attention to VR. The news of the acquisition hit right in the middle of Survios’ own funding round.

“It certainly did accelerate things and make VR a lot more mainstream,” he said. “It’s really happening. There were a lot of skeptics. Seeing [Facebook CEO] Mark Zuckerberg get involved is really validating. It helped us move things faster. It accelerated the whole industry.” 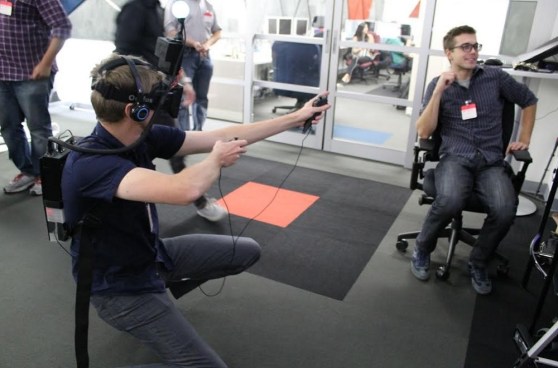 Above: A Survios demo.

Survios has similar roots to Oculus. Palmer Luckey, Oculus VR founder, was a technician in the mixed reality lab at the University of Southern California. Iliff and Survios chief executive Nathan Burba also worked in the lab and graduated from the USC game program. At USC, the Survios team was part of Project Holodeck, which tried to tackle the variety of challenges around immersive virtual reality.

But Survios is different because it is trying to build a complete system, and I believe it has some outstanding demos. It uses the Oculus VR headset, as well as the Sixense wired (and wireless in the future) controllers that allow you to control things and pick items up inside a virtual world. It also uses positional tracking from a Sony Move controller (for now, the device is awkwardly attached to the top of your head), so that you can easily turn around and see the world move in a one-to-one positional relationship with you.

Survios has also added positional audio so that you can hear the direction of things coming at you. You can wear the system on your back along with a battery pack. In prototype form, the whole setup is rather bulky, but Survios is working to make it smaller and cheaper.

On top of that, Survios is making software and games for VR. I sampled the tech in April and had a blast playing a zombie-shooting game. In that demo, you have complete 360-degree freedom. You can spin around and look up or down. The zombies come at you from all directions, and you can fire weapons at them. I did so like an actor in a John Woo action movie, where the hero fires guns in different directions at the same time. It’s a visceral, fun, and sweaty experience.

Coneybeer said, “Survios is hands down the best at what they do. The team is young, hungry, and extremely talented, and they have solved some tremendously important challenges that will enable the entire VR industry to evolve.”

Iliff said that the company is working on making that whole system better.

“This is not VR that tethers you to a desk or a couch,” he said.

Iliff is also excited about Sony’s announcement of its Project Morpheus virtual-reality headset.

“The VR headset is one piece of the puzzle, and Sony and Oculus are really tackling that challenge,” he said. “But you need others to tackle other challenges. A lot of things still have to be fully understood. We see the industry spreading out. We want to enable a whole new generation of creators to pioneer this new VR frontier. It’s still very young.”

Survios will work on both its platform and games. Iliff said that it is hard to develop good hardware without making games and vice versa.

“It’s totally about the intersection of the two,” he said. “That’s where the magic starts to happen and where we can see what the ideal user experience can really be. We believe in VR as a medium. It is one of the most exciting things ever.”

From Iliff’s point of view, Microsoft’s Kinect didn’t work out. It can’t be used to play hardcore shooting titles. But Iliff refuses to believe that mashing buttons on a controller is the only way to play.

“We think the button and body will merge together in an experience that is more satisfying,” he said. “We want you to be able to get up and move around and shoot things in different directions.”

Survios has 10 employees and it continues to hire. The company will launch a product in 2015.

“This funding will help us expand, move into a new office, and do the real work — design for manufacturability and build something rapidly,” Iliff said.