I reviewed Super Mario 3D All-Stars, and while its three games are still a joy to play, it’s easy to be disappointed that Nintendo didn’t do more with this package.

Super Mario 3D All-Stars debuts today on the Nintendo Switch. It includes remastered versions of Super Mario 64, Super Mario Sunshine, and Super Mario Galaxy. These are some of the best 3D platformers ever made. Super Mario 64 and Galaxy are two of my favorite games of all time. So, of course, I have a lot of fun playing this collection.

But I wish that Nintendo had been more ambitious. Maybe Crash Bandicoot-style remakes were never in the cards. But there’s still plenty Nintendo could have done to make these remasters (or fancy ports) more modern and exciting.

Super Mario Galaxy runs at 60fps and in widescreen in this collection. It looks great. It can also make the other two games feel sluggish by comparison.

Nintendo did put the effort in to put Super Mario Sunshine in widescreen, and it’s one of the biggest improvements you’ll see in any of the games in this collection. The extra space makes it easier to scope out Sunshine’s expansive levels. It also gives the HUD more space to occupy. In the original 4:3 version of Super Mario Sunshine, the HUD took up a huge part of the screen. That’s no longer a problem here. 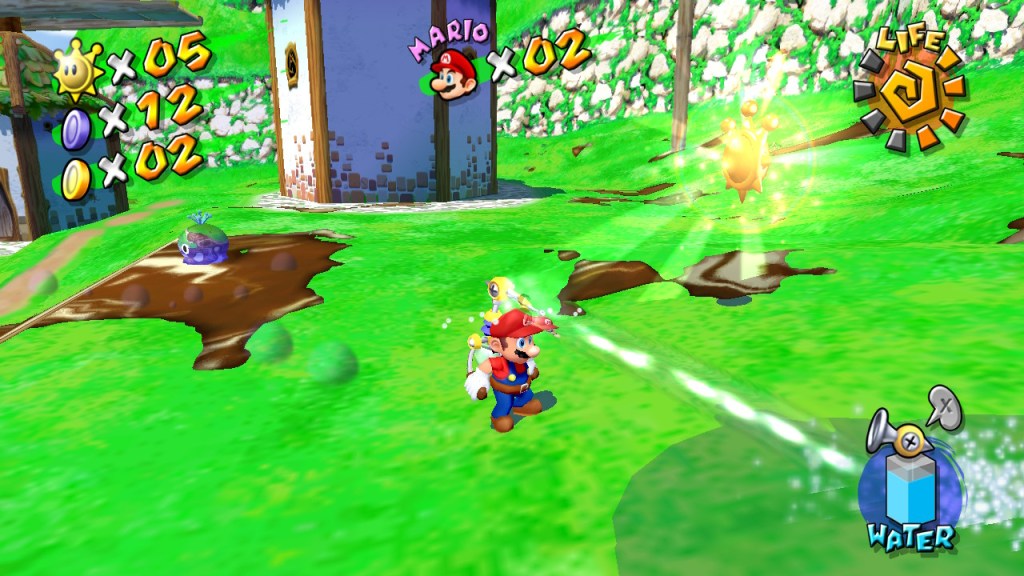 Above: The HUD is must less obtrusive than it was in the original version of Super Mario Sunshine.

Then there’s Super Mario 64, which doesn’t have widescreen nor 60fps. The 30fps in this one doesn’t bother me as much as it does in Sunshine (maybe I’m just more used to the original Super Mario 64, which I’ve played through several times). The lack of widescreen is a bummer, though. Again, it feels like something obvious that Nintendo could have done to make this new version special.

If you’re looking for ways to augment or change the way you play these games, you won’t find much. If you want to do something as simple as invert the camera controls, you’re out of luck. This is especially a problem for Super Mario 64 and Sunshine, which changes the inversion of the original camera controls.

Now, I’ll be honest: This isn’t something I noticed. I’m usually able to adapt to whatever camera scheme a game throws at me. But it can drive some people, like my colleague Jeff Grubb, wild. It’s also a shame to see a lack of accessibility options — even something as simple as a color-blind mode.

This collection is supposed to celebrate Super Mario Bros.’ 35th anniversary, but it doesn’t do anything to promote that history.

I would have loved to see Nintendo include some behind-the-scenes extras, even just a gallery of concept art from the series. Why not create some videos with interviews of Shigeru Miyamoto and some of the other Nintendo employees responsible for these games?

We’ve seen some remasters include in-game commentary in recent years. I probably shouldn’t expect Nintendo to go to that extra mile, but how fun would it have been to have a mode where you can run around Peach’s castle while hearing translated voice clips from Super Mario 64’s designers?

We got what we got

I still have a lot of fun with Super Mario 3D All-Stars. These are three amazing games. And as few as they are, the improvements are nice. The widescreen in Sunshine looks great. The updated HUD elements in all three games are a big improvement. The resolution boost makes all three games look sharper and more vibrant.

But it’s a shame that Nintendo didn’t take this opportunity to do more for their chief character’s big anniversary. Or, you know, at least include Super Mario Galaxy 2.