I love living in Ohio, but it isn’t exactly an epicenter of the gaming world. So I was surprised when my friend in Cleveland told me that a band would be playing Mega Man 3‘s soundtrack in a bar that is within walking distance of his apartment.

Not only that, but they would have someone speedrunnning the game live. The band, Bit Brigade, would provide the classic sidescroller’s music themselves as the player, Noah McCarthy, stomped his way through evil robots and Dr. Wily.

Mega Man 3 is my favorite video game of all time. I had to go to this show. It was more spectacular than I could have imagined. Bit Brigade provided faithful and high-energy metal renditions of Mega Man 3’s iconic soundtrack, and McCarthy was a skilled player that beat the game quickly and without dying. He did all of this in front of an audience while sitting 3 feet away from the band’s drums.

Starting with a Contra pun

McCarthy has known Bit Brigade’s members since they all went to college at the University of Georgia around 15 years ago. Many of them were in different bands, but they wanted to start a project called Contra Band, where they would play the soundtrack from Konami’s classic run-‘n’-gun shooter for the NES.

“Bryant, the guitarist, called me up and said, ‘Hey, you want to play Contra with a band?’ I learned Contra and we started doing it. We’ve doing different games ever since,” McCarthy told GamesBeat.

Bit Brigade has focused on NES classic, performing the soundtracks for Metroid, The Legend of Zelda, Castlevania, and Ninja Gaiden. They also did Mega Man 2.

“People have been asking us to do Mega Man 3 ever since we did Mega Man 2 for the first time, which was about 14 years ago,” McCarthy told GamesBeat. “That’s why we’re doing 3 now.”

But Bit Brigade’s performance still finds a way to sneak iconic Mega Man 2 tracks into the Mega Man 3 show. Mega Man 3 has players fighting the bosses from its predecessors about halfway through. Bit Brigade uses this opportunity to perform each boss’s stage music. 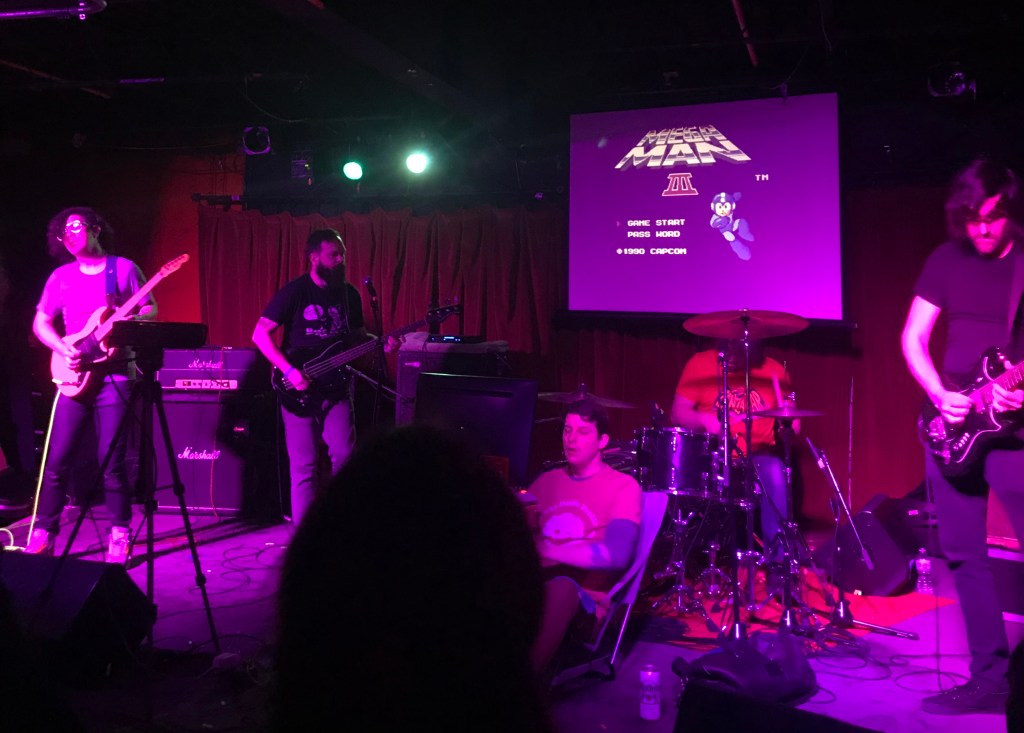 Above: Bit Brigade and Noah McCarthy performing Mega Man 3. Also, some guy’s head. Look, I’m a writer, not a photographer.

Even McCarthy’s performance of playing the game has some surprises. He’s actually playing a fan-enhanced version of Mega Man 3 that reduces the game’s notorious slowdown problems and adds some other surprises. The ROM hack’s name is Mega Man 3 Improvement.

“These awesome nerds were like, ‘Mega Man 3 is a very poorly programmed game. It has lots of graphical glitches and tons of slowdown.’ Tons! Every single stage,” McCarthy told GamesBeat. “They actually went in and fixed all that stuff, and added in sprites, unused sprites. They added the intro as well. They took the story that’s in the instruction booklet and added some graphics and things like that. But everything else is just the game, pretty straightforward, with improvements. It’s significantly more reliable for me to play.”

McCarthy isn’t speedrunning to break records. He’s part of a performance. He’ll sometimes even purposely slow down so that the band has more time to play a song.

Both elements, the speedrun and the music, created an incredible show. For a retro gamer and giant Mega Man 3 fan like me, it was a thrill.

Bit Brigade is continuing its Mega Man 3 tour around the country, and you can find dates on their website. You can also buy their albums — available digitally, on CD, and some even on vinyl — here.