The Electronic Entertainment Expo (E3) trade show is a chance for most people to catch with the biggest upcoming games. But I was most looking forward to playing something that came out back in 1994.

Mega Man: The Wily Wars is a Sega Genesis game that contains 16-bit remakes of the first three games in Capcom’s classic side-scroller series: Mega Man, Mega Man 2, and Mega Man 3. It also contains an original set of levels that you unlock once you beat the trilogy.

I love Mega Man, but I never got to play this game before. Wily Wars only had a cartridge release in Japan and Europe. In the U.S., you could only play it through the Sega Channel, an ahead-of-its time service that downloaded games through a coaxial cable.

Sega Channel was expensive and not available everywhere. I didn’t have it, and so I never played Wily Wars … until Tuesday at E3.

Wily Wars is a part of the Sega Genesis Mini‘s digital library. The micro-console is coming out on September 19, and I played it at Sega’s E3 booth.

I could play the entire library, but I went straight for Wily Wars. It was a surreal experience. I had wanted to try this game forever. Sure, I could have caved in and downloaded a ROM off the internet, but I was stubborn. I held on to hope that it would someday be easily and officially accessible.

That day is here. 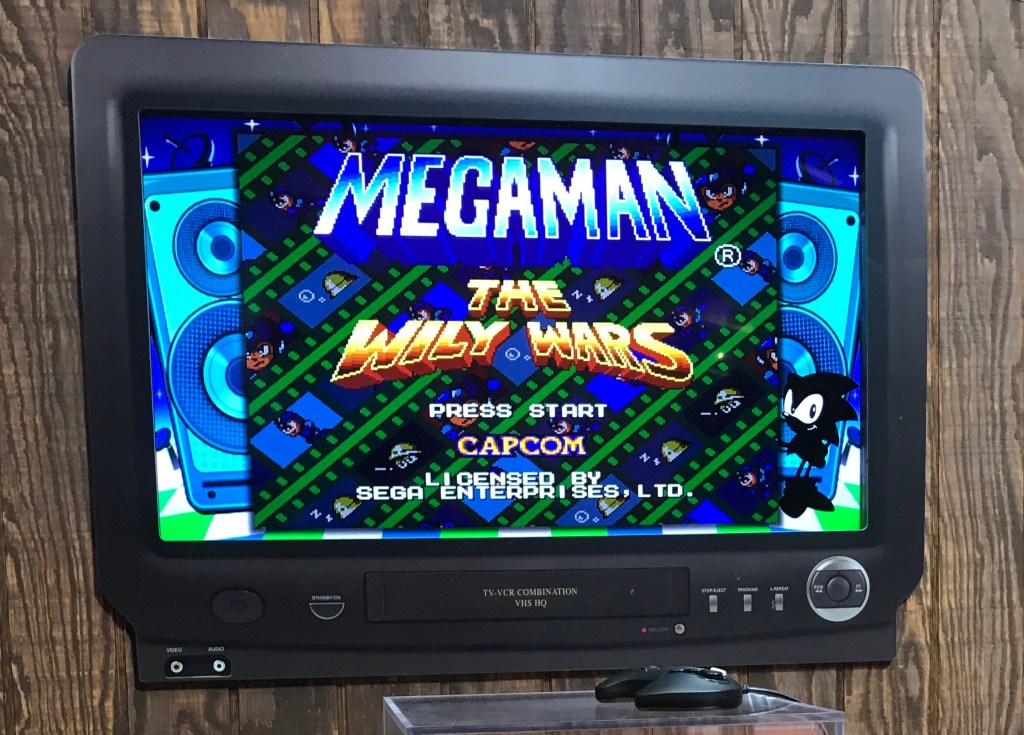 Above: Playing the Genesis Mini at E3.

I went right into my favorite Mega Man game (and favorite game of all time, really), Mega Man 3, and headed straight to its best stage: Snake Man. I have gone through level about 100 times before. Suddenly, it felt almost new again. The layout was the same, but the visuals were different. It wasn’t just that it went from 8-bit to 16-bit. It all had a distinct Genesis feel to it. It’s hard to explain, but it’s that kind of retro look you’d rarely confuse for a Super Nintendo game. This certainly didn’t look like Mega Man 7 or Mega Man X, for example.

It was thrilling. I got to experience one of my favorite levels in gaming from a new perspective. It was great even if it also felt a little, well, weird. Mega Man himself controls a bit differently than he does in the original. It was harder, for example, to tap on the D-pad inch my forward or backward. On the NES, a single tap would move you a decent bit. Here, a tap would barely nudge Mega Man. It’s something I think I’ll get used to with time.

It was great to see Snake Man’s level with more details. In the original, it just looked like some kind of indoors … something. It was green, I know that. Wily Wars gives the stage more character with background details like broken wire fences and other flourishes that make the level feel more industrial

Even just playing a Mega Man game with a Genesis controller felt novel. The Blue Bomber has been a part of so many consoles, it always seemed bizarre that he had such a small presence on one the greatest machines for 2D games ever. It sounds like such a goofy thing, but just using that chunky, black, three button Genesis controller to move Mega Man made me smile.

I’m excited to get my own Genesis Mini so I can play through all three remakes and the extra campaign. I’ve waited patiently for about 25 years, and soon I’ll actually own Mega Man: The Wily Wars. That’s as exciting to me as any of the big announcements from this year’s E3.

Well, maybe except for The Legend of Zelda: Breath of the Wild 2. That’s pretty freaking exciting.