Today, the original Mortal Kombat games’ use of live actors in front of a green screen may look … well, a bit quaint. But back in the early ’90s, Mortal Kombat was one of the most realistic games we had have ever seen.

In 2018, its look has charm that nothing modern can capture. The series has long abandoned the green screen for 3D models, but that aesthetic is coming back.

Super Combat Fighter is an indie game that’s trying to secure crowdfunding on Kickstarter. It looks a lot like Mortal Kombat, in large part to its use of live action actors against a green screen. Beyond its graphics, the project taps into Mortal Kombat nostalgia. It uses character designs (ninjas!) and controls that follow the groundwork laid out by the franchise’s original games.

But even after all these years and so many technological advancements, it isn’t easy to make a fighting game with live action actors.

“It was actually surprising how complicated it was to figure out the nuances of green screen,” Super Combat Fighter’s creative director Richard James Cook told GamesBeat. “It’s crazy to me, because it’s something we see used everyday in video media … but when you actually try to work it yourself, you find out very quickly the number of factors that need accounted for to get it right for post-production.

“A lot of the ground level stuff has to do with getting the lighting right so there’s almost no shadows, making sure your subject is far enough away from the screen or sheet that they don’t have light ‘spill’ onto their skin — which makes the actual keying part a nightmare if it happens and you don’t catch it until post. Just so much trial and error across the board when shooting — down to making sure you shoot at a fast enough frame rate, so as not to generate motion blur – which also makes the keying process frustrating as hell.”

Cook has mostly worked as a 3D modeler in the gaming industry. For Super Combat Fighter, he is teaming up with developer Headless Chicken Games. The Costa Rica-based studio has worked on regional mobile games like Mundi Nuggets and Ciudad Kolbi. It has also worked with VR on Quar: Infernal Machines for PSVR. Now Cook and Headless Chicken Games have to help bring back a look many of us associate with mall arcades in ’90s.

“It still boggles my mind that such a seemingly simple technology that’s been around for so long is practically an art to be perfected,” Cook continued. 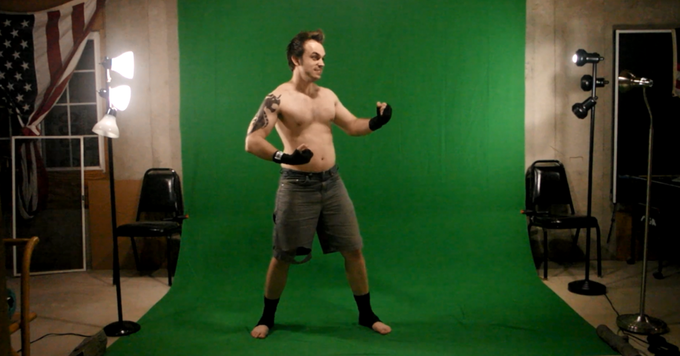 The process isn’t easy, but the results are impressive. The trailer for Super Combat Fighter does look like some kind of lost ’90s fighter. Heck, it looks like a Mortal Kombat clone made shortly after the original released, hoping to capitalize on its success. And I mean that in the best way possible.

The Kickstarter campaign is asking for $35,000 by October 13. As of the time of writing this story, it has earned about $11,600. It has a ways to go before it can reach it goal, but success is well within reach.

We’ve seen retro games like Shovel Knight nod at Mega Man and Castlevania. We’ve had plenty of indie games take on the Metroidvania genre, including recent successes like The Messenger and Dead Cells. I love 2D platformers as much as everyone, but the idea of a new game that captures the spirit of original Mortal Kombat is exciting. And more than mechanics or violence, that means reviving the pure joy that Mortal Kombat delivered.

“I think making sure it’s connected to something they remember as more fun than complicated is important,” Cook told GamesBeat.