I started my 2019 gaming by finally tackling a Japanese role-playing game I’ve wanted to play for some time: Phantasy Star IV: End of the Millennium.

I love JPRGs, but I spent a little time in 2018 on them. The two I was looking forward to — Ni no Kuni II and Octopath Traveler — both ended up disappointing me. While Dragon Quest XI did come out in 2018 to strong reviews, I’ve never been able to get into that series (although I do hope to eventually give Dragon Quest XI a try).

But I also didn’t spend any time in 2018 going back and playing classic JRPGs that I missed. This was something I did a lot of in 2016 and 2017, playing through gems like Suikoden/Suikoden II and The Legend of Heroes: Trails in the Sky.

Of course, I played those games on the Vita, which spoiled me. I’m now too comfortable playing JRPGs on a portable machine (usually in bed). And when the Switch came out, that became my bedtime system of choice. I know, there’s no logical reason why the Switch’s existence should suddenly make my Vita and 3DS obsolete. I was mostly using them to play JRPGs that were older than the systems themselves anyway. I love my Switch, and I find myself playing it every night. My Vita and 3DS, meanwhile, collect dust in my nightstand drawer.

I spend most of 2018 playing 2D side-scrollers for Switch, excellent games like Bloodstained: Curse of the Moon, The Messenger, Celeste, and Mega Man 11. But I miss JRPGs. So when 2019 started, I made a little gaming-themed resolution to myself: I would get back to working through my JRPG pile of shame.

Unfortunately, the Switch doesn’t have that many JRPGs on it yet. This will likely change with development of 3DS games slowing down this year. Sega Genesis Classics, meanwhile, came out for Switch on December 7. It’s a collection of some of the best games that ever came out Sega’s 16-bit console, and it includes the three Genesis entries in the Phantasy Star franchise. Sega Genesis Classics has been available on PS4, Xbox One, and PC, but having it on the Switch makes the collection much more convenient. 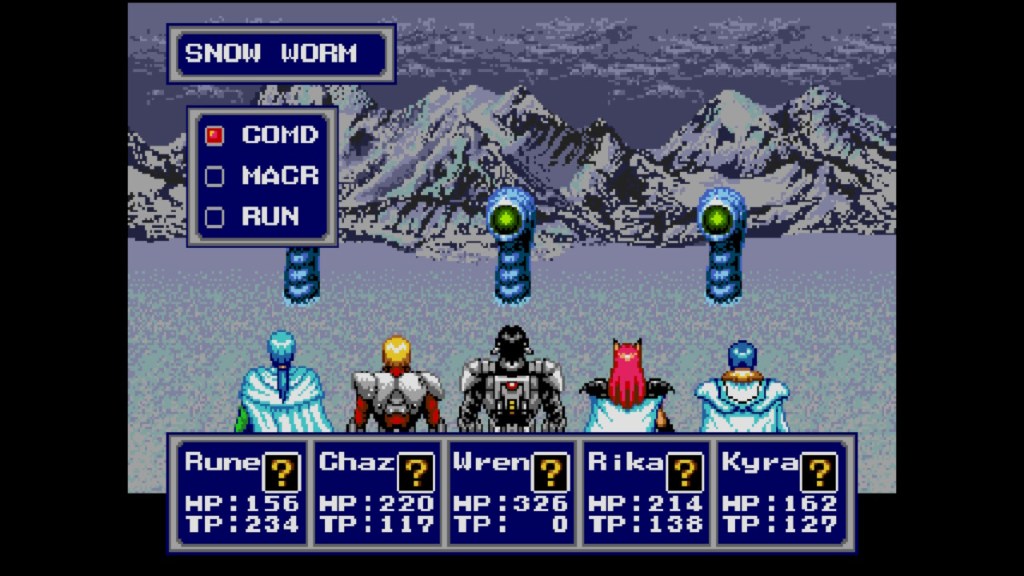 Above: A battle in Phantasy Star IV.

My past experience with Phantasy Star came from Phantasy Star Online, a cooperative multiplayer online action role-playing game for the Sega Dreamcast. I loved this game, as it was one of the first times I played with others in online co-op on a console.

Phantasy Star IV is everything I needed. It’s a classic JRPG. You run around from town to town, fighting monsters in random battles with turn-based combat. It’s simple in a lot of ways, and that’s exactly what I wanted. It’s not dull. While most 16-bit JRPGs have fantasy and medieval settings, Phantasy Star has a sci-fi aesthetic. This helps it stand out, and flying a spaceship to multiple planets gives an epic feel to this JRPG’s scope.

I was also surprised by some of the game’s more complex systems. You can actually create macros for your party, which is an impressive feature for such an old RPG. This means that you can use a menu to set up what actions you want your party members to do in a single turn. So you can set up Macro A so that everyone just attacks. Then, when you’re in a battle, you just select Macro A from the menu instead of having to manually go through every character and order them to attack.

Phantasy Star IV also has a fast, enjoyable pace. Many modern JRPGs can feel slow and heavy on exposition. Phantasy Star IV gets to the action quickly, and you’re always moving from one dungeon, town, or boss to another. 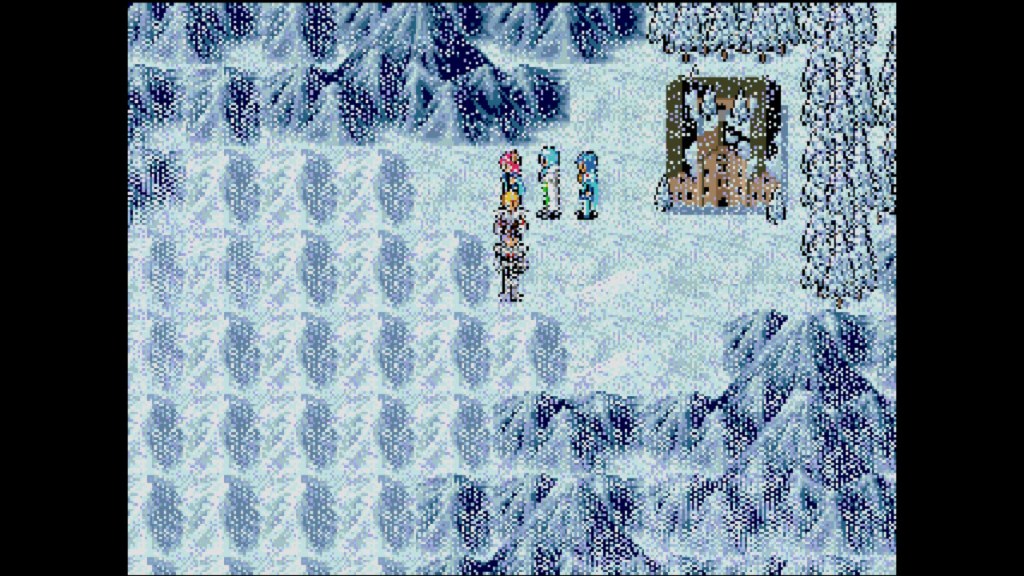 Above: JPRGs just aren’t the same without a world map to explore.

Sega Genesis Collection also adds some features to the game that makes it a more convenient experience. You can use the Switch’s shoulder buttons to fast forward or rewind time. Fast-forwarding makes battles and walking a lot faster and less tedious. Rewinding also saved me some headaches. I didn’t want to rewind after the simplest of mistakes (aka cheat), but sometimes I would do something stupid on accident. Here’s one example: I was once near the end of the dungeon and accidentally teleported my party to its entrance when I meant to just heal someone. Being able to rewind past that mistake saved me a lot of time and frustration.

You can also create and load a quick slave slot anywhere thanks to the Sega Genesis Collection. Dungeons in Phantasy Star IV can be long with no places to save your game in a normal way, so you could die to a boss and lose a lot of progress and time. Quick saves make it so that you can restore your progress to right before that big boss battle.

And since I’m playing on a Switch, I also have the convenience to put the game in sleep mode at any time or to dock my system if I want to play on my TV.

Phantasy Star IV does have its faults. The English translation is spotty. Characters speak in a rigid, unrealistic way, as if the localizer’s first language wasn’t English. Just look at this line below. I inspected a fire-lit brazier, which had the main character, Chaz, comment on it. An alien member of my party, a Dezolian and a local of the planet I was on, responded with “The Dezolians believe in fire!” 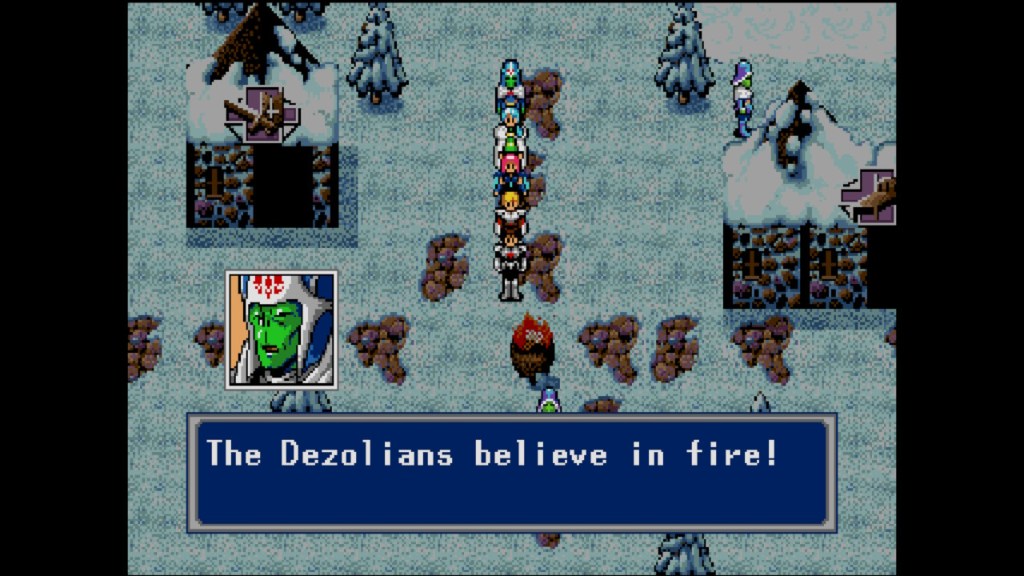 Is … is it an option to not believe in fire? I’m sure that the original line in Japanese meant something like “The Dezolians worship fire.” Probably.

The game also doesn’t have much to do aside from the main quest. There is one series of sidequests that you can get from a hunter’s guild in one town, and that’s it.

I beat Phantasy Star IV, and so can you

But those problems did not detract much from my enjoyment. Heck, the goofy translation was almost charming. And the lack of extra activities helped Phantasy Star IV’s pace. Again, this is a pretty breezy JPRG. The whole thing only took me about 15 hours to beat, which pretty short in JRPG land. Now, that is with all the fast-forwarding I was doing to make battles and traversal faster. Still, this is not some 100 hour commitment like many JRPGs can be.

So, if like me, you’re looking for classic JRPG experience on the Switch, I recommend you get Sega Genesis Collection and play through Phantasy Star IV yourself.