Sega has been making a lot of retro gaming announcements. It’s going to start releasing old Genesis and Master System games like Sonic the Hedgehog and Alex Kidd on the Switch as digital downloads. Shenmue and Shenmue II are coming to modern platforms. And Sega is working on a new mini-version of the Genesis. All of that is great, but where’s the love for the Sega Saturn?

Yeah, yeah, the Genesis is one of the best systems ever. And the Dreamcast has a legion of fans. But the Saturn is also a fantastic system. I’d love to see more Saturn games become available as digital downloads on modern systems, because it has a library of classics that are hard to access unless you own the console and the original discs.

Besides, the Genesis library has seen plenty of love. I think I can play the original Sonic the Hedgehog on my microwave now. And a lot of the Dreamcast’s best games, such as Jet Set Radio and Crazy Taxi, are now available on Steam.

But ports of Saturn games are rarer. The last major one was Nights into Dreams for PlayStation 3 and Xbox 360 in 2012. What about some of the console’s other classics? I’d love to have Panzer Dragoon and Panzer Dragoon II Zwei on my PlayStation 4, Xbox One, or Switch. These rail shooters are beautiful, kind of like more dreamy takes on Star Fox. 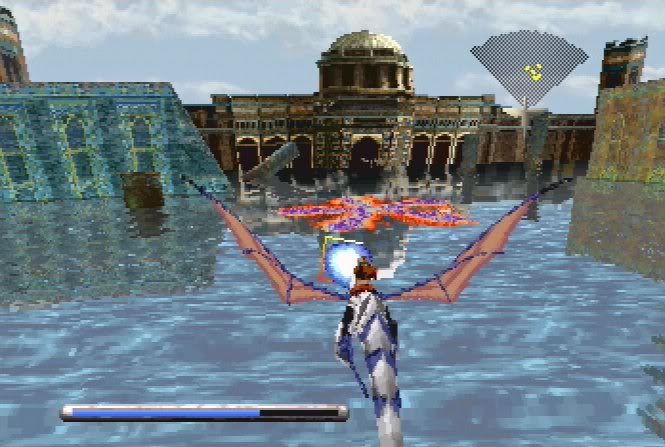 Above: It’s primitive, but it’s beautiful.

I saw a lot of my friends on Twitter and at work get excited that Panzer Dragoon Orta, the one that came out for original Xbox, is now backward-compatible on the Xbox One. It’s a beloved series, even if we haven’t had a new game in almost two decades.

And while we’re talking about Panzer Dragoon, how have we not seen Panzer Dragoon Saga ported to any other systems yet? That RPG spinoff came out in the later days of the Saturn’s life. It’s fantastic, but it’s also rare. If you want to buy it used now, you’re paying more than $400 for it. This is an incredible RPG that most people have never had the chance to play. Why not make it more accessible?

Aside from Panzer Dragoon, the Saturn has plenty of other games begging for new releases. You have the 2D action side-scroller Astal, which has gorgeous, hand-drawn graphics. The Clockwork Knight games are creative 2D platformers that did the whole Toy Story thing a bit before Toy Story actually released.

And let’s not forget Burning Rangers, a game about firefighters … in space! It also has one of the greatest theme songs of all time.

Man, that sax gets me pumped up every time I hear it. Come on, how many of you have really played Burning Rangers? Wouldn’t that be more interesting than playing Altered Beast for the hundredth time?

Look, I get it. The Saturn was not a big success when it came out in the U.S. in 1995. But neither was the Dreamcast! And you all never shut up about that thing. I do understand. It’s failure is a bit more tragic and romantic, since it signaled the end of Sega’s hardware-making days. And, OK, maybe the Dreamcast is just a bit better than the Saturn. I do love me my Samba de Amigo.

But let’s not forsake the Saturn. Its great library shouldn’t only be accessible via second-hand game stores.