Sonic Mania was one of my favorite games of 2017. I love Sonic’s 2D classics from the Sega Genesis era, so I was delighted to have a new game with that same style.

Now, Sonic Mania Plus is coming to as a standalone release and as a digital upgrade for the original. It adds two new characters (Ray the Flying Squirrel and Mighty the Armadillo) and Encore Mode, a new twist on the original campaign with remixed stages and more. It comes out on July 17 for PlayStation 4, Xbox One, Switch, and PC.

I’ve been playing an early copy of the Switch version. Sonic Manis Plus does, in fact, “plus” the experience. It gives you an excuse to go back to the fantastic side-scroller and play through it again … and again … and again.

The original release of Sonic Mania included Sonic, Tails, and Knuckles as playable characters. Now we get access to Mighty the Armadillo and Ray the Flying Squirrel.

This is Mighty’s first playable appearance since 1995’s Knuckles’ Chaotic for the 32X. Each character in Sonic Mania has a special ability. Tails can fly short distances, for example, while Knuckles can glide and climb walls. Mighty can do a ground pound if he’s in the air. It gives him a lot of vertical speed and helps you attack enemies on the ground with more precision.

Ray is playable for the first time ever in a traditional Sonic game. He debuted, along with Mighty, in SegaSonic the Hedgehog, a three-player arcade game that only came out in Japan in 1993. That title had players control characters with a trackball.

Like Tails, Ray can fly, but his mechanics work differently. Think of Ray’s flight kind of like how Mario’s cape works in Super Mario World. Moving against your momentum gives you lift but slows you down, while moving forward has you quickly diving. You need to alternate between the two to maintain speed and height.

Playing as both of these characters give you a new way to appreciate Sonic Mania. The new abilities open up different strategies for getting through levels and fighting bosses. And they both just look so cool. The sprites and animations are expressive and full of character.

If you love Sonic Mania, it’s worth playing through it again as each of these new heroes. 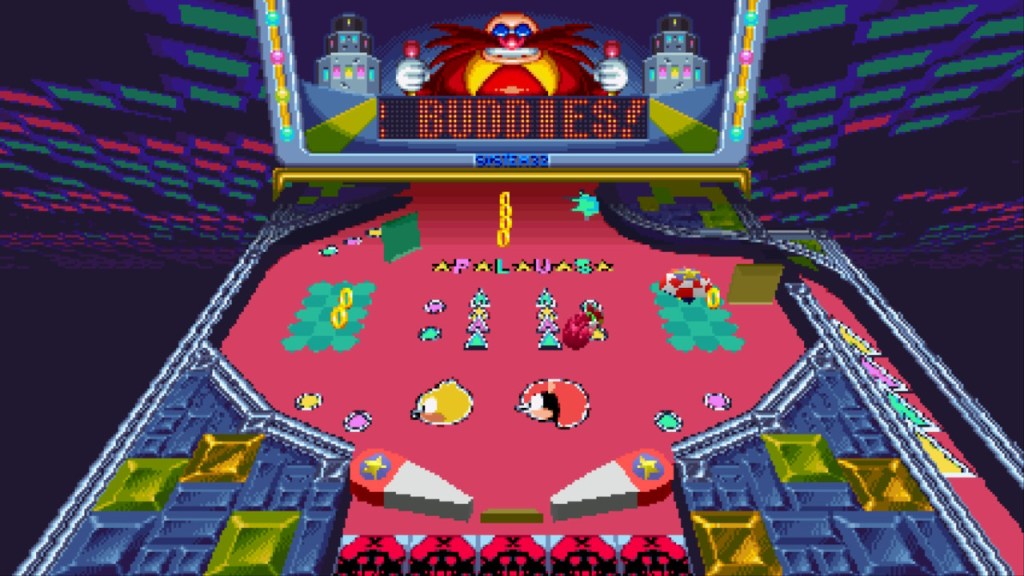 But you don’t have to just play the regular campaign. Encore Mode gives you a new way to experience Sonic Mania. You go through remixed versions of the original levels. This just means that some of colors and layout has changed. It’s not a huge thing you’ll notice.

But Encore Mode has a unique way of handling your lives. Instead of having a bank, you can instead collect all of the five playable characters. You can control one of them while the other follows, and you can switch between the two with the press of a button. The other three wait to jump in if you die. You only lose if you run out of characters.

Instead of bonus stages that award you Chaos Emeralds, you unlock a new pinball-like minigame if you have at least 50 rings and reach a checkpoint. This is where you can replenish your supply of characters though a crane game (another callback to Knuckles’ Chaotix) inside the pinball machine.

Encore Mode gives you a way to play as every character in a single playthrough. It makes the experience feel more spontaneous and fresh.

Sonic Mania Plus gives me a reason to keep playing this fantastic game, which I’m grateful for. Now I wonder what this team is up to next. Many of Sonic Mania’s levels are new versions of stages from past games, but its best zones were the new ones like Press Garden and Studiopolis.

I’d love to see a Sonic Mania 2 that focuses entirely on new levels. But until then, I’m happy to keep playing Sonic Mania Plus.