Scary movie makers like to juxtapose beauty and horror. That’s a good way to describe the beginning of Resident Evil 7: Biohazard, the new video game from Capcom that debuts today on consoles and PC.

Ethan Winters, the protagonist, views a video message from his beautiful girlfriend Mia. She’s happy and can’t wait to get back to him. Then he views a second video, and she’s afraid and warns him not come looking for her. So begins a game that takes the Resident Evil series back to its roots in horror. It gives you a mounting sense of dread, in contrast to over-the-top gore and violence in other horror titles such as The Evil Within.

Winters believes he can find Mia in the bayou of Louisiana. Her trail leads him to an abandoned house in a fictional place called Dulvey. Winters drives through the woods where the sunshine beams through the trees. (Check out the description of RE7 from Jason Wilson, GamesBeat managing editor). 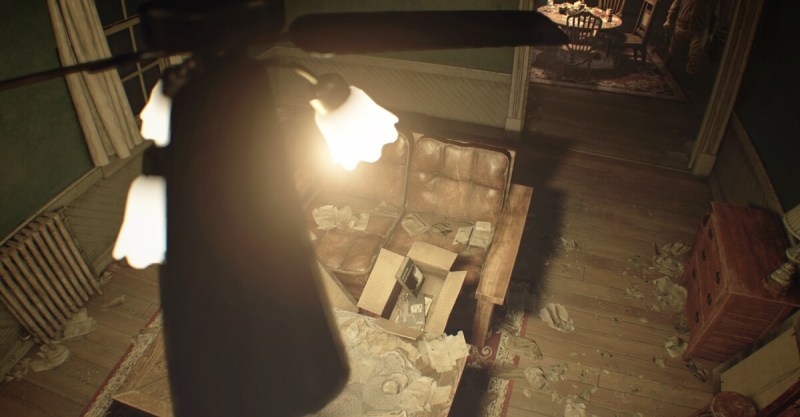 Above: Light and shadow in Resident Evil 7: Biohazard.

It’s pretty, and that’s our clue that we’re not going to be on a picnic as Winters approaches an old mansion. The main entrance is blocked. Around the corner is an abandoned van. A message, written in blood on the back of a paper, says, “Join us.” Another message, again in blood, says, “Accept her gift.” We face a little jump scare from some crows. But this is nothing compared to what comes later.

Winters finds a guest house and enters it. But from the very start, the place is pitch dark. I went inside and then walked right back out, hoping I would find another clue or entrance first. Then I went back into the dark. I stayed there for a bit until Winters turned on his flashlight. But of course, the flashlight doesn’t illuminate the entire room. It only pushes back the darkness just a little bit.

As Winters, I explored the house and discovered a variety of objects. There are huge roaches and unappetizing things all over the decaying home, which seems to be dying of some kind of disease. The house is empty, but you expect to find a horror waiting around every corner. The tension mounts.

Then you find a videotape. You shove it in the VCR and watch it. And it certainly isn’t comforting. But in search of Mia, you have to soldier on into the darkness and face your fear. Oddly enough, as you explore the abandoned home, you come across lots of lit lamps that cast more shadows. 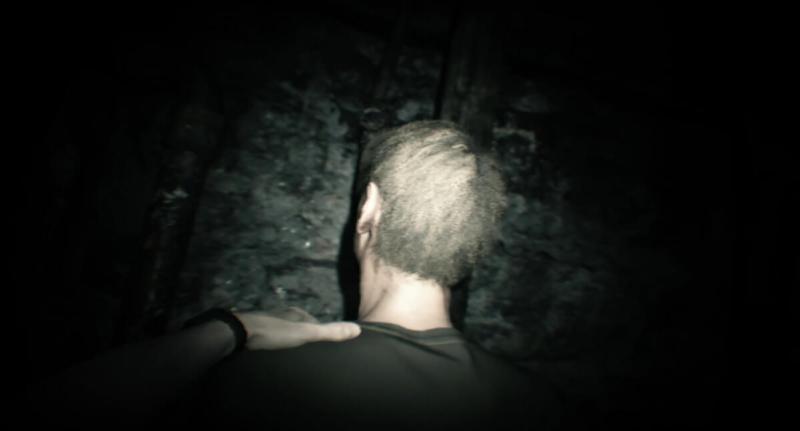 Above: Hey there, fellow, how are you doing?

Then you go into what can only be described as a dungeon. There, you find Mia and your worst nightmares. The pace picks up, and you have to act.

“You need both lows and highs because horror has a lot to do with not knowing what to expect,” said Masachika Kawata, the producer of the game, in an email. “If a player becomes too used to a slow pace or too used to action, they can become desensitized and there’s less impact from what’s happening.”

I’ll let you judge how well Capcom does at keeping you on the edge of horror in the first 30 minutes of the game. I’ve captured my own gameplay on video.

Here’s the first part of the beginning, ending in a nice jump scare.

And here’s the second part of the beginning, where the blood starts to flow.