Ten years ago, a small developer in Eugene, Oregon — Buzz Monkey Software — started making a South Park game for PlayStation 2 and Xbox. That game never made it through development, and we glimpsed it in action for the first time this weekend, via footage from an recently discovered Xbox development kit.

Marshall Gause — now president of educational developer Thought Cycle — took a job as a senior designer on that South Park project back in 2005, a few months into the game’s development cycle. He was helping to reboot the troubled and “overly ambitious” project, but just three weeks after Gause started work on South Park, its development stopped forever.

We’re left with mere glimpses of the open-world action game that might have been, and it’s a great lesson in the harsh realities of video game development.

When Gause applied to join Buzz Monkey Software, it was a serendipitous move.

“I remember applying to the ad they had that said, ‘Must be able to work on games with offensive content,’” said Gause. “I wrote in my cover letter that I’m used to that — I worked on a bunch of South Park games. They said, ‘We should talk.’”

Gause had actually worked on the first ever South Park game — Acclaim Entertainment’s 1998 first-person shooter for the Nintendo 64, based on the Turok game engine. He also helped create South Park: Chef’s Luv Shack, a quiz show fused with mini-games that released on Sega Dreamcast, PlayStation, Nintendo 64, and PC in 1999. “It was a Golden Globe winner, for sure,” jokes Gause. “The highest quality you could get out in the market in five months.”

Acclaim went out of business a few years later, and Ubisoft picked up the South Park licence, explained Gause. It enlisted Buzz Monkey Software to make a South Park equivalent of the well-received action game The Simpsons Hit & Run. But development wasn’t all that straightforward. 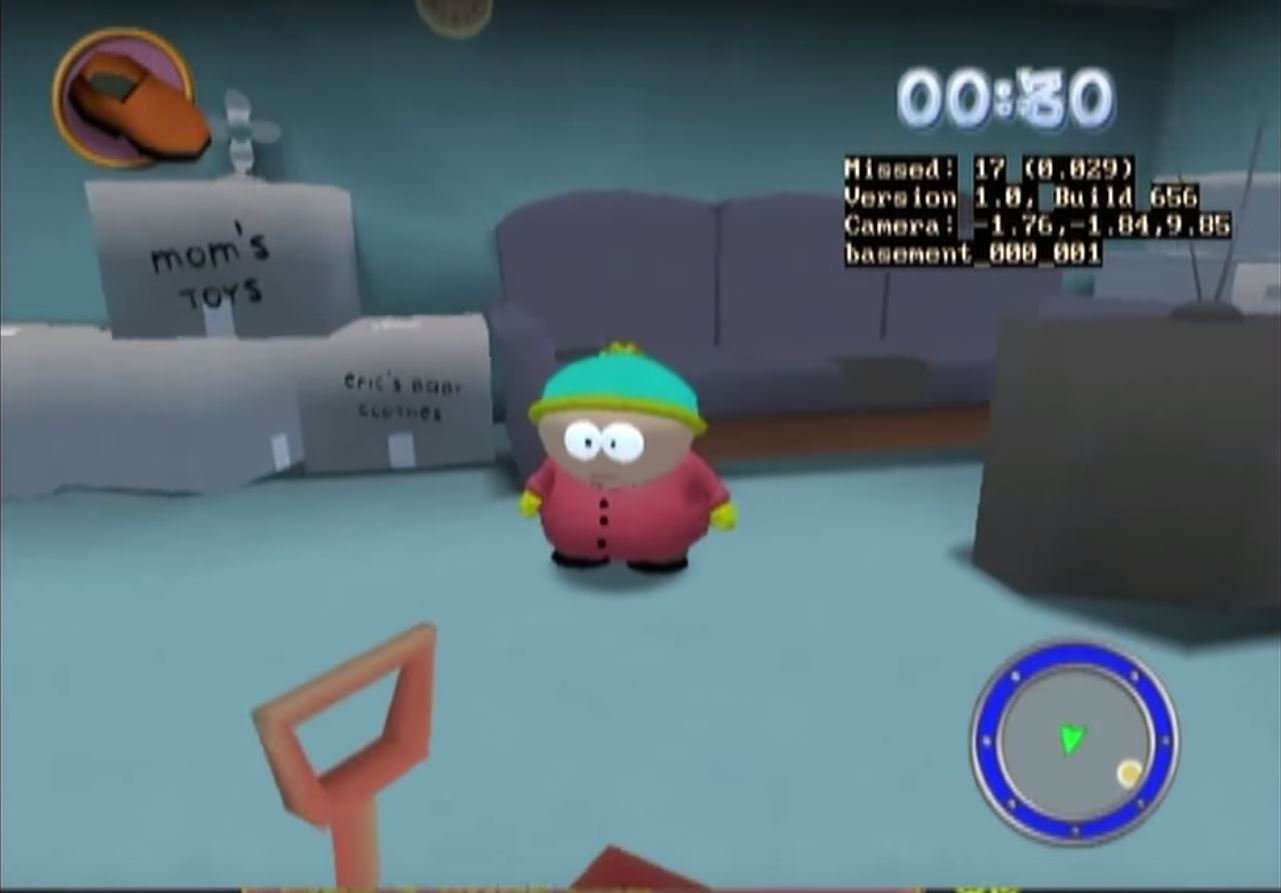 Above: Inside Cartman’s house.

All things to all people

By the time Gause joined Buzz Monkey, the South Park project had gotten out of hand.

“It was overly ambitious,” he said. “It had platforming, it had combat, cars, and it kind of suffered from an external publisher that was all over the place in terms of what he wanted.

“I think ultimately the publisher really didn’t know what they wanted it to be, and we kind of suffered from having an overactive, over-involved producer. He used to call people late at night and bug them about things and was constantly coming up with new brainstorms. I think he was trying to please several masters.”

Gause was part of a move to redesign the game, including a refocus on the single player experience over a largely superfluous multiplayer mode. That included shifting the gameplay to an intriguing flock system where you controlled all the main characters — Kyle, Cartman, Stan, and Kenny — as a group, switching between them as necessary.

“The design reset we started working on was that we were going to emphasize single player and this horde control system where you move them all as a unit. They had formations they could do and individual abilities. Sort of a free-world tactical action game.”

As for the inclusion of multiplayer, “it went back and forth,” says Gause. “By the time I got on the project, there was less of an emphasis on the multiplayer.” 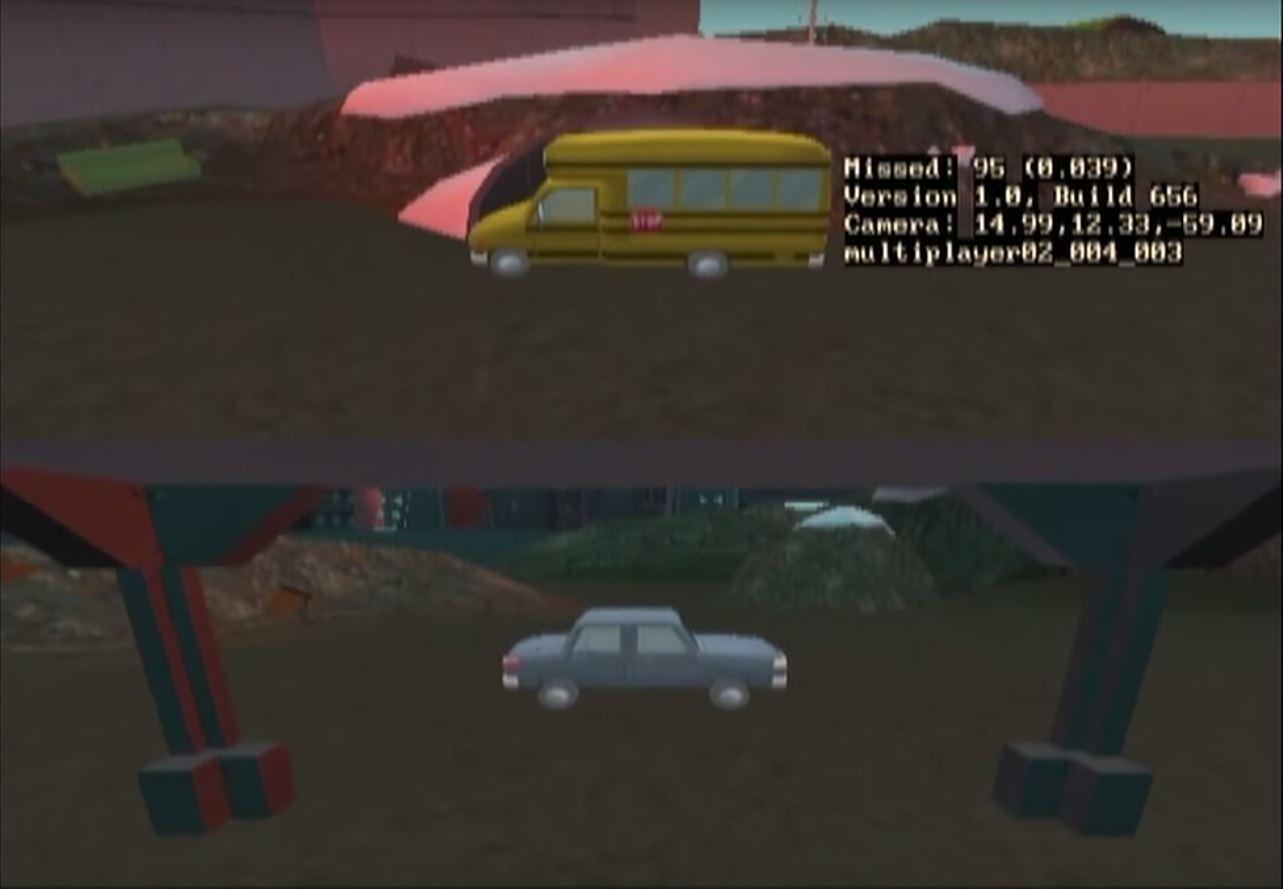 Above: South Park was trying to be all things to all people — it even had a multiplayer mode.

All that work, gone

Everyone at Buzz Monkey was working on the South Park project when Ubisoft called it off. Gause reckons it was about 25 to 30 people at the time.

“Ubisoft pulled the plug, and they didn’t take it to another studio,” he said. “I think in the end it just ran out of time in terms of what the publisher was looking for or needed. It was trying to be all things to all people, and it kind of missed the mark a little bit.”

So everything that Buzz Monkey had built over those months was wasted. It seems harsh, and it caused a lot of financial nervousness at the time. “There was a bit of a scramble on,” said Gause. “Our studio boss worked really hard to bring in new projects.”

The team eventually moved on to work on the Tomb Raider series for Eidos Interactive, but Gause says there were “a lot of sleepless nights” after South Park was cancelled.

Sadly, it’s an all-too-common story in the world of game development.

“I’ve seen projects get pulled for a variety of reasons,” said Gause. “Sometimes just because they think it’s franchise saturation. It seems with publishers, all the projects are competing with each other, so publishers make strategic decisions about which ones they want to put their marketing buy on.”

Gause clarified his point by recounting how an NFL game once got canned as it was ready to head into stores.

“When I was at Acclaim, there was a team that made a football game. They completed an entire game and it was ready to ship, and the NFL decided that their brand was too saturated. They had too many licensed products out there and so they pulled their licence from it. The NFL said, ‘It can’t be an NFL game — if you want to make it you have to take the NFL out of it.’ They’re like, ‘Well that’s the entire game.’” 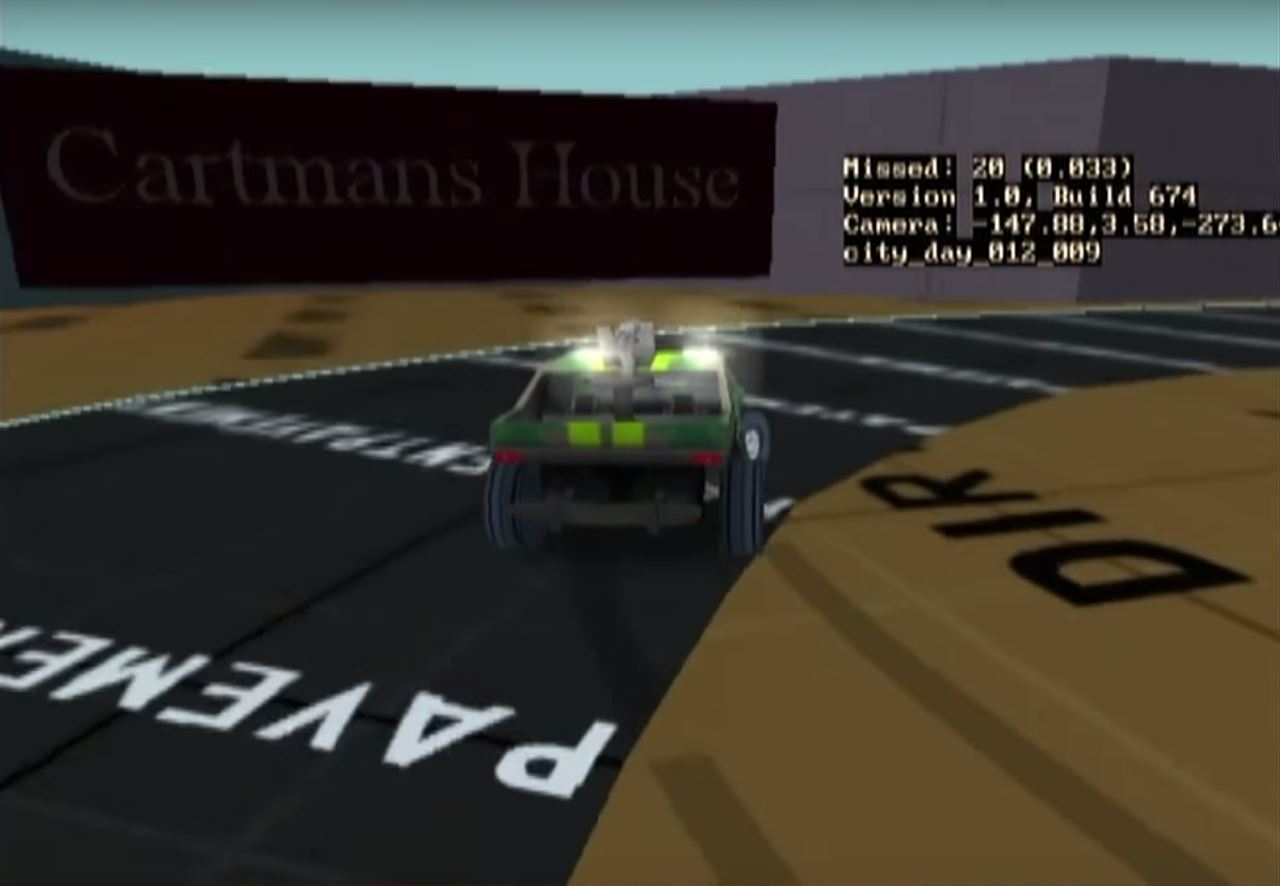 Above: South Park was still in an early development stage when Ubisoft pulled the plug.

Gause is pretty stoked that the South Park game has appeared again after all these years. “It’s kind of cool, actually,” he says. “I’m kind of glad that somebody’s found it and seen the hard work that people put into it.”

But he is surprised that it’s the Xbox version that turned up because most development was done on the PlayStation 2.

He’s also at a loss at to where the other development kits might have ended up. “Ultimately, the IT guy would be the one that knows where everything went,” he said. “At some point all the old equipment [maybe] all just got auctioned off or sold off or something. I don’t know. There’s got to be a disc build somewhere.”

Gause doesn’t recall a lot of press about the South Park game back in 2005. In fact, he thinks Ubisoft was probably keeping it under wraps until it had something more to share. So it’s neat that’s the game’s finally getting its moment in the sun, albeit 10 years too late.

“The team [at Buzz Monkey Software] was really talented,” said Gause. “They put together a bunch of really great folks and built a bunch of systems in a short period of time — building a combat system, building a world-drawing system, a loading system. They did a lot and were really into the project. So much hard work goes into a project that just goes away.

“It’s a kick that at least somebody discovered it and got to report about it. And now it’s kind of becoming an urban legend.”