If the sound and the fury at this year’s Electronic Entertainment Expo, the annual pulsating tribute to video games, reminded us of anything, it’s that business is good. So good, in fact, we left knowing a great wave of cutting-edge entertainment and creative games from independent developers are on their way. And yet, for the time being, smaller companies and games have a small window of opportunity for exposure before the deluge hits.

Spry Fox cofounders David Edery and Daniel Cook know all too well how timing can make or break a career as an independent creator. Though both are now experienced game developers who have managed to carve out success in a brutal industry, they attribute some of their business savvy to lessons learned as former Microsoft employees. Cook was a game designer at Microsoft Studios, and Edery was the worldwide games portfolio manager for Xbox Live.

Both men recall the turning point when independent games found a place in the console scene, namely, the emergence of Xbox Live Arcade as a direct line to consumers hungry for content in a generation just getting off the ground.

“It was a unique confluence of events that resulted in Xbox Live Arcade’s unbelievable success in its early days,” Edery said, having navigated those events from 2006 to 2009 during the platform’s boom times. “But the bottom line is if you were one of the first whatever twentysomething games to ship on XBLA, it didn’t really matter how bad your game was — you were guaranteed a profit. There was a major supply and demand imbalance.” 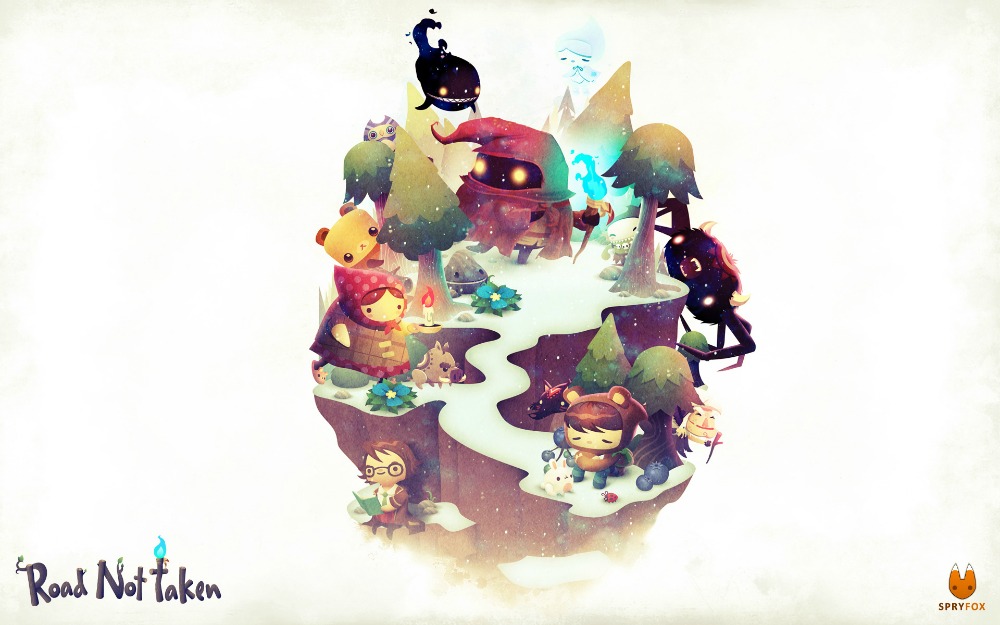 Above: The vaguely fairy-tale world of Road Not Taken.

The right time for a Road Not Taken

That imbalance they hope to take advantage of with their next offering, Road Not Taken, a procedurally generated puzzle game teeming with deep personal themes. It’s en route for an Aug. 5 launch on PlayStation 4, PC, and Mac. Road Not Taken is Spry Fox’s first foray into not only the console market but the new generation, where the demand for games is fierce.

“It’s a new console generation; this is a great time to launch new IP,” Spry Fox creative director Daniel Cook said. “We tend to make new IP. We tend to make original games. We were looking at the landscape and we knew [Road Not Taken] was this … challenging hardcore game at its center. We had seen things like Spelunky do OK and Don’t Starve do OK, and we thought, ‘We should go to PC and Steam.’ And then we saw that those games were also doing well on PlayStation.”

But unlike that perfect storm of events that laid the foundation for indie creators on XBLA, the cultural shift toward independent console releases is now being readily tapped by manufacturers eager to open a vein of creativity as quickly as possible.

“We released our teaser trailer. Sony contacted us literally within 24 hours,” said Edery. “They’re like, ‘Hey, this looks like a good fit for our platform.’ And we’re like, ‘Well, it’s funny you say that because we had started to have inklings of thoughts of that, but this really makes a difference that you’re actually reaching out to us.’”

Sony has certainly cultivated an atmosphere of prosperity for independent studios, and it’s not the only gaming giant to include Spry Fox and hundreds of other indie outfits as part of its console future. Microsoft’s rekindled commitment to independent studios has also reached Spry Fox, and as such, Cook and Edery have found their way back to Microsoft. “We’re in the [ID@Xbox] program now. We’ve talked to [Microsoft] about this game and about other stuff. We’re just delighted to see them embracing indie games.” 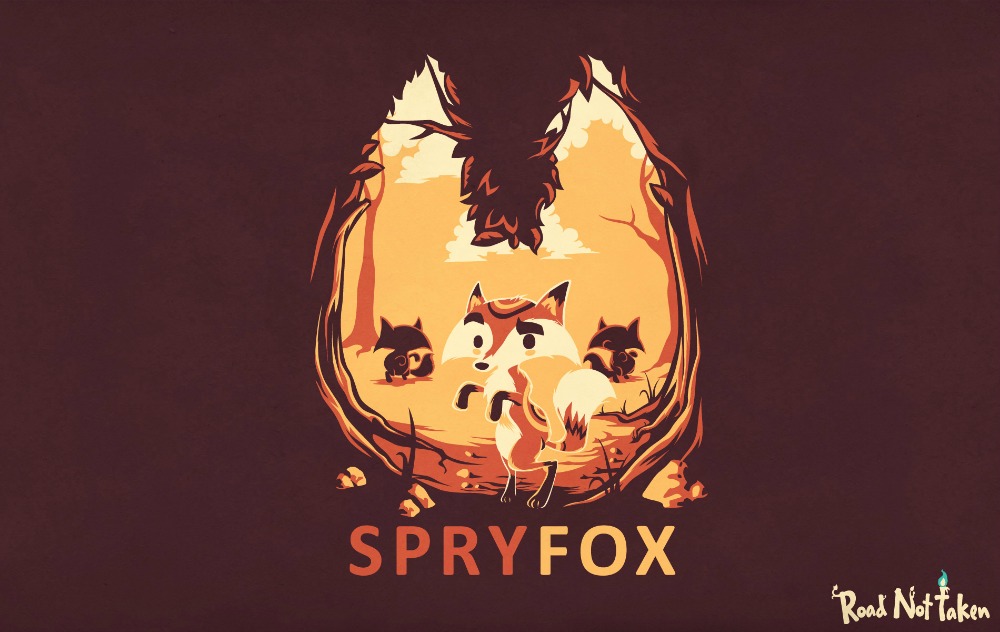 Above: Spry Fox’s logo in the Road Not Taken art style of Brent Kobayashi.

But Spry Fox is in a position where it’s able to totally self-fund the experience it wants to create, cutting out the money men that dictate creative terms and engaging directly with indie-courting platforms. “That means we get to do whatever the hell we want to do whether anyone likes it or not,” Edery explained.

Recounting their experience from the other side the publisher/creator divide, becoming financially self-sufficient is a fortunate place to be, and both Edery and Cook know it. Their first-hand knowledge of the business of making games has afforded them insight into the many pitfalls engulfing so many fresh-faced creators.

“[Many inexperienced indie developers] don’t know what they’re doing business-wise, and they get slaughtered,” Edery said. “It’s really sad to watch such talented people pour their hearts out, work for years on a game, and then get nowhere.”

“I saw people throwing themselves at [Xbox Live Arcade’s] gates and failing to get in, and failing. I saw people who got into the program but then didn’t handle themselves correctly, and fail. I mean, it sucks. It sucks to watch people try so hard and not get anywhere. The thing is, to some extent, in any entertainment business, that’s unavoidable. There will always be more people trying to come in than the industry can support. [Cook] and I both feel really strongly about doing whatever we can to help as many people as we can, knowing there’s obviously no way we’re going to help the majority.”

Both Edery and Cook spend ample time trying to become a resource for fellow creators. They’ve kept a transparent dev journal on the creation of Road Not Taken, and in the past, addressed the Game Developer’s Conference with talks and lectures.

“You can have the best game in the world,” Cook said, “And if you just sit there and say, ‘Well, it’s Field of Dreams, people are going to come because I have this amazing game.'” … “You’re probably fucked,” Edery interjected. “Yeah – It’s over for you,” Cook agreed. “So it’s more about, like, if you make a great game and then you see an opportunity, then maybe you can take advantage of that opportunity. Maybe there’s a window here on PlayStation 4 where we can not have a ton of competition.” 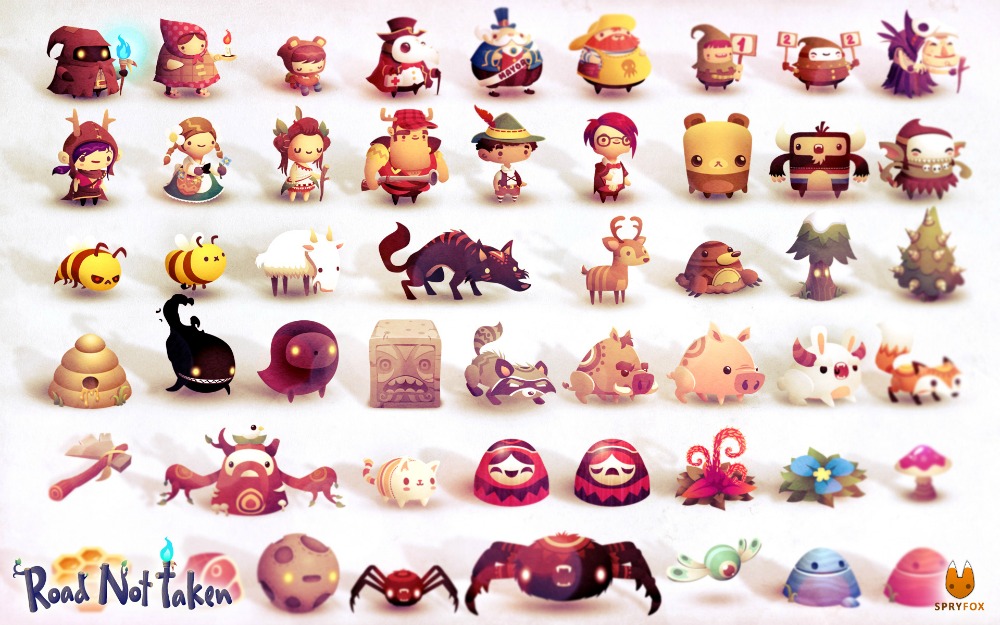 Above: The many colorful characters of Road Not Taken.

The changing of the guard

The rise of the indie developer has also garnered the ire of those who feel such a concentrated focus on independent studios has diluted the industry.

But to Edery, it’s not an issue. “I mean we feel [that backlash]. We’ve done a bunch of blog posts on the PlayStation blog, and it’s really rewarding,” he said, noting the majority of the community appreciates insight into the process. “But then, you know, one in 20 comments will be someone like, ‘What’s with all this indie shit on the PlayStation. That’s not what I bought this for.’”

“It seems like a pointless discussion. It’s not like Activision’s going to stop making Call of Duty because someone made Gone Home. It’s just more, and if you don’t like the more, don’t play it.”

“And I think more culture is a richer culture,” Cook agreed.

“I mean, let’s face it. Making original games is not necessarily the best way to make money,” Edery said. “If we were 100 percent focused on that, we would be doing [a sequel to Spry Fox’s most successful title to date, Triple Town], and that would be the end of it. But there are more important things.”

Cook hopes Road Not Taken changes the way someone looks at the world through its many intimate questions about living the best life possible, or, at the very least, gives his company another shot at reaching similar goals with a new offering. “Not just make another [game],” Edery said, “but make another game without compromising. That’s all we want to keep doing.”