Lost among the numerous post-Super Bowl commercial recaps was any serious mention of mobile’s presence.  Of the 60-odd commercials that ran between kickoff and the final whistle, three mobile games advertised their apps —Game of War, Heroes Charge, and Clash of Clans— and two of them used A-list celebrities to do so.

It had an effect.

According to App Annie, each game experienced a serious boost in downloads following the airing of their commercial.  On Sunday, Game of War rose 21 spots to claim the 18th overall spot on the App Store charts, Clash of Clans climbed nine ranks to 29th overall, and Heroes Charge, a comparatively little-known game, skyrocketed 647 ranks after running just a single 15-second spot in the fourth quarter.  This is an especially outstanding result when you factor in that Heroes Charge has been running television ads since October yet remained mired in obscurity, completely unranked in the overall charts.

The impact was felt beyond the initial ad impressions as well.  According to data from iSpot.tv, the cumulative social media activity during the Super Bowl among the three games was nearly a million YouTube views and just over 85,000 Facebook shares.

Yet, the ads rang in at an average of $4.5 million dollars, excluding the costs of production, never mind hiring Kate Upton or Liam Neeson. A positive ROI remains to be seen. Had these games spent that same $4.5 million advertising for a week on mobile, a sample media plan we prepared demonstrates that they could have reached an estimated 125 million unique viewers, over 576 million impressions (across social, video, RTB, and incent) over 27 million engagements, and nearly 2 million downloads. This would have driven popularity and rank at a rate comparable to the Super Bowl advertisements — but achieved a far greater number of loyal users.

Regardless of the efficiency of the spend, the splash the ads made was huge, and it appears that mobile Super Bowl advertising is here to stay. “For a small indie dev, we’ll be learning from this experience and talking with our industry peers to get ready for an even better Super Bowl 2016 showing,” said Benjamin Gifford, the VP of user experience for Heroes Charge developer UCool, in Adweek. 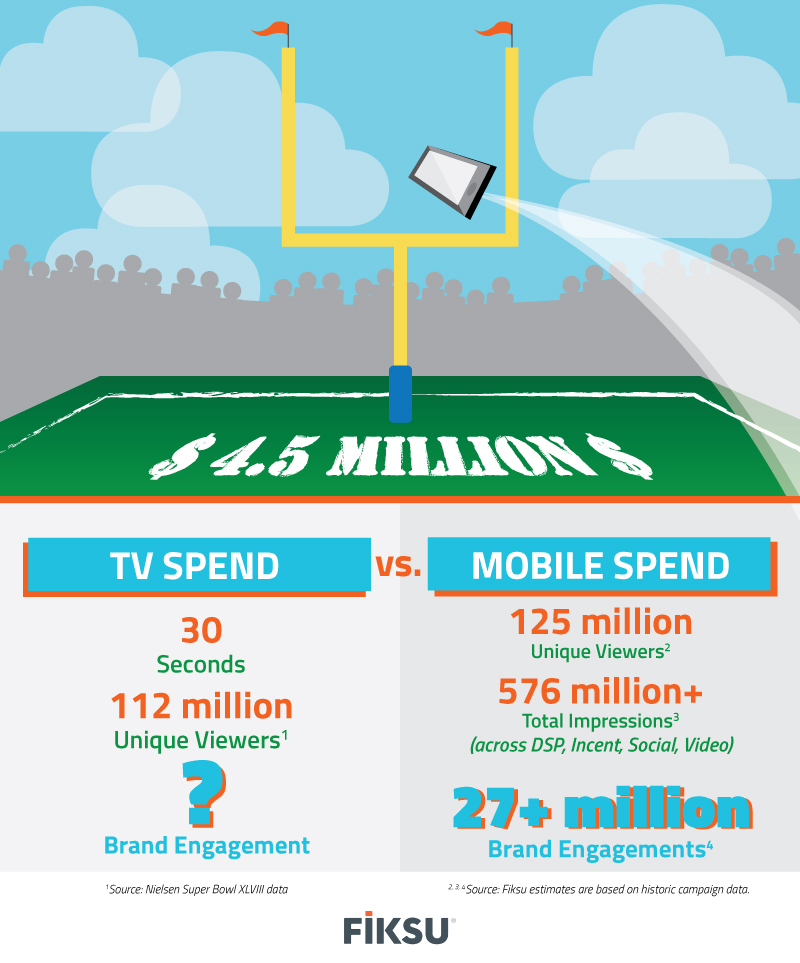 For starters, this Christmas saw fewer marketers spending than any season prior, as many of them have found advertising during the holidays simply not worth the premium costs and daunting competition. Over the past few months, the same, unmovable stalwarts (YouTube, Facebook, Snapchat, etc.) have dominated the App Store Top 10, and trying to unseat them on a day when so many people are downloading apps to fill their new devices has proven extraordinarily difficult—if not downright impossible. Judging from this past Sunday, it’s become increasingly apparent that marketers are shifting their attention away from the ultra-competitive Christmas holiday and toward more targeted events like the Super Bowl, which carry an almost equally impressive number of eyeballs.

Second, games have long been at the forefront of mobile advertising.  Just as they were the first to take advantage of advertising over the Christmas holiday, only to later abandon it, they may be leading the charge in an eventual mobile ad-heavy Super Bowl.  Could brands soon be advertising their apps directly? We’ve seen it already during regular TV ads, and Geico, Discover, and Mercedes ran Super Bowl commercials in which the use of apps was prominent within their ads (though they were not for the app themselves). Or will we see more call to actions at the end of ads, as opposed to the ubiquitous Twitter hashtags of this past Sunday? Either seems likely.

I’m still not convinced of the viability of television advertising in comparison to mobile, especially considering what little effect it had on Heroes Charge in the months leading up to the big game. To me, it seems similar results could have been achieved more efficiently with a smaller investment.

Either way, the Super Bowl offers an unprecedented opportunity to achieve outstanding reach. It’s hard to argue with the plethora of published countdowns, recaps, and all-around number of eyeballs. But for marketers seeking measurable ROI, mobile marketing has matured to the point in which reach and efficient ROI can be achieved simultaneously.