Pitching is tough, and to do it in less than 140 characters is even tougher. One game developer who grabbed our attention with his Twitter pitch a few weeks ago was Paul Brighton, the creator of Illuminascii. It’s a first-person roguelike game with a unique visual style. He didn’t even use all his 140 characters, managing to sell us his game in just 39.

Availability: PC and Mac releases are scheduled for mid-2015.

Why I picked this: I grew up in simpler times, playing simple games that relied on keyboard characters (and a whole lot of imagination) to bring them to life. That ‘O’ is my skiier? I have to avoid the “/”? Sure, I could dig that. So when I saw Illuminascii’s weapons made entirely of ASCII characters, I knew it was a game for me. That I could also play as “John the economical undead assassin” or “Margaret the patriotic goldfish thief” just made it better. 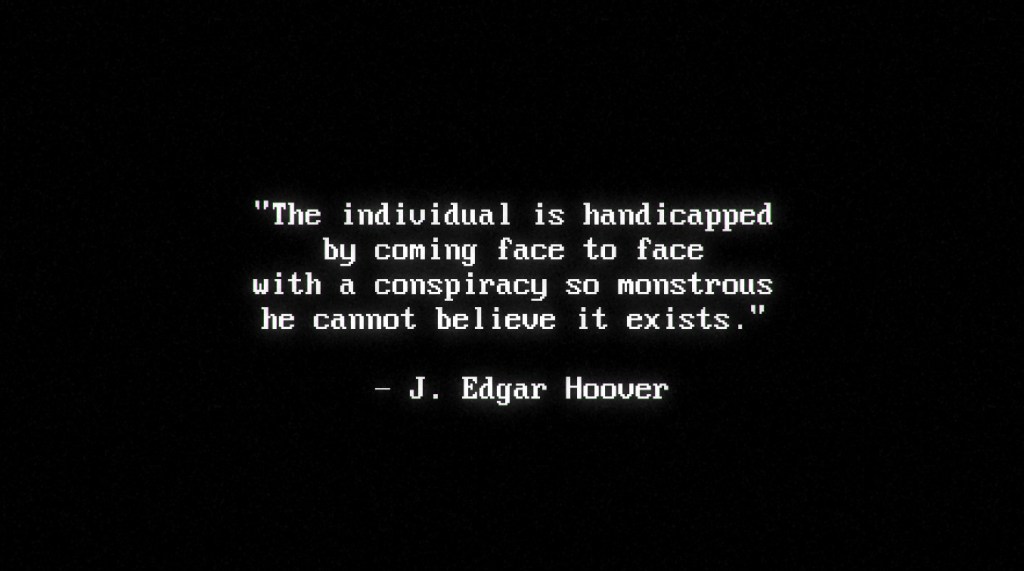 Above: Illuminascii is positively dripping with conspiracy theories.

What is it? Illuminascii is a surreal first-person shooter set in a mysterious neon-lit world of conspiracies and clues. Playing as the lead character, “@,” you must survive the attention of bizarre ASCII creations like Generic Rats and Invisible Snooker Tables, armed initially with a pistol and a little ammo. It’s a roguelike game that supports multiple playthroughs, with levels, items, and enemies randomized each time.

Developer Paul Brighton says he has a pretty paranoid nature, but insists that he’s not a conspiracy theory believer himself. His irreverant sense of humor definitely shows through in the game he says was inspired by acclaimed dungeon-crawler The Binding of Isaac, old-school shooter Duke Nukem 3D, and the classic 1987 ASCII roguelike NetHack.

Is it good? While Illuminascii is still a work in progress, its quirky visuals and offbeat humor definitely make it worth checking out. The gameplay is smooth, and the joy of kicking in doors with your ASCII-generated leg never gets old.

I found Illuminascii pretty tough at first, often running out of ammo and getting overwhelmed by strangely-named enemies. My frequent deaths were tempered by the small joy of receiving a detailed record of my small successes, however. Rest eternal in Valhalla, Rebecca the enchanted golem comedian. Your death did not go unnoticed.

Above: Illuminascii details your successes and failures each time you die.

Brighton points out that you really need to conserve your ammo to succeed in Illuminascii. “The game is supposed to be moderately difficult,” he told me. “There is a learning curve and conservation of resources is encouraged. A lot of the random generation means you are subject to the whims of the random number generator. Some runs will be better than others.”

Look for it: Brighton says he’s adding additional levels to the game, along with additional enemies and story elements. He’s hoping to release Illuminascii in mid-2015. You can vote for it on Steam Greenlight.

This is the fifth of 10 selections from our “Pitch us in one Tweet” contest. You can find the rest of our choices by following this tag.