Organized crime simulation may not be revolutionary in video games — hell, one of our biggest franchises is named after a felony — but indies who dabble in tales of the streets have an edge over big publishers. With no watchdogs or special interest groups knocking down their garage doors, underground gaming cooks can whip up a batch of content that pushes the envelope on taboo social subjects.

At number seven in our top ten “Pitch us in one Tweet 2014” contest, we take a hit of Half Bus’s Basement. An indie take on the illegal drug empire business. 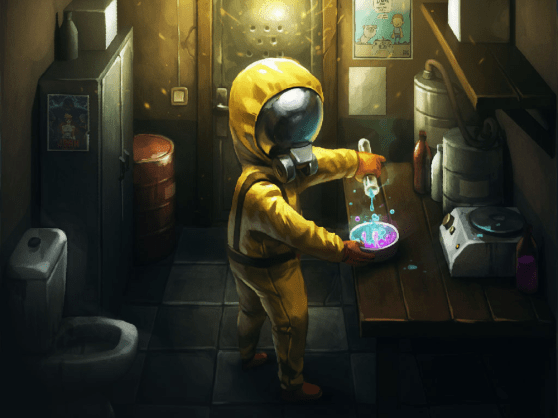 Above: A toilet in your lab? Where the hell are your standards?

Why I picked this: I’ll admit that, text wise, this isn’t a very impressive pitch. What really got my attention, however, was the concept art that was attached to said tweet. The image of a stylized drug cook in a hazmat suit, putting in work under questionable lab conditions, evoked a vision of Breaking Bad: The Video Game. It teased my imagination while tackling my attention.

There were a few other entries in this contest that caught my eye in the same way. Although some pitches that succeeded with text alone, the ones that provided a great visual to compliment those words got me typing a developer’s name into a search engine the quickest.

Let this be a lesson for other indies: It’s all about a great gameplay concept in the long run, but a good visual presentation is invaluable. Especially when it comes to convincing people to stop what they are doing to give you a few minutes of their time. 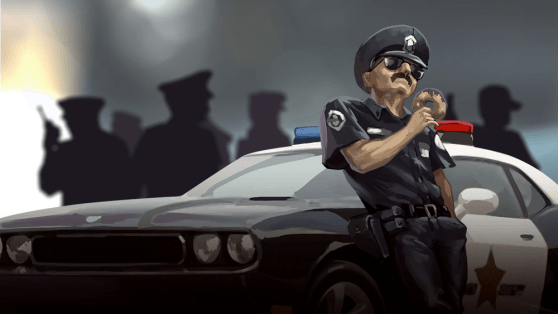 Above: If only these guys took bribes in donuts…

What is it?: Players take the role of a scientist with a ground breaking cure for cancer. The problem is that this medical miracle is going to take a lot of cash to bankroll. With potential backers requiring too much bullshit to fund the project, our hero decides to raise the money himself the old fashioned way: slangin’ llello.

The core mechanic of Basement is like a mix of The Tower and Lemonade Stand, where players build their drug empire underneath the foundation of a legitimate looking store front.

Where to build, what type to construct, and how large of a drug lab you wind up placing depends on several factors. The key is to create kitchens that strategically maximize the use of space, maintain the amount of resources needed for a healthy production, and that meet the changing demands of the clientele.

Wannabe Heisenbergs will face other issues outside of maintaining a healthy supply and demand. Narcs waging a war on drugs are eager to bust any operation that doesn’t pay up their bribes. Lab cooks require a competitive market wage to keep from jumping ship. And there is always the risk of potentially wiping out a kitchen or two from an accidental explosion (we are dealing with meth, after all). 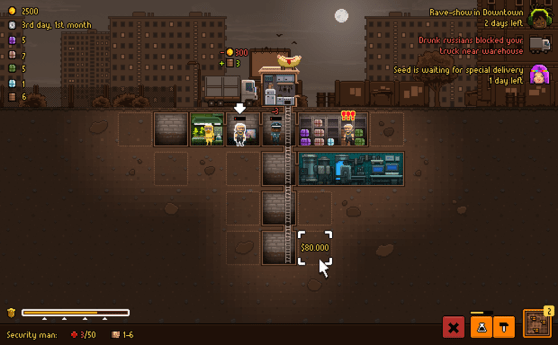 Is it good?: Basement has potential, it’s just going to come down to execution at this point. Half Bus currently has a demo of an extremely old version of the game available online, which is more public-prototype than public-beta.

Being that this version is so early in development, I don’t recommend just anyone checking it out. It’s in that exciting sketchy stage of development where the very basic framework of a functioning game is sputtering to life. The basic supply and demand system is implemented and you can build different types of drug labs, but the gameplay is still very raw. It’s a lump of early design that is in desperate need of tweaks and balancing.

If you don’t have the patience for unfinished work, hold off until HalfBus releases a demo that is much closer to their Kickstarter vision.

Look for it: Half Bus is shooting for a Steam release around Spring 2015.

For more info: You can check out Half Bus’ official site for more general information, but their Kickstarter page has a lot more details on what the scope of the project looks like.

This is the fourth of 10 selections from our “Pitch us in one Tweet” contest. You can find the rest of our choices by following this tag.