I have yet to master the art of making my trivial thoughts sound interesting on Twitter (I have a draft folder full of tweets that I deemed too dumb for public consumption). That’s why I have the utmost respect for the independent developers who participated in GamesBeat’s “Pitch us in one Tweet” feature.

A few weeks ago, we asked developers to pitch us their game via Twitter (limiting their responses to 140 characters or less), and the entries ranged from being cool and creative to “WTF is this?” After a lengthy debate process that involved blood sacrifices to our game journalism cabal, we managed to narrow down the list to just 10 games.

Why I picked this: The picture caught my attention right away because of how it seemed to justify the superlatives in the pitch. The pixelated art style is almost a cliché now when it comes to indie games, but I love the way Slain looks in that screenshot. And the more I stared at it, the more questions I had: What the hell is going on with that ominous dragon tree? Where is that floating head coming from? Why is the guy carrying a sword that’s almost as tall as he is? I just had to know.

What is it? Slain is a 2D action game and platformer that has two types of levels: The combat-focused side-scrolling bits you see in screenshots here, and vertical tower areas that you have to climb or descend while solving puzzles. The hero, an incredibly fit older gentleman by the name of Bathoryn, has to destroy seven towers and the evil creatures that live within them to free the land from their control.

Is it good? The demo that developer Andrew Gilmour sent me was a pre-alpha build — some of the animations were still rough, and except for the catchy tune in the menu screen, it didn’t have any music — so it’s too early to pass judgment on it. But I did like what was in there. The demo had a total of four different side-scrolling levels, all in various stages of completion. Bathoryn had a few basic sword attacks, which sometimes led to satisfying decapitations. He also had a screen-clearing magic attack that got me out of tight spots.

Since the demo is brutally difficult, I spammed this magic attack as much as I could by using some built-in cheat buttons that gave me unlimited health and mana. If I didn’t kill my enemies as soon as I saw them, they would group up and kill me in seconds. Cheating was the only way I could pass through the endless horde of demons and reach the boss fights.

It doesn’t sound like Slain will get much easier: Gilmour told me that the finished game will have an “evolved combat system,” bigger bosses, and (I imagine him twirling his mustache as he told me this) a lot more ways to die. 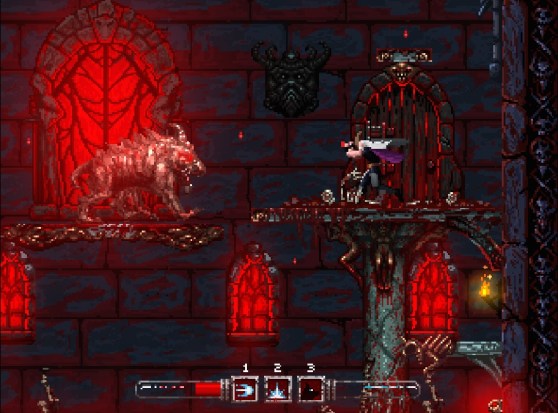 Above: Slain has some gorgeous looking levels.

Look for it: Developer Wolf Brew Games are just working on the PC version for now, but it hopes to eventually release Slain “on many more platforms.”

This is the third of 10 selections from our “Pitch us in one Tweet” contest. You can find the rest of our choices by following this tag.